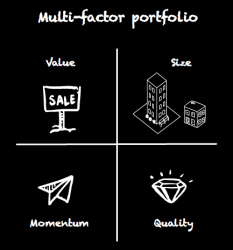 With a catchy title like Building a multi-factor portfolio with iShares FactorSelect MSCI World ETF, this post should go viral like anthrax any second. Any second now…

While we wait, if you fancy superior portfolio diversification and the potential to grind the market performance under your heels, it’s time to look at the new multi-factor ETFs out there.

The pitch? Ready access to the investing rocket fuel known as the return premiums (or risk factors) in one family-sized power pack.

The risk factors are purified concentrations of equities that have historically beaten the market.

The value factor, for example, focuses on companies that appear cheap in comparison to their fundamental value.

If you’d tilted your portfolio towards these kinds of companies you’d have done very nicely in the past. And who knows? Maybe in the future too…

In the case of the iShares FactorSelect MSCI World ETF (IFSW), you gain exposure to value, momentum, size and quality, as well as the global developed market.

And that’s a particularly fruity combination of factors. They are complementary, like a band of heroes where one’s the muscle, one’s the brains, one’s the healer, and one doesn’t seem to do much but sure is pretty.

History and academic research tells us:

Negative correlations1 are the holy grail of portfolio diversification because as the fortune of one investment wanes the other often waxes.

It’s a bit like placing your bets on Bond and Blofeld. When Bond is on the rack with a laser cutter pointing at his testicles, Blofeld is usually laughing his pink crash helmet off. When Blofeld’s volcano base is on fire, Bond is usually off nobbing some beautiful Russian agent.

The idea is that you’re backing whoever’s winning at the time, which means your overall portfolio returns tend to be more consistent and less subject to catastrophic downfalls.

Okay, that’s a colourful oversimplification that will probably blow The Investor’s pedantry fuse, so let’s have a more instructive, real-world example.

We can compare the one-year returns of the four factors in iShares’ single-factor ETFs, along with the plain ol’ world ETF. 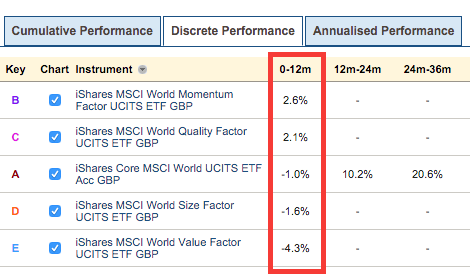 We only have returns for one year because iShares’ factor funds are so new.

As you can see, both the size and value factors went into negative territory last year scoring -1.6% and -4.3% respectively.

In fact, both factors underperformed the market which delivered -1%.

So far, so miserable.

But what’s this? Momentum and quality rode to the rescue with respective returns of 2.6% and 2.1%! Both factors beat the market and put in a positive shift as size and value hit the skids.

If you’d put all four factors into a single portfolio then you’d be hoping that over time the positive returns outweigh the negative and romp past the market return, too.

And (fortunately for my example) that’s roughly what happened last year.

A portfolio quartered between the factors would have returned -0.003 (let’s call it nothing shall we?) while the regular world portfolio lost 1%.

But they are the essence of diversification, whereby you maintain good returns over time and aren’t caught out when a particular asset or factor falls from grace for years on end.

Too many eggs, not enough baskets

One of the reasons why factor investing is hard is because a single factor can underperform for a decade or more.

Investors lose faith, sell, collect their poor returns, and wander off to graze on whatever’s looking better at the time.

But well-structured multi-factor funds could be the antidote.

As Jared Kizer of the respected BAM wealth management group has shown, while the market delivers positive returns in 60% of all months, at least one factor will deliver a positive performance in 96% of all months (Kizer’s study combined the market, size, value and momentum factors).

So while a multi-factor fund may not trounce the market – which a more concentrated bet such as a value fund can occasionally do – it’s also less likely to get absolutely spanked and make you do something dumb when the negative numbers seem to blur and then coalesce to spell the word IDIOT.

Of course, you could invest in individual factor ETFs for yourself.

But aside from being easier to use, a multi-factor ETF also has the potential to be cheaper than separates because you don’t have so many funds to trade.

It will also rebalance internally for you, again saving on trading costs and also saving you the mental anguish of selling winners and buying losers.

A multi-factor fund further filters out some of the contradictions of holding negatively correlated factors like value and momentum.

In a separate-fund situation, you can find that a share is sold (perhaps because it has lost momentum) only to be bought by the other fund (because it now qualifies as value).

A fund like IFSW, however, is looking for smaller sized, quality firms with momentum that are cheap. So its turnover should be less than a fund that’s only looking to buy and sell along a single dimension.

So is IFSW the multi-factor fund we’re looking for?

Well, it’s the only choice we’ve got if you want a combined package of value, momentum, quality and size.

Its closest rival is the Amundi ETF Global Equity Multi Smart Allocation Scientific Beta (SMRU). While the name is as cuddly as a killer robot, the ETF itself tracks value, momentum, low volatility and size. (Like a cuddly killer robot.)

I’d rather have quality as part of my factor set but this is still a decent combo, so I’ll look into SMRU separately.

In the meantime, IFSW has a reasonable OCF of 0.5% and it tracks the MSCI World Diversified Multi-Factor Index.

MSCI have published a paper that explains the index in-depth and provides more transparency than most smart beta products. A good sign.

IFSW only launched in September 2015 though so it’s impossible to say yet whether its results will add anything in comparison to a vanilla world tracker.

In all honesty, we’ll need a minimum of three to five years of data before we’re judging on anything more than noise.

What I really want to know is whether IFSW is worth holding as a portfolio diversifier.

Unfortunately, it’s too new to be subjected to a Morningstar X-Ray that can identify overlap between fund holdings.

But a manual comparison of IFSW’s assets against its vanilla cousin, SWDA (iShares’ core world tracker), suggests that the two are sufficiently different.

IFSW is unlikely to go down any bizarre investment rabbit holes either.

In the past, Monevator readers have looked at global smart beta funds, only to retreat in horror when they turn out to be concentrated 70% in Japan Consumer Staples or something similarly exotic.

But MSCI has put limits on how far the multi-factor index can differ from its vanilla world parent index.

That shackles IFSW’s ability to blow the world index away in terms of returns. But it also curtails the risk of it deviating dramatically down from the market and making it feel like you own a pair of concrete boots instead of a fund.

Before taking the plunge, you should also check the index methodology’s explanation of its factors.

I, for one, am not convinced by MSCI’s definition of quality, as I have previously explained.

The value and momentum definitions also stray significantly from the classic formulas used by academics that have lain the foundations for factor-based investing.

That’s not necessarily a bad thing. It’s widely recognised that there are many ways to skin a factor cat.

Moreover, different factor metrics will outperform at different times, which leads many commentators to believe that multiple metrics are the way to go because they provide another form of diversification.

But it’s impossible to tell if IFSW’s multiple metrics will excel in the future, so I’d personally be more comfortable if it tacked closer to the classic formulas that have proved historically robust.

In the absence of that – or any real multi-factor competition – IFSW gets a cautious nod as a welcome portfolio diversifier.

Next post: Weekend reading: A chance to hear Lars Kroijer speak in London

Previous post: Weekend reading: Pain today, but pain tomorrow too if you don’t know what you’re saving for