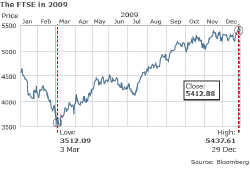 Everyone with an opinion about the stock market was confounded in 2009 – even those of us who thought shares were cheap in March covered our backs with long-term caveats.

Nobody predicted markets would bounce back 50% by December, proving again the adage that stock markets always do what will surprise the most people.

I’ve pontificated like everyone else in 2009, and while I think my commentary was pretty reasonable, nobody can predict markets in the short-term. A focus on valuation and contrarian thinking provides some defense, but it doesn’t make you Mystic Meg.

As far as 2010 goes, experts say those percentage gains are not likely to be repeated. Governments are expected to withdraw economic support and there are concerns that businesses and consumer may struggle without it.

Even with a 60% gain since the lows in March, stock investors have lost money this decade when total returns (including dividends) are taken into account. Few will be overwhelmed with the long-term performance of their portfolios.

Exactly one year ago, did you predict that the market would do so well by the end of the year? I sure didn’t. While we face real challenges ahead as a nation and as investors, it would fly in the face of all the facts to become pessimistic right now.

The QE rally is just getting under way but there will be a big bump due to the end of QE and the election. I expect another rollercoaster year which will be great for trading, if a bit stressful. However, by the year end people will buy into stocks as they prepare for the coming inflation.

Corporate earnings are likely to be higher this year, but most of these gains will be down to cost-cutting rather than a significant boost in sales. That is why it is important to have a global perspective.

2010 is the year of metal tiger according to the Chinese five element astrology calendar. Ergo, being contrarianly minded, I can safely say that gold will have a bad year, unlike other metals and commodities in general.

Robert Peston (via the BBC)

First, the Chinese currency must surely rise. China’s authorities will surely be unable to keep the cork in the bottle, when their economy looks so much stronger than the US’s.

Second, even without a sterling crisis, the interest rates paid by the British government must surely increase and the price of gilts (of all maturities) must surely fall.

This decade in markets has been turbulent to say the least. The markets have absorbed the end of the technology boom, the effects of the September 11 attacks on the US and the invasions of Afghanistan and Iraq. Markets recovered and were inflated by the boom times of high house prices and record corporate results only to be shocked by the credit crunch, sending indices around the world sharply lower and instilling fears of a second great depression…

[On Japan’s dire performance] In the third quarter of 2009, nominal GDP sank below its level in 1992, reinforcing the impression of not one but two lost decades. Deflation is back in the headlines. On December 29th the Nikkei stood at 10,638, 73% below its peak. Urban property prices have fallen by almost two-thirds. Some ski apartments are worth just one-tenth of what the “bubble generation” paid for them

The uselessness of these predictions was carefully explained by the Ancient Greek philosopher Socrates, two and half thousand years ago. Not letting death, the lack of Ancient Greek stockmarkets or the fact he lived in an economy based on slavery get in the way of a good analogy, Socrates noted that he, at least, knew what he didn’t know. Which in investment analysis terms is about as close to an epiphany as you’re likely to get.

Many money bloggers wrote more personal reviews of 2009, including Amateur Asset Allocator, Financial Samurai, Fabulously Broke and Get Rich Slowly, while Len Penzo did his own inimitable thing!

Finally, an unrelated bonus link for anyone who made it this far: Mike at Oblivious Investor put me onto this great conversation between Charles Kirk and the Coffeehouse Investor.

Happy 2010, and do read my article on making new year’s resolutions work if you’re feeling resolute.

Previous post: My 10 rules to stay sexy and save money