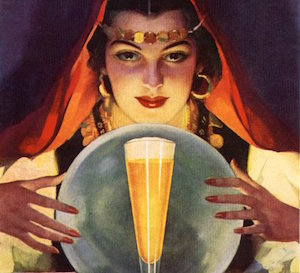 Today I’m going to talk about the Rule of 300. This shortcut helps you envisage how much money you’ll need for retirement or to achieve financial independence.

That’s right! The rule of 300 turns an amorphous future you into a flesh and blood creature with their own wants, needs, and bank statements.

Most of us find it difficult to imagine paying for stuff several decades hence. The Rule of 300 handily bends the space-time continuum.

However let’s get one thing straight.

The Rule of 300 is not a scientific law that can’t be broken. On the contrary it will probably always be off a bit. It’s just a rule of thumb.

The assumptions behind the Rule of 300 are open to debate.

Equally, anyone who thinks they can predict exactly what will be on their bill in 30 years’ time – from the cost of robot insurance to the price of a mini-break to Mars – is delusional.

But as always with investing: What’s the alternative?

All forecasting methods have their downsides. Few compensate for them by being as simple as the Rule of 300.

I will return to the caveats later. Once you know what assumptions you disagree with, you can replace them with your own guesswork.

Let’s first outline the rule as it stands.

Take your monthly expenditure. Multiply it by 300. The result is how much you’ll need to have saved to keep living like you do today after you jack in your job.

(Or to tell The Man to go hang. Or to safely smirk in meetings. Or to swap your job to do something less boring for money instead. Or to keep loving your job with a safety buffer. You decide!)

Be sure to multiply 300 by your monthly expenditure today. Not by your monthly salary, or a guess at what things will cost in 20 years, or by two-thirds of your income or anything else.

Simply put in your expenditure as it stands, and the Rule of 300 tells you what you’ll need to have saved to keep spending like that from your capital.

Do not include any regular ISA or pension payments. For the purposes of this calculation we’re assuming you stop saving and start spending.

A spartan guide to using the Rule of 300

The Rule of 300 is the easiest maths you’ll ever do in personal finance. But to save you even more bother, here’s a table that shows how much you’ll need saved according to the Rule of 300, based on various monthly expenditures.

Depending on your circumstances and penchant for caviar, those numbers may seem dauntingly high or encouragingly achievable.

Are you in the “HOW MUCH?” camp? Then Rule of 300 could be extra useful. It can help you envisage what your various monthly spending habits will cost you in capital terms.

Let’s say you spend £6 a month on Amazon’s music streaming service. Multiply that by £300, and voila – you can see you need £1,800 to keep the music playing indefinitely.

However you may have other more questionable commitments:

I’m not judging. If your idea of retirement bliss is playing golf as often as possible, then something has gone wrong if you don’t plan on paying for club membership.

The point is that by looking through the lens of the Rule of 300, you might be motivated to cut the things you don’t care about so much.

This way you can reduce how much you need to save for financial freedom.

The safe withdrawal rate (aka the caveats)

The maths behind the Rule of 300 is based on a safe withdrawal rate (SWR) of 4% a year.

The SWR is said to be the money you can theoretically spend every year from your portfolio without (too much) risk of running out before you die.

To say the safe withdrawal rate is controversial is an understatement. It’s the personal finance equivalent of the Kennedy assassination. Different people take it to mean different things, which may even be contrary to the original research.

Some are dubious because it’s based on US investment returns, which have been strong compared to the global average. They say 4% is too high.

Others add that today’s low interest rates mean return expectations (and hence the SWR) must be lowered, too.

Yet others believe that’s too pessimistic. Yields should rise eventually, and anyway the 4% rule was stingy when markets did well so there was arguably a buffer in there.

Newer thinkers even claim the SWR strategy can be improved by assuming variable withdrawals as conditions fluctuate.

Finally, old active investing luddites like me presume we’ll never touch our capital, but rather live off our income. We often coincidentally target the same income yield of around 4%, even though the key SWR research was based on potentially spending everything.

Roll your own Rule of Whatever

I’m not proposing to solve the SWR debate today. Just know that you can tweak the Rule of 300 to suit your own beliefs by reworking the maths above.

Personally though, I’d stick to the Rule of 300.

You’ll read all kinds of authoritative sounding comments about what is the best number to use for either the SWR or as a multiplier.

Reflect on them but understand nobody knows because we don’t know how your investments will pan out, how long you’ll live, and nor how much money will really be required in the future for a decent standard of living.

And it is only a rule of thumb. Keep it simple, Sherlock.

Not one rule to rule them all

Despite my rather analytical education, I’m not one for precise modelling in anything other than the underwear department.

Unlike my co-blogger I don’t track my expenses or stick to a budget. I prefer to keep a rough idea of cash flows in my head.

I’m also not one for working out the exact amount of capital to target for some potential retirement in 23 years and three months’ time.

I’ll sometimes look at what’s needed to replace my current income, but only as a ready reckoner. (That method targets pre-tax salary, unlike the Rule of 300’s after-tax spending. Both have their uses.)

Good for you if you prefer precision – I’ve nothing against it. We can all learn from each other.

But even if that’s you, the Rule of 300 takes zero effort to apply in your everyday thinking. You may have a 20,000-cell spreadsheet back home in the lab, but the Rule of 300 can still be a useful shortcut in conversation.

Of course most people out there don’t even have a financial plan on the back of a napkin. They haven’t the foggiest what they’ll need to have saved when they no longer receive a regular pay cheque.

Many are deluded. Some think they’ll enjoy round-the-world cruises on the back of saving £50 a month today. Others believe they’ll need so much money that stopping working is an unrealistic fantasy.

Does that sound like you, or someone you know? The Rule of 300 can be a good start in getting a grip on things.

No, it is not a scientific law. But in terms of revolutionizing how you think about your financial needs, the Rule of 300 could be as significant for you as that apple that fell on Sir Isaac Newton’s head was for him.

Next post: Weekend reading: Still dithering our way to Brexit