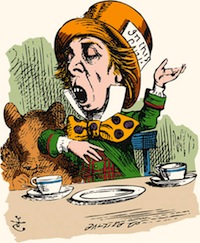 A friend of mine has a knack of homing in on financial folly like a dowsing rod waved above the Atlantic finds water.

This week he proudly informed me that he’d bought a short ETF.

He hasn’t done so because he’s got too much money and thought the financial services industry deserved a donation, via yet another poorly understood product.

No, he believed that holding a short ETF would help protect his portfolio if we are hit by further bear market declines.

It might sound good in theory – although I’d argue it’s better to think about portfolio protection before the market has already slumped 20% and the crash is mainstream news, and that the best way to reduce your risk is simply to sell – but anyway, the maths of how a short ETF works is rather different to what my friend imagined.

If my friend holds the short ETF the way he planned to, he could lose money even if the market does fall.

Insurance that costs you money when you expect it to pay out is surely even worse than having no insurance!

In this post I’ll explain why my friend was wrong to buy a short ETF to try to insulate his portfolio from a prolonged downturn in the stock market. (Next week we’ll consider what he might have done instead).

What is a short ETF?

A short ETF (also called an inverse ETF) is an Exchange Traded Fund that delivers the opposite of the daily return from its underlying benchmark – often an existing, conventional ETF.

For example, the db X-Tracker FTSE 100 Short Daily ETF from Deutsche Bank (factsheet) delivers the opposite of the return you’d get from the bank’s normal FTSE 100 ETF tracker.

You can also get leveraged short ETFs, which usually have 2x or 3x in the title. As the name implies, these ETFs return two or three times the opposite of the daily return of their benchmark.

Short ETFs are synthetic ETFs with the usual risks you’d expect from such securities, such as counterparty risk.

But there’s a more fundamental problem with short ETFs – at least in the way many uninformed buyers aim to use them.

The snag: The only way is not up

The problem arises due to the way that the mathematics of compounding works.

Maths will probably not be on your side with a short ETF should you hold it for more than a day or two.

Over one day, short ETFs do what they say they’ll do on the tin (not that every buyer reads the label). They deliver the opposite of the benchmark’s return.

The trouble comes if you hold a short ETF for more than one day, let alone the weeks or months my friend had planned in order to try to offset any losses from a falling stock market.

Because of the impact of compounding, longer-term returns will be more or less than you’d expect from simply summing the inverse of the daily returns.

Examples of how short ETFs work in practice

This is all pretty counter-intuitive, so let’s illustrate it with a couple of examples.

Let’s say we’re bearish about the FTSE 100, because it’s just broken through the 10,000 level and we think that’s quite enough for now.

If the market falls 1% in a day, for example, Harry expects to gain 2%.

We buy our ETFs on Monday. Let’s say we’re even luckier than we deserve given we’re punting on a single day’s return from the FTSE. The market falls 2%.

Here are the returns1:

All as expected so far.

Now we get greedy and think the market will keep falling. (Why are we so confident? Perhaps we heard it on CNBC. Those guys are never wrong…)

Let’s say the market falls 2% a day every day for the rest of the week.  That’s five days of 2% declines.

Here’s how our returns stand by the end of play Friday:

As you can see, the way the compounding works, the FTSE 100 index has declined by a little less than the 10% you might have expected.

Similarly, the short ETFs are both more than 10% ahead. Already we can see the returns aren’t the simple opposite of the underlying index, due to compounding.

Incidentally if the market had actually risen by 2% a day – thwarting our purchase of the short ETF – then this relative performance would have been reversed.

Sometimes markets go in one direction for a week or so, but in practice they’re usually more volatile. Two steps forward and one step back is more common, whatever the overall direction of travel.

Here’s how our two short ETFs perform in a bumpier market:

In this example, the index has declined by 5.47%, but the short ETF has only climbed by 4.48%. Meanwhile the 2x short ETF has grown far less than the near-11% gain you might have expected from simply doubling the index’s decline.

All sorts of different outcomes are possible depending on exactly what numbers you plug in. Try creating a spreadsheet and having a play.

Example 3: A volatile yet flat market

Perhaps the most shocking example of how you can come unstuck with a short ETF is when the market is flat over the period, yet you still lose money.

Take a look at this sequence of returns:

Here we see that after five very volatile days, the index has ended up exactly where it began.

In contrast, we’ve lost money on the short ETF and Harry has pretty much taken a bath on his 2x leveraged one!

This isn’t because these ETF products don’t work. They are doing what they are meant to do, which is deliver the opposite of the daily return, with knobs on in the case of the 2x short ETF.

It’s all down to the mathematics of compounding.

Short ETFs deviate in the real world, too

This is not a case of odd examples chosen to prove a point. Such behaviour from short ETFs happens very often in the real world, too.

A striking example cited by the FT a while ago involved a double leveraged short ETF based on the FTSE Xinhua China 25 index.

After the Beijing Olympics, this index fell 34% in four months. Yet rather than making a 68% gain, the short ETF delivered a 56% loss!

More mundanely, you may simply find that your long-term holding of a short ETF does go in the right direction, but for the reasons I’ve cited it turns out to not be enough to offset the declines you’re trying to guard against.

So much for protecting your portfolio.

Again, I stress that’s not to say these products are doing anything wrong – rather they are doing what they are meant to do, which is offering inverse correlation to the index on a daily basis, in this case to the FTSE 100.

But if you buy and hold them as longer-term portfolio protectors, then you are doing something wrong, though exactly what result you’ll get – good or ill – will depend on the lottery of volatility over the period.

Note too that there may be other reasons for deviations with short ETFs, involving costs, taxes, dividends, and also financing charges in the case of leveraged ETFs.

The compounding effect is the most important one though, and reason enough for everyone but day traders to avoid these ETFs entirely!

Next post: Weekend reading: Commodities are risky and typically unrewarding

Previous post: Why I’m looking at my portfolio more as the news gets worse