How a synthetic ETF works

The old investors’ advice to “Never invest in something you don’t understand” strikes a powerful chord in the wake of warnings about the risks of Exchange Traded Funds (ETFs).

Often tagged as exotic in comparison to their physical ETF brethren, synthetic (aka swap-based) ETFs use financial engineering to achieve the same ends, but in ways that pose specific risks that every passive investor should know about.

What is a synthetic ETF?

A synthetic ETF is designed to deliver the return of a selected index (e.g. the FTSE 100) just like any other tracker.

But it’s the way the synthetic ETF comes by that return that reveals its exotic nature.

The most obvious way to track an index is to own all (or most) of its component securities in the same proportion as that index. This way, the ETF should spout the index return minus costs and a few other inefficiencies. That’s how a physical ETF does it.

But a synthetic ETF doesn’t bother with any of that old pony.

Why go to the trouble of actually owning the shares of an index when you can deliver its return using a total return swap?

A total return swap is a financial derivative. In the case of a synthetic ETF, it’s a contract struck with a financial partner (known as a counterparty) to pay the ETF the precise return of its chosen index (both capital gains and dividends) in exchange for a stream of cash. 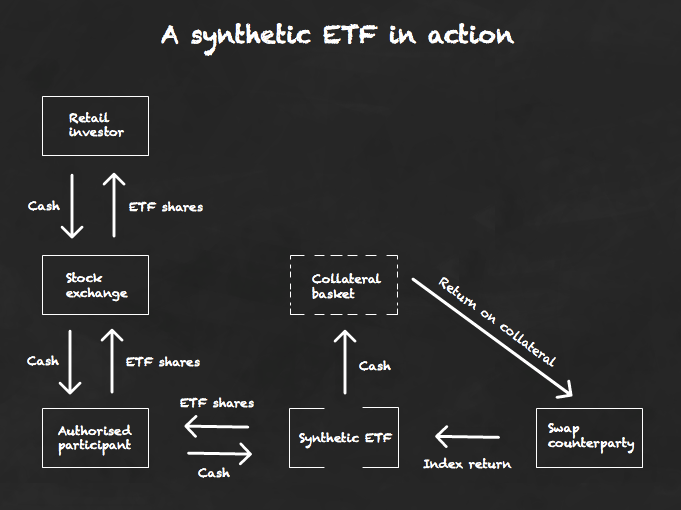 With a total return swap in place, the synthetic ETF can imitate an index without owning a single one of the benchmark’s securities.

Short-circuiting ownership means synthetics can overcome many of the tracking error issues that dog physically buying an index.

Synthetic ETFs are not tracking error-free, though. Performance is still leeched due to the fund’s TER, and other operational costs like the fee for the swap itself.

Synthetic ETFs are often used to forage in markets that would otherwise defy tracking because of:

Many small cap indices, for example, would require a physical ETF to own a massive constellation of equities that would be costly and time-consuming to trade, due to market illiquidity and yawning bid-offer spreads.

The effort involved would make physical replication too expensive, so synthetic ETFs step in like robots cleaning up a nuclear reactor. The explosion in synthetic ETF numbers over the last few years shows how successful they’ve been in opening up markets where physicals fear to tread. Few niches are off limits when you can just buy the return with a derivative.

A synthetic ETF’s reliance on derivatives may well send a little shudder down your spine. Derivatives haven’t had a good press ever since credit default swaps triggered the worst financial crisis since the Great Depression.

You’re absolutely right to be wary. All this financial engineering doesn’t come for free. The reduction in tracking error comes at the price of heightened counterparty risk.

Counterparty risk is the chance that the total return swap provider – even a seemingly indestructible entity like a giant investment bank – goes belly up. Lehman Brothers is the example of a counterparty crash par excellence.

If the worst happens, then the ETF’s source of return is cut-off and it’s time to fall back on the collateral.

So if the fund’s counterparty blows up, the collateral is sold off and investors (hopefully) get the value of their shares back.

Collateral can be held in cash, bonds and the equities of OECD countries. What’s more, European regulations limit counterparty exposure to no more than 10% of a fund’s Net Asset Value (NAV). In other words, the ETF must be backed by collateral worth at least 90% of its market value.

In practice, more collateral is often posted than required (known as over-collateralisation), and the ETF may be backed by up to 120% of its value in collateral.

The collateral quality counts as much as the quantity. There is no requirement for collateral to be held in the same securities that the ETF tracks. That means the ETF’s collateral basket can be stuffed full of all kinds of whiffy securities – Japanese small caps, unrated bonds – that could be hard to shift in an emergency.

The longer it takes to sell off the collateral, the more likely it is to plummet in value in comparison to the ETF. (And let’s face it, the chances are a counterparty will only fail during torrid market conditions.) If that happens then investors take a haircut.

i.e. They won’t receive the full market value of their ETF shares.

A number of ETF providers publish their collateral policy and the contents of each fund’s collateral basket on their website. I’d argue such knowledge is of limited use to retail investors, though.

Swap types to look out for

How ETF providers fund the total return swap has implications for the amount of collateral a synthetic ETF can call on in a crisis.

That last point is crucial. Because the collateral is pledged and not legally owned by the ETF, it can be frozen by a bankruptcy administrator stepping in to clean up the mess left by a failed counterparty.

In that scenario, the collateral isn’t released to the ETF provider as promised, but is caught up in the scramble to pick the best bits from the bank’s carcass. This happened during Lehman’s demise, and some investors (though not all) were left dangling for their cash.

Synthetic ETFs are not constructs to be feared like killer ASIMO ‘bots from the future. But they do have features to be wary of (as do all investments) and they are certainly more complicated than physical ETFs.

So in general, I prefer to use physical ETFs, when I have the choice.

Bear in mind, too, that when you look at the securities listed in the index section of a synthetic ETF’s webpage, you aren’t seeing what the ETF owns. This list only reflects the composition of the index that the ETF artificially tracks via the total return swap. What the ETF physically owns, if anything, is found in the collateral basket section of the webpage.

There are other synthetic tracker vehicles out there: Certificates, ETNs and some ETCs. They work differently again from synthetic ETFs, but we’ll leave them for another day.