I have decided to reverse my usual policy of looking at my portfolio about as often as Dracula out the window on a sunny day. Why? Because while we’re being roughed up I might as well discover a few home truths about my risk tolerance.

How big a beating can I take?

I don’t think I know.

Sure, I’ve done some tests. According to Finametrica’s industry-standard metrics, I’m quite the risk jockey – in the top 2% when it comes to laughing in the face of volatility.

But, but, but… the only test that counts is real life.

How do I feel when the numbers are actually streaming red down the screen? As they are right now – we touched bear market territory last week. A true test of nerve as the FTSE veered 20% below last April’s highs.

But I had a lot less to lose in those days. I got a statement at the end of the year and everything looked shot to hell, but it didn’t seem to matter much.

I was more worried about my job. Retirement was a faraway land – a 30-year pipe dream, minimum.

But now I could lose an arm and a leg.

It’s a test designed to provoke an emotional response 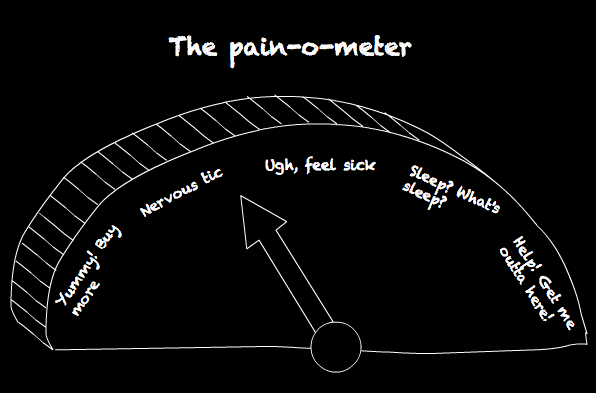 So I’m staring my numbers straight in the face.

Somehow, when I wasn’t really looking, my portfolio crossed a threshold. It grew up.

Now a day or two’s volatility can wipe off thousands from my name. Look again and the thousands are back. (Some of them, anyway.)

Wipe on, wipe off.

If that sort of money disappeared from my bank account I’d phone the Police.

If I won it back on a gameshow I’d be dancing like Topol.

But when money is dangled and whipped away faster than a card sharp playing Follow The Lady, it doesn’t seem to matter. It isn’t real, even though it is.

My emotions are caged. My pulse low. No sweat prickles my brow.

Is the risk tolerance test accurate? How much rougher does the sea have to get before I feel out of my depth?

That’s why I keep looking at my numbers. It’s a staring contest between me and the market.

I want to know how much wealth I can watch evaporate and not blink.

When I hit my limit, I want my withdrawal to safer ground to be orderly and gradual. Otherwise, I could risk years of gains.

Some clues that you’re nearing the limit:

That last one is the best friend you’ve got, because who wants to live with the first two?

If it’s too scary to rebalance into the losers now then how would you feel if losses ramped up to -30%, -40% and beyond?

Dialing back your equity allocation and upping government bonds will reduce your exposure – but do it gradually in the coming months and years.

Not in a panic when equities are on sale.

To give you a sense of what carnage looks like, the biggest real terms stock market drop in UK history was -71% between 1973 and 1974.

It took the market ten years to return to its previous level. If you were accumulating equities on the cheap in the meantime then your portfolio recovered much earlier.

But if you were selling off then it took much longer. Possibly never.

For me, education is the best armour. Knowing that crashes are normal makes it easier to shrug off bad times.

The Irrelevant Investor has posted some brilliant stats about double digit declines in the US. We don’t have those figures for the UK but they’re likely to be in the same ball park.

There’s an even starker chart from Larry Swedroe that shows how often the US goes into the red even when the year ends in the black.

(Spoiler – all the freaking time.)

So we’re down a fair chunk. This is normal. Equities across the globe are now cheaper and that raises the prospects for future expected returns. If you’re still accumulating then this is good news.

The rewards of investing come to those who can take the pain when the world mood darkens. Many people can’t. That’s why they fold and sell out at lower and lower prices.

Do that and the spoils go to the winners who scoop up those unwanted assets and sell only much later when the fearful have returned, confidence restored, and confidently buying back those self same assets from you at much higher prices.

So hang in there and use the pain.

Next post: Why a short ETF won’t protect your portfolio in a bear market