Important: This article is not a recommendation to buy or sell shares in Aberforth Smaller Companies Trust. I am a private investor, storing and sharing my notes. Please read my disclaimer.

Many active stock pickers spend their days trawling in the lower reaches of the index, searching for small cap bargains to boost their returns.

As we’ve written many times on Monevator, most of these would-be Mini Buffetts will fail to beat the index. Stock picking is immensely hard (although that doesn’t stop me trying it). Most readers will be better off with index funds.

However UK investors looking to hang up their small cap Geiger counters face a stiffer challenge than mere self-awareness.

Whereas lucky US investors can choose from small cap index funds and value-based ETFs galore, here in Britain it’s like shopping for bread in Soviet Moscow during a farmer’s strike. Blindfolded.

Recent developments haven’t really helped matters. My co-blogger The Accumulator rejected Credit Suisse’s CUKS ETF as an expensive-ish mid cap tracker disguised as a small company affair, and the RBS Hoare Govett Smaller Company tracker got the thumbs down for being a synthetic exchange traded note (ETN) that suffers from a lack of transparency.

So whether you’re a small cap sniffer-outer tired of the game or a passive investor looking to bolt-on value via the little companies, what are you to do?

I’ve several times suggested that readers, friends – and The Accumulator for that matter – do some research into the Aberforth Smaller Companies Trust (ASCoT), to see if it can plug this gap in their portfolios.

As Aberforth reported its full-year results to December 31 this week, I thought I’d offer a quick summary here, too.

Now let me be very clear – this is no index fund. It’s a managed investment trust, and while the TER of 0.85% isn’t too bad compared to the worst of those beasts, this is no low cost vehicle scooping off market returns like an elegant crane dipping its beak into an unruffled lake to skim a sliver of water.

But it’s no hippo executing a belly flop, either.

Investing in smaller companies is always more expensive than buying liquid large caps, so you’d expect the TER to be larger than, say, the blue chip buying income investment trusts.

A TER of 0.85% is much less too than what the average small stock picker pays in dealing fees and spreads to execute their own trades – though buying either the trust or the companies it buys on your behalf will cost you the same initial 0.5% in stamp duty.

That TER doesn’t include the cost of interest. ASCoT’s portfolio was on average geared to the tune of 10% throughout 2011, and it’s currently running at 13%.1.

It also doesn’t include the underlying transaction costs paid by the fund manager in turning over the portfolio as it dives in and out of positions.

While the manager talks a good long-term game, the trust turned over 29% of its portfolio in 2011, so these costs will not be inconsequential.

They will ultimately be paid from out of your returns, either by reducing the underlying NAV, or through shareholders being paid a lower annual dividend yield if the costs are met out of income.

Costs are a drag on a trust’s performance, which means managers need to offset them through some winning picks if they’re not to fall behind their benchmark.

Encouragingly (unless you’re a conspiracy theorist) the trust’s chairman Paul Marsh is one of the two professors who spend much of their working days monitoring this index. He should certainly know his small caps, as well as his benchmark!

Indeed, Marsh and his colleague Elroy Dimson spend a lot of time delving into past returns from Britain’s little companies. They tracked returns from the HGSC index back to 1955 and found that:

That smashed the returns from the wider FTSE All-Share by 3.4% a year; playing safe and investing £1,000 then reinvesting dividends into the All-Share instead would have delivered just £620,000.

Nice returns if you can get them, although past performance isn’t a guarantee of future returns. And given the paucity of small trackers in the UK, unless you fancy that synthetic ETN mentioned I cited earlier there’s no way to easily capture them anyway.

In some ways then, we’re not even asking for ASCoT to beat the index in return for gobbling up some of our return as fees, like you’d normally demand (/hope!) for from a managed fund. Just matching the HGSC index would be nice.

So how’s it done?

On a total return2 basis:

For my money, Aberforth has made a pretty good fist of at least tracking the index over the long-term.

In recent years though it’s clearly struggled, which is reflected in growing investor disenchantment with the trust. 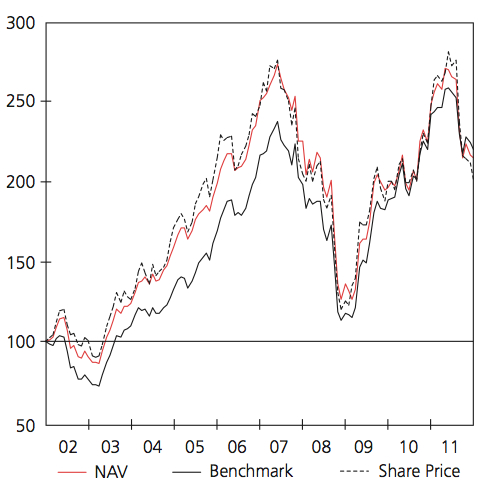 Absolute performance relative to HGSC Index; rebased to 100 at 31 December 2001

The discount to NAV has widened to nearly 17%, and on a share price return basis, that’s meant an investment made at the start of 2011 had fallen even more than NAV in cash terms by year-end – you’d have been down some 18.5% on your initial stake.

Value shares out of favour

The managers claim their recent run of under-performance is due to the trust’s value investing style.

Over the long-term, they say, analysis by Paul Marsh’s London Business School points to value shares in the HGSC beating its growth shares by a thumping 5% per year since 1955.

Sometimes value stops working, however – one reason why people find it hard to stick with for the long-term.

During the dotcom boom, ASCoT did poorly as investors bought companies that weren’t even making profits, but then rebounded when those companies failed, for example. The managers claim that for whatever reason, the past five years have been similar, with their research showing HGSC growth shares have beaten value shares by 10% per annum.

Clearly that’s a big headwind to performance. But if you believe in mean reversion in markets then the trust should turnaround when the wind changes.

We won’t run through all 89 companies that Aberforth Smaller Companies had invested in at the last count, but I will state I like its style.

The trust is currently particularly weighted towards the smallest small companies, where I agree valuations look most compelling.

What’s more these shares don’t look particularly imperiled. Some 43% of the companies ASCoT has bought have net cash, meaning that at the very least they’re unlikely to go bust any time soon.

You may think it’s bizarre that lowly-rated cash-rich companies are among the cheapest you can buy currently, given all the dire headlines about the economy.

The managers agree, stating in their annual report:

…during the bear market of the second half of the year, the correlation between balance sheet strength and share price performance within the benchmark was remarkably low – the relationship between the two was effectively random. This frustrating lack of discernment can probably be attributed to the prevailing climate of extreme risk aversion, which has, so far, out-weighed other considerations.

I concur, having seen various small cap shares pummeled in late 2011, and liquidity so constrained that I’ve had to buy or sell some investments in blocks of £1,000 or less to avoid moving the price. Bearishness still reigns in this stock market.

ASCoT’s holdings also look cheap on other measures. As of December 31st:

The trust was yielding 4% in December (thanks to the amplifying affect of the discount), and it’s still yielding 3.6% after a strong run in the share price in January.

Equally, the discount remains elevated at 15.3%.

The managers believe that the trust’s fortunes will reverse in time (and I agree) stating:

The present gulf between the valuations of value and growth stocks is exaggerated. History suggests that the relationship between the two groups will not stay at such stretched levels. The process of normalisation will be advantageous to the value investment style.

Investors who are prepared to wait can enjoy a decent dividend income, which in recent years has grown much faster than inflation: 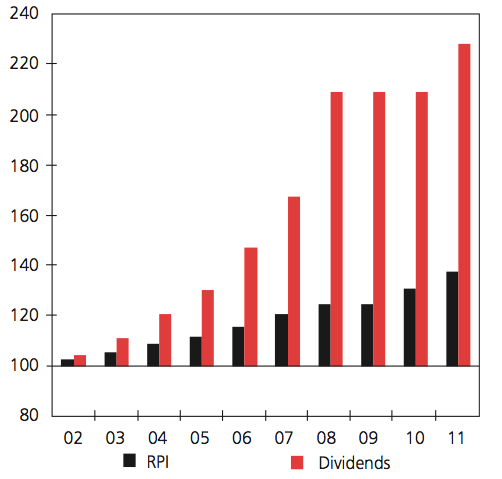 Dividends versus RPI growth; Figures rebased to 100 at 31 December 2001

I’ve almost always held Aberforth Smaller Companies Trust shares in the past 4-5 years, although residing in my active portfolio the position is liable to be trimmed and expanded as I see fit.

My current holding is the largest I’ve ever had, representing around 5% of my total net worth.

As with Caledonia Investments, I like the underlying companies, and the long-term record and approach of the managers. I think they’ll do well eventually. Both trusts are on large discounts, and I think in time they’ll close, which will amplify returns.

Passive investors looking for a straight proxy for the HGSC index shouldn’t be interested in such speculation, of course, and will rightly be wary of investing in ASCoT given its relatively high costs.

But I think one shouldn’t let perfect be the enemy of the good.

In the absence of a cheap small cap value tracker, I think a small deviation from the righteous passive way to invest say 5% of your portfolio in this small cap trust is likely to prove more rewarding than skipping past the small cap segment of the market altogether.

Note: As with all our specific share write-ups, I can take no responsibility for the accuracy of this post. Please do your own research on Aberforth Smaller Companies Trust and read my disclaimer.

Next post: Weekend reading: The frugal mum who paid cash for her first house

Previous post: The family BlackRock and the mysterious case of the elusive TERs