Buying small caps to gear up for the recovery

A couple of days ago I bought shares in the Blackrock Smaller Companies Investment Trust (BRSC).

Together with my positions in two other similar trusts – Aberforth Smaller Companies and The Rights and Issues Investment Trust – plus a handful of individual small cap holdings, I’ve now got around 15% of my net wealth in mini companies.

Partly I think (or thought) that these trusts were beaten down too much in the bear market; I’ve already written about the Rights and Issues Trust, and my investment in Aberforth is showing a profit, too, although my first buy was too early.

But my putting money into the Blackrock Smaller Companies Trust is prompted by a slightly different motivation.

I’m increasingly minded to think the worst of the economic slump is behind us.

As recently as February I felt isolated in looking on the economic bright side; given what happened in March, perhaps that was deserved!

But latterly optimism has spread as fast as bearishness did in 2008, leading to a big run up in share prices.

This optimism is the motivation for investing in small caps.

Historically, over the long-term small cap value shares outperform larger companies – it’s one of the very few edges a private investor can be fairly confident of securing versus investing in a broad market tracker.

In my discussion about small cap growth shares, I warned that such investments were likely to bounce up and down with more vigour than an adult actress in her valedictory performance.

Interestingly, the same thing is true of investment trusts that put money into small caps, even though the risks of an individual company blowing up have been greatly diminished through diversification.

Conversely, when the market rallies, not only do the small cap trust’s holdings go further in the recovery, but discounts narrow too, further boosting gains.

Here’s a graph of how Blackrock Smaller Companies has done over the past decade that shows (to an extent) what I mean: 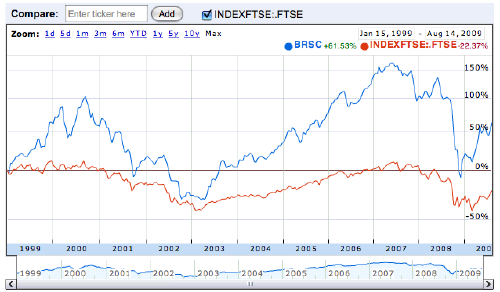 As you can hopefully see, the decline from peak to trough is more extreme for the investment trust than for the market.

It twice falls more than 100%, compared to 50% falls for the FTSE 100 index. But the gains have been better, too, compensating for the sleepless nights.

You can also see how relative valuations seem to compress and expand. (If anybody has empirical data for this, please do share it in the comments below.)

This is a hunch, not a fact

I should stress that my theory that these small cap investment trusts are going to beat the wider market is not gospel truth.

The following things are true, though:

Note that it’s small cap value shares that academics have found will outperform, not just small companies in general. Putting money into a fund looking for blue sky minnows won’t do it.

All of my three trusts claim a value tilt in their selections, and from looking at their top 10 holdings this seems generally credible.

Still, I’ve split my money between three trusts to try to get away from the risk of one manager picking particularly badly (at the cost of missing out on one doing well).

I’ve not used a small cap ETF to get exposure because currently there isn’t one for the UK. I also get the potential benefit of the discount narrowing with this investment trust strategy.

Why not invest only in small caps?

You could, of course, put all your money into small company trusts.

The Rights and Issues Trust increased its first investors’ money some 25-fold in 20 years to the 2007 peak, for instance, though it’s well down since then. It did much better than the main market.

While that was a statistically unlikely good run, I do think small caps will continue to outperform over time, if bought at today’s prices.

However there’s always a chance that large caps could reverse the pattern over the next few years – reversion to the mean is one of the strongest trends in the markets. Small caps have already had a pretty good run coming off the bear market lows, as the graph above shows.

Large caps can easily be invested in via cheap trackers, too, and they tend to pay good dividends.

Finally, my money is already allocated as someone who invests through bear markets. Chopping and changing is expensive!

Perhaps I should be even more aggressive with my small cap tilt, but I want to sleep at night.

Who knows, maybe this rally is almost done, and all I’ve bought myself is some extra downside with these small cap investment trusts? You can only invest with a long-term horizon, however, so I’ve tucked the trusts into my ISA and we’ll see if they were a good choice in the years to come.