The family BlackRock and the mysterious case of the elusive TERs

If you find the range of index funds aimed at UK investors about as appealing as snacks on a train’s buffet trolley, then take a look at the BlackRock family of trackers known as the BlackRock Collective Investment Funds (CIF).

Nestling within this series of index-hugging Unit Trusts is:

The best picks from this Blackrock range offer a useful alternative to the tasty TER troika of Vanguard, HSBC, and L&G. They also offer the prospect of fee-dodging salvation for some Hargreaves Lansdown investors.

Until their adoption by the major fund platforms, coherent information on the BlackRock CIF index funds was shrouded in financial fog.

And there are still plenty of wisps obscuring the view even now.

Glimpses of ludicrously cheap TERs on MorningStar dissolve into the ether on the discount broker sites, while BlackRock’s homepage reveals nary a trace of these fabled funds… Just what exactly is going on? 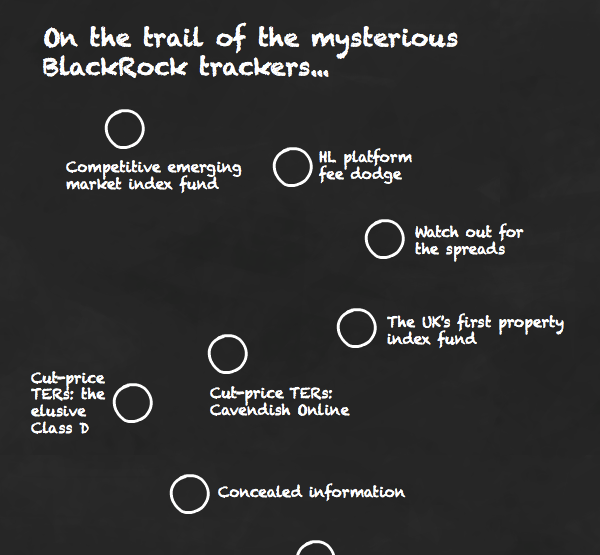 Here’s the full rundown of index funds available from the BlackRock CIF range:

Note: Stated TERs for the Class A funds can vary by platform.

The funds appear in two guises: Class A and D.

Obviously – given the lower TERs – Class D is the good stuff, but sadly it’s reserved for institutional investors. i.e. Pension fund type financial behemoths. However, it’s possible to join in the party, if you know where to look. More below.

Financial fleas like you and me are normally offered Class A. As ever in the world of finance, the less you can afford something, the more you have to pay for it.

Other points of intrigue:

Yes, sorry. Where this does really get interesting (and you have to take your thrills where you can in this game) is:

Discount brokers Cavendish Online will rebate 100% of their trail commission on all BlackRock funds!

I’ve not seen any platform rebate trail commission on index funds before, and it means you can knock 0.2% off the TER of every Class A BlackRock fund you buy through Cavendish.

If you react to trading fees like Dracula to sunlight, then the rebate makes the Class A emerging market fund and the corporate bond funds well worth a second look.

The other funds are either unavailable through Cavendish, or else can all be beaten by Britain’s cheapest tracker alternatives – at least for now.

It’s also worth checking if your preferred platform is refunding any BlackRock commission along the Cavendish model.

Its published TER of 0.6% trounces its nearest competitor – the 0.99% of the L&G Global Emerging Markets Index Fund – even when you take into account the spread.

It can even beat the Vanguard Emerging Markets Stock Index Fund, if you buy through Cavendish Online and pay an effective TER of 0.4%.

Research is crucial with this fund, however. Its benchmark is the FTSE All World Emerging index (same as the L&G fund) but BlackRock’s interim report shows that the fund has a 20% allocation to North America.

As it turns out, the North American allocation is chock full of emerging market companies that are listed in the US.

Performance-wise it’s not wildly out of sync with its L&G equivalent, but you need to be comfortable with what you’re getting into.

The BlackRock Global Property Securities Equity Tracker is the only property index fund available in the UK.

It invests in developed world commercial property, with a massive bias towards the US.

The TER of 0.61% plus spread compares well with the equivalent iShares ETF – IWDP – (on which you’ll incur trading fees) although HSBC have recently launched a global property ETF – HPRD – with a TER of 0.4%.

Cavendish doesn’t list the property tracker online (a fair few brokers seem to skip this one) but it’s worth a phone call. The fund is new enough that websites may well still be playing catch up with the latest developments.

Class D – out there somewhere?

The holy grail when it comes to BlackRock index funds would be to somehow masquerade as a pension fund and access those juicy Class D TERs.

Many platforms do list the Class D funds but the £250,000 minimum investment is a hurdle I personally find hard to clear.

However, as reader Gadgetmind reveals in the comments below, most Class D BlackRock funds can be bought by mere mortals, if you’re prepared to use the Skandia fund supermarket.

Skandia normally requires investors to use an IFA go-between, but a few discount brokers such as Clubfinance enable you to  go it alone.

Clubfinance take trail commission from BlackRock but so does every other platform, so don’t worry about that.

Using the Skandia/discount broker combo, the Class D TERs become super-competitive, but only if your portfolio and contributions are large enough to reduce the annual charge and bid-offer spreads to atoms.

Even then the differences are marginal in comparison to the equivalent HSBC and Vanguard funds. Again, it’s the property and emerging market funds where the gain is most impressive.

BlackRock jealously guards its CIF Investment Fund secrets on its intermediaries’ site. Admit to being an enthusiastic amateur and you’ll never find what ye seek:

One day the financial services industry will work out how to make things easy for UK investors and empower more people to take charge of their finances. In the meantime, I’m hanging up my deerstalker for another week but hopefully I’ve clued you in to some useful index tracker ideas.

Next post: The case for Aberforth Smaller Companies Trust