Income units versus accumulation units – what difference does it make?

The difference between the two is simple, subtle and useful, but it can be as confusing as identical twins who part their hair on opposite sides.

The difference between income and accumulation units boils down to this:

A welcome morale boost it is, too. If you’re in the withdrawal phase of your investment life (that is, you’re a spender!) then these income units are for you.

Accumulation units are dull, boring and not nearly so nice as finding a little cash in your trading account every so often. All the same, they gift you discipline without effort, and that can prove hugely uplifting in the long-term, since reinvested dividends are a major factor in total returns. 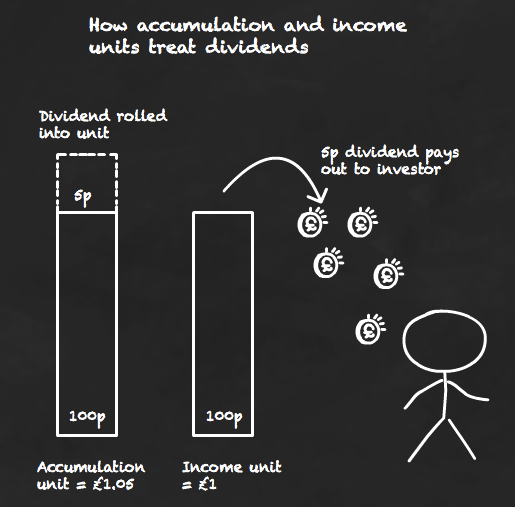 Accumulation units defeat the enemy within

You can reinvest dividends paid out from income units, too, but you’re always prey to the temptation to divert them into some shorter-term cause, like having fun right now.

The advantage of accumulation units is that the devil-in-you has no chance to make mischief. The income is rolled up into the runaway snowball of future wealth, and you’ll barely even miss it.

In contrast, reinvest yourself and – aside from the potential self-sabotage already mentioned – you may lose a slice of your income to trading costs:

Accumulation units side-step all that.

True, it won’t make any difference if you’re a smart passive investor who buys funds that don’t incur those kind of fees.

For example, the index funds used in Monevator’s Slow and Steady passive portfolio shouldn’t attract any upfront trading charges, and so you don’t save by using the accumulation version.

Automatically reinvesting dividends in some funds may be cheaper though, and ‘capitalising’ ETFs will also benefit from lower costs. (‘Capitalising’ is ETF-speak for accumulation units. ETFs that pay out dividends are usually termed ‘distributing’.)

By the way, if like the great Wall Street financier John D. Rockefeller you only get a thrill from seeing your dividends rolling in, you needn’t entirely miss out with accumulation funds.

You are still due the same dividends that the equivalent income unit holder enjoys. By hunting about with some online tools you can see what dividends you did actually earn – before they were rolled up into your accumulation units.

The same but different

When I try to explain accumulation units to friends (I seem to have less of those than I used to!), they often go cross-eyed the moment the price differential comes up:

The retained dividends have purchased more shares for the accumulation class of the fund and thus increased the value of every unit held. Yet when you buy into a fund, you’ll get the same bang for your buck from accumulation units as from income units.

If you had spent £2 on two income units instead of one accumulation unit, your cash return would have been identical at 20p. The only real performance difference is that accumulation units will without doubt be compounding your dividends as and when they’re earned, retained, and reinvested, whereas income units leave it all up to you.

Finally, please note that contrary to popular opinion, holding accumulation units instead of income units does not enable you to sidestep income tax.

The taxman doesn’t care that the dividends you earned were automatically rolled up – the dividend income earned by your accumulation units is liable for tax, and the taxman is due his cut.

Shelter your investments in the tax-repelling shield of an ISA or pension to avoid paying income tax on your dividends, whether from accumulation units or income units.

This will protect the tax scythe from cutting down your long-term returns.