Why investors should be wary of discounted funds

The big beast of British investment platforms, Hargreaves Lansdown, has revealed the special discount rates it has secured on index funds.

On the face of it, Hargreaves now hosts the cheapest trackers on the market. From UK equity to emerging markets you could easily put together a diversified portfolio using its range. A range that consists of reputable BlackRock and L&G index funds especially discounted, thanks to Hargreaves’ powers of persuasion and market dominance.

Sadly, while the funds are super competitively priced, Hargreaves’ charges for using their platform are not the best.

The reality is you can buy a much cheaper portfolio using standard-priced index funds from a broker that’s happy to keep a smaller slice of the pie for itself. 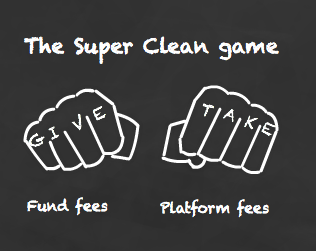 The table below shows the full cost picture once you add in platform fees.

Every Hargreaves Lansdown fund pick is more expensive overall in comparison to rival Charles Stanley Direct when you add the two fees together:

Note: Dealing costs are zero. The above table shows a representative sample of the full HL range.

You’d pay 34% more overall for the privilege of holding a portfolio of Hargreaves Lansdown’s “super low cost” trackers in comparison to their equivalents at Charles Stanley, using the following assumptions:

The weighted total cost of the portfolios is 0.59% at Hargreaves Lansdown and 0.44% at Charles Stanley.

Imagine your £50,000 portfolio made a return of 3% that year or £1,500. Hargreaves’ charges would snaffle 20% of that return. Charles Stanley would chomp 15% while Interactive Investor would take less than 7%.

That’s a big difference and it exemplifies why inertia and headline claims of “super low cost” deals are the investor’s enemy if left unchallenged.

Of course if we saw, say, a 20% year, then the percentage of returns eaten up by all these charges would be a lot lower. But you can count on returns closer to the 3% end of the spectrum than the 20% end over the long term.

Fidelity is the other big player who is sounding the horn for its exclusive low cost trackers. Again, the manager’s special is a dish best served to someone else:

As with Hargreaves Lansdown, Fidelity is second class in every category. It even takes a beating from the institutional version of its own World index fund that’s available from Charles Stanley.

That’s only £6 difference on a £10,000 portfolio but as your wealth heads north of £16,000 then you’re increasingly better off with a fixed fee broker.

Don’t think you’re getting anything special with exclusives funds – sometimes described as Super Clean by an industry that believes you can shift anything as long as you market it correctly.

Super Clean funds are just low-price share classes of regular funds. In other words, they are exactly the same thing except for the discount.

If the discounted fund’s Ongoing Charge Figure (OCF) plus the platform fee amounts to more than you’d pay for much the same thing elsewhere then who wins? Not the investor that’s for sure.

(Ignore any references to Annual Management Charges (AMC) or any other fund fee formulation that isn’t labelled the OCF or Total Expense Ratio (TER) or “total cost of investing”. AMCs are just another little trick designed to wrong-foot unwary investors and to underplay the true costs of a fund).

What’s more, an ‘exclusive’ fund that’s not stocked by other platforms may cause problems if you decide to switch later on.

You may have to sell your exclusive into cash to facilitate the transfer and buy into a new fund that is more commonly available. That’s time out of the market that could cost you more money and may put you off a switch that would otherwise work in your favour.

So don’t be lured in by special offers designed to make you feel better about paying more for the same thing.

Big brands will always try to leverage their cachet but as savvy DIY investors we should seek out their hungrier, more competitive rivals who are prepared to do us the best deal.