Weekend reading: Screw it, let’s not do it

The national disaster that is Brexit keeps delivering. This week’s barrel-scraper was outrage at a High Court ruling that Parliament must be allowed a vote before the UK can start to leave the EU.

Remember: The high-minded veneer grafted onto the murky motivation for Brexit was we must ‘take back control’ from Europe and follow our own laws.

Yet when a British court says what the British law is, the judges are called “enemies of the people” by the Daily Mail. 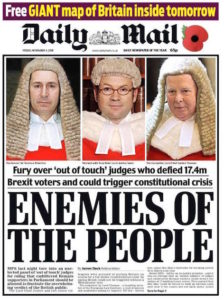 The Mail has been on the wrong side of history for 100 years, so no great surprise there.1

But the rest of the right-wing press also panted with fury at British law being ruled upon by British judges.

And this being Brexit, there was further nastiness.

The MailOnline was outraged at the ruling from an “openly gay” judge in repeated references it has since removed (after a backlash).

Meanwhile The Sun highlighted how some of those who brought the case to court were foreign-born.

Not that Brexit has anything to do with intolerance and xenophobia, you understand.

Let’s get elitist on their ass

I’ve had enough of this nonsense, and of arguing with Leave voters. Nine out of ten of the vocal ones online are angry and incoherent. Their vitriolic response to the High Court ruling puts me in a counter-revolutionary mood.

Can we not call the whole thing off, and leave these people to go back to shouting at cyclists?

We’re often told Brexit was a kick out against the globe-trotting London elite who run the country for their benefit.

If that’s true, then isn’t it time we pressed the Elite Mode cheat button?

Of course some Leave voters will be upset if we cancel Brexit:

I had a dream

Sadly, I think we will almost certainly enact some sort of Brexit. A few politicians will make principled resignations, but most blow with the wind. Populism is in the air, and even many Remain voters who were as dismayed as me about the referendum result would be aghast at it being blatantly disregarded.

Well, respect. I guess that’s the price you pay for being more reasonable than your opponents.

Just maybe though, the High Court decision could be the start of throwing enough grit into the wheels that we can trundle towards a softly softly Brexit, as opposed to the hard exit the government seems hellbent on accelerating into.

The markets appear slightly more optimistic. UK-focused shares such as banks and housebuilders soared after the High Court ruling, as rumours of their demise suddenly seemed premature. The pound rallied a tad too. There are even calls for an early General Election. (One it’s unlikely an anti-Brexit coalition would win, unfortunately, especially with Labour in such a shambles.)

I was totally wrong about the immediate impact of Brexit on the economy. Uncertainty is almost always bad news, but so far that hasn’t held (perhaps because we were doing even better than I thought before the vote, despite, you know, being “shackled” to Europe… And of course there has been the short-term boost from the Brexit-weakened pound).

But I’ve not changed my medium to long-term view that any hard Brexit would be a bad outcome for most.2 As for the social downsides, they’re escalating.

The Brexit train has left the station, but we don’t have to drive it off a cliff.

Were I to allow them the opportunity (I’m pretty busy this weekend, so won’t) I’d get plenty of vitriol from certain Leave voters for this post.

This despite Monevator being a personal blog, and my commentary being far milder than the rhetoric I’ve cited from national newspapers selling millions and claiming objectivity.

Of course, I’d expect a rebuttal to any suggestion we might simply note and move on from the Referendum result. That would be fair enough. It’s the frothing and foaming that isn’t.

Dominic Grieve, the Conservative former attorney general, said reading hostile coverage in the Mail and the Daily Telegraph “started to make one think that one was living in Robert Mugabe’s Zimbabwe … I think there’s a danger of a sort of mob psyche developing – and mature democracies should take sensible steps to avoid that”.

Labour also raised concerns about the absence of a ministerial response to the media coverage.

Lord Falconer, who was lord chancellor under Labour between 2003 and 2007, said faith in the “independence and quality” of the judiciary was being undermined “by this Brexit-inspired media vitriol” in an article written for the Guardian.

Those who are quick to laud the will of ‘the people’ and wave the populist flag should at least be acquainted with the Reign of Terror, Gaius Marius and the fall of the Roman Republic, Yellow Journalism, and, well, the obvious.

And who knows, maybe the next President of the United States.

I’m turning off comments this weekend. Have a great weekend. 🙂

Making good use of the things that we find.

Product of the week: The Guardian reckons Tesco’s current account is a no-brainer now Santander has halved the rate on its 123 account. Tesco pays 3% on balances up to £3,000, you can open two accounts per person, and there is no need to set up direct debits in or out.

Some links are Google search results – in PC/desktop view these enable you to click through to read the piece without being a paid subscriber of that site.3

Note: The Telegraph has now put much of its content behind a premium paywall, and the Google search trick doesn’t get around it. So far fewer Telegraph links for the foreseeable, unfortunately.

Book of the week: To celebrate a decade blogging, US investment manager and thinker Meb Faber has made all his e-books free for a week. I was pleased to see the gesture has jumped across the channel to the UK, and by my reckoning you’ve still got a couple of days to get download them from Amazon. (Note: Obviously it’s only the Kindle versions that are free. Check the price before ordering!)