Weekend reading: Bonds have taught us a lesson in 2014

Once about as exciting as an ice bucket challenge for a polar bear, in recent years bonds have provoked some fierce debate.

In fact, for years it’s been a near-consensus opinion that bonds have been in a bubble.

Yet it’s a bubble that’s staunchly refused to burst.

The uncertainty has even grabbed the attention of sleepy passive investors, who have caught the whiff of the fear about bonds and wondered if they should really hold them in their supposedly speculation-proof portfolios.

We’ve tried to do our bit to steady the nerves, pointing out that bonds are in your portfolio for stability, not the expectation of great returns.

And also that passive investing works because you let the maths do the work, not speculation.

For my part as a legendary speculator in my own spare bedroom, I’ll admit I’ve thought bonds over-priced for ages – and far too early.

But having been humbled many times by the markets, I’ve urged the more vehement posters in the comments of this website to curb their expressions of certainty.

Any time we typed the word ‘bonds’ in 2013 – even in a simple ETF portfolio update – it felt like everyone and their dog stopped by to tell us that bonds were set to crash in 2014, and if you must hold fixed interest, hold cash.

Oh Mr. Market, how you love to put egg on the faces of the overconfident.

Bonds, bonds, everywhere, and barely any income to drink

Of course the year is not done, and even a year is a small time period over which to judge an asset class.

Yet government bonds – and the co-incident swelling of public debt around the world – have been defying investors for years, as Elaine Moore explains in her summary of the situation for the FT this week (note: link is a search result):

…bond markets have flourished, forcing investors to reconsider the level of risk they are willing to take in credit markets to find respectable yields. Debt sold by European countries that once faced a forced exit from the Eurozone has attracted levels of interest that would have seemed incredible two or three years ago. […]

The switch into riskier bonds isn’t confined to Europe, either. Flows of money into emerging markets have also swung up, with the “taper tantrum” swiftly forgotten.

Countries such as Ecuador, Ivory Coast and Pakistan have returned to markets – after years of civil war, political turbulence or debt defaults – to find investors more than willing to lend at rates of just 6 or 7 per cent. Those are the sorts of yields that prime borrowers such as the UK or US had to pay before the financial crisis.

Now, I don’t think the demand for bonds this year is a reason not to be cautious about the asset class.

You can’t escape the mathematics of bond returns, and with yields already so low there’s really no way we could have very strong nominal returns for many future years. (Well, unless we saw deflation. Even a 1% return from a bond might be attractive if inflation was negative by 2%, for example.)

And personally, as a reckless and ill-advised active investor, I’m holding cash and selected obscure fixed income securities like preference shares to diversify my largely equity-focused portfolio for now.

But if I was a pure passive investor, I’d still have the chunk of my money in UK government bonds that’s suggested for my risk profile, perhaps split between bonds and cash.

Meanwhile if I was an investing enthusiast prone to sharing my certain opinions on investing websites and bulletin boards, I’d try to have just a little more humility when it comes to bonds.

This is for two reasons.

Firstly, it’s clear something has to give someday with bonds. But just like with stock market corrections, as 2014 has proven in spades the timing is at least difficult, and likely impossible.

The reality is that rates can slowly rise, bond prices can go down, and you can still end up with a positive total return – because you’re getting income, and you’re reinvesting it at progressively higher yields.

As a Vanguard white paper quoted on FE Trustnet put it earlier this month:

“A simple duration analysis can give a rough estimate of the price return, but this ignores the income that an investor earns over time,” said Vanguard.

“As the graph [below] shows, despite realising a -10.4 per cent price return over the next 10 years, the investor’s cumulative total return is actually positive at 31.4 %.”

“On an annualised basis, this is 2.8 per cent per year, roughly equal to the current yield on the 10-year gilt, which emphasises that the starting yield is key in forming forward-looking return expectations in fixed income.”

Here’s the graph (sorry about the size, it came that way): 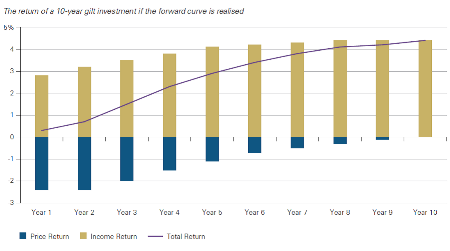 Rates higher (as being predicted by the market at the time of the White Paper) would have resulted in an okay long-term return, as a decade of increasing income made up for the capital losses.

Cut out and keep that graph if you want to understand bonds.

Have a great bank holiday weekend!

Product of the week: Yorkshire Building Society has launched a one-year cash ISA paying 2%, which is easily enough to put it at the top of the Best Buys table says ThisIsMoney. Better yet, it allows transfers in!

Book of the week: Attention die-hard passive investors: A new edition of The Bogleheads’ Guide to Investing

has just been released. I haven’t read it yet but I presume there’s a strong US emphasis, as per the forum that’s behind the book. Still sure to be plenty of wisdom in there though.

Next post: Vanguard’s cheap trackers and ETFs just got even cheaper