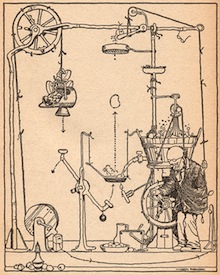 Unlike most value investors, I don’t say three Hail Marys and reach for the smelling salts when I come across an attractive-looking growth stock.

I’m a pretty mongrel active investor, and will consider almost anything if the price looks right.

Besides, I admire growth companies.

These are the dynamic outfits that are inventing the future. And regular readers will know I believe that the future is getting brighter every year (the woeful exception of the environment and my worries about inequality aside).

Solar power, 3D printing, wearable technology, genome therapy, cars made from graphene – bring it all on!

But as a rule I won’t be investing in it.

I applaud those few investors who through skill or luck beat the market over several decades by identifying the best growth prospects.

It must be amazing when a share you own climbs 100-fold over 25 years, as happened with those who backed Amazon after its IPO, for example.

That’s not going to happen when you invest in a popular defensive company like Unilever or GlaxoSmithKline, whatever other virtues it might posses.

The snag with growth investing is that the Amazons of the world are rare.

Even when you do identify a successful company, there’s a big difference between noticing it’s making brilliant products that could change the world, and investing in it for market-beating returns.

Indeed most stock pickers who focus on growth1 do much worse than value investors when it comes to beating the market.

They would be better off in passive index funds, like the vast majority of people.

If they must be active investors, then it’s value, quality, and small size that have a track record of delivering alpha.

The academic research suggests a basket of growth shares will underperform.

Incidentally momentum – the tendency for winning shares to keep winning – is the other premium that has been shown to beat the market, and often it’s associated with growth stocks.

But over time momentum shifts from one sector to another.

And when a growth sector falls out of favour, it falls hard!

At least technology investors get to read about science-fiction gadgets while they’re busy losing to the market.

Actually that’s a real reason why growth investors tend to do worse than value investors.

It feels great to own shares in a sexy electric car manufacturer, a biotech startup that could cure cancer, or a social media site that all your friends use.

A cluttered Facebook feed is still annoying if you’re a shareholder, but at least it’s making you money…

All the latter have been profitable trades for me over the years, but these value shares not what anyone wants to hear about at those mythical cocktail parties.

Because it feels great to own growth shares, people will pay too much to do so, and then spend their days daydreaming about the tech revolution while reading glowing earnings reports.

Growth investors also over-estimate their chances of finding the next Amazon – which means that so-called lottery ticket stocks as a group become too expensive, due to people bidding up the price of entry.

Good but not great enough

The market is not stupid, and it does a pretty good job of identifying companies with excellent growth prospects.

Many highly rated fast-growers do indeed go on to achieve great things – including massively higher sales and profits.

But investors in aggregate pay too much to get on-board. As a result, their investment doesn’t do anything like as well as the company does.

A classic example of this is Microsoft.

People talk about how Microsoft lost its way after the dotcom crash in 2000, and it’s easy to get that impression if you only look at the share price:

That does indeed sound terrible – and it certainly was if you bought Microsoft shares on 1 January 2000:

Bad luck if you bought Microsoft at the start of the 21st Century.

But Microsoft didn’t become a terrible business over that time. Far from it.

Over that long period of share price decline, Microsoft grew both sales and profits as it milked its dominant market position:

Sales tripled over that ‘miserable’ 13-year period, profits more than doubled, and earnings per share rose by 186%.

Good progress through a tough economic period, yet an investor who bought Microsoft shares at the start would have been better off if she’d just stuffed her money under the mattress.

Microsoft had decent prospects in the year 2000, and the market knew it.

Unfortunately investors paid too much to own a piece of the action.

The resultant growth was good – but not that good – so they suffered when their shares were de-rated over the next decade or so.

Even as Microsoft’s profits grew, investors paid a lower and lower multiple for the shares – mainly because the rate of growth was decelerating – which put a lid on the share price.

If the P/E had stayed roughly constant during the period, then the shares would have cost you well over $100 by June 2013.

The morale? Pay too much for your growth shares, and you’ll pay a high price in terms of poor returns.

By 2013 Microsoft’s share price had fallen enough to make it attractive to another sort of investor, who was buying into the current earnings and quality of the business and the dividends thrown off by its prodigious cashflow.

The ‘discovery’ of Microsoft by this new kind of investor (combined with a massive bull market) saw the share price recover and rise nearly 30% in the 12 months to May 2014.

You can arguably see a similar transition in Apple’s share price, as it has seemingly become ‘ex-growth’ and abandoned by its original investors, and then gotten bid up again by attracting a different kind of shareholder due to its higher dividends and share buybacks.

It’s tough to make predictions, especially about the future

It’s easy with the benefit of hindsight to see that Microsoft shares were too expensive in the year 2000.

The annual growth in earnings per share since then has been just under 10% a year. That’s okay – the market might be expected to do GDP growth plus inflation plus dividends – but it’s not what made Microsoft into Microsoft.

Yet it’s very difficult to judge how quickly a fast-growing company will expand when you’re looking at at a history of rapidly escalating earnings as well as big prospects ahead of it.

And anyone who has played with a compound interest calculator knows how differences of a few percentage points really add up.

So let’s have some empathy for those Microsoft buyers of yesteryear.

Up until the year 2000, Microsoft had been growing earnings at a fearsome rate.

Consider an investor who evaluated Microsoft’s position in the PC world, decided it looked unassailable – which it did in 20003 – and pondered buying the stock.

Let’s imagine our investor decided Microsoft’s earning’s growth would more than halve over the next 10 years or so, to just 20% a year.

Halving the growth rate seems prudent enough. PC sales were booming in 2000, Apple was tiny and smartphones and tablets not in the picture, yet it was obvious everyone and their granny would soon be on the Internet. The emerging markets were rapidly getting connected, too.

Well, if earnings had grown at 20% for the 13-year period we looked at earlier, then in 2013 Microsoft would have posted earnings per share of around $9, as opposed to $2.61!

I don’t know, but I’m pretty confident the shares would have done a lot better than the minus 50% they did achieve.

As a ballpark guess, I suspect after such a run Microsoft shares would have sat on a P/E multiple of at least 20, if not 25.

The share price might therefore have been between $180 and $225 – as opposed to the $27 it actually hit in 2013 after its steep P/E de-rating and much more ordinary growth rate.

A big market and a moat is not enough

Microsoft is an interesting growth-investing-gone-wrong case study for many reasons:

Some growth investors would argue they’d have bought Microsoft long before 2000, when it was much smaller and with more potential ahead of it.

And for some that’s probably true. Large size definitely works against growth investors.

Yet the fact is many did buy Microsoft on a sky-high P/E rating – the share price wouldn’t have got so high otherwise!

Others might claim they’d have dumped the shares when it became obvious the growth was slowing.

And many did – eventually.

Yet the Microsoft story does highlight the difficulties of growth investing.

It’s only in looking back that we can see that Microsoft was doomed to move from a high growth multiple to a more typical rating of a US blue chip. If you’d started arguing its best days were behind it too early in 1998, you’d have looked pretty silly when earnings swiftly doubled again in just two years.

For these reasons and others, I don’t usually buy expensive growth shares. When I do, I don’t tend to hold them for long.

Yet holding on is invariably part of any successful growth investing strategy.

Grabbing them by the glitches

I’m a value investor at heart, even when I buy into a sexy growth share.

So usually I’ll only make such a buy when there’s been some sort of ‘glitch’, to steal a phrase from Free Capital

, the excellent book about private investors.

The glitch hits the share price, lowers the P/E rating, and to my mind buys me a margin of safety.

I’ll usually sell as soon as I’ve got some profits in the bag.

This is a big contrast to true growth investors, who prefer to buy companies when the price is marching higher.

A higher share price vindicates their take on the company’s future. Also you will never benefit from a 100-bagger like Amazon if you take profits when the price rises a mere 30%. Growth investors need the big winners to make up for their many also-rans.

In fact, most growth investors see glitches as early warning signs that the growth story might be over – and as we’ve seen with Microsoft they are often right to.

Nothing is easy in active investing. Ignore anyone who says otherwise.

What about the worthless?

I’ve not managed to fully hold onto any growth shares I’ve bought in my investing career, though I do still have a couple of top-sliced holdings that have gone up three or four times since I bought them.

Real growth investing is too hard for me to be confident about – and that’s before we get into the difficulty of valuing companies that aren’t yet reporting profits.

Again, I’m not one of those value investors who spits at the very thought of paying up for a company that makes no money, or who says they’re all “worthless”, to quote a well-known UK investor I read the other day.

That’s silly. Nearly all companies start off without profits, and they don’t shift from being worthless to valuable the day the bottom line turns black.

Explaining why will take a whole new post, so we’ll save investing in the really speculative growth stocks for next week.

Next post: Weekend reading: Lots to read if it starts raining

Previous post: Need a financial plan? MoneyVista may be able to help – review