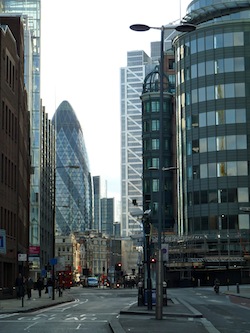 Important: This is not a recommendation for you to buy or sell any shares or to invest in commercial property. I’m just a private investor, storing and sharing notes for wider interest. Please read my disclaimer.

A couple of years ago I made the case for buying commercial property listed on the UK stock market.

The various UK REITs1 had been hammered by big writedowns that downsized their net assets (NAVs). They looked vulnerable against the large loans they’d secured against those depreciating assets. Some had to raise extra cash via rights issues.

There were also fears that banks would dump property they acquired in the boom years (or been lumbered with after loans turned sour) as they desperately tried to shrink their own books.

Buying into this scenario might have seemed as appealing as elbowing past widows and orphans for last-minute tickets onto the Titanic. But there were reasons to be positive.

Rents for the better REITs had held up more than their plunging share prices suggested. Share prices had also fallen far below NAVs. At the bear market low you could buy £1 of Land Securities’ assets for as little as 36p!

Obviously, investors feared commercial property prices would fall further, taking NAVs with them. But as it turned out, the steep fall to 2001 levels in the prices of offices, warehouses and shops was enough to tempt in bargain hunters.

From 2009, commercial property prices firmed and then began rising, especially in the South East, and the REITS followed. (Some vulture funds set-up specifically to buy distressed property in London were complaining when prices bounced back too quickly!) It proved a great time to buy.

Commercial property is an inflation-resistant asset, since both property values and rents should increase broadly in-line with general inflation. If you fear higher inflation down the tracks, it’s a good asset class to be in.

The idea is to buy cheap

Today REITs seem to have fallen out of favour again, perhaps due to fears over Europe. Well, that and the UK economy, which is now doing a good job of impersonating a hit-and-run driver reversing to make sure.

But I think the market is again being too pessimistic about commercial property.

Only a few years ago, investors couldn’t get enough of it, with new funds raising billions of pounds and helping to inflate a bubble that slashed yields and primed the crash to come. Price seemed irrelevant. Yet now commercial property looks pretty good value and the market seems to be taking a more balanced view of its prospects, the average investor doesn’t want to know!

That’s their loss. Commercial property is an attractive asset class to own, whether you’re a passive or an active investor, and I think now looks a good time to buy – not as cheap as in 2009, granted, but unless you expect a European blow-up not as risky, either.

The big players certainly haven’t capitulated; work on new skyscrapers in London is continuing apace. While I don’t think this expansion is due to any pressing shortage of floor space, I do think such confidence in the future of the UK capital is a handy wake-up call.

Note that UK index trackers will give you some exposure to commercial property, since big REITs like British Land, Land Securities and Hammerson are all in the FTSE 100.

But the real estate sector is relatively tiny – less than 2% or so of the FTSE 100 – and dwarfed by basic resources, energy, banks and the like. Personally I’d add a specific property allocation to any passive portfolio, which I’d expect to dampen volatility and increase my income over time.

(Note that very nearly 50% of that ETF is invested in the three largest REITs, which some may consider excessively risky, though it’s a fair reflection of the UK listed real estate market).

Those of us who undertake the dark practice of active investing should certainly consider the commercial property market at present.

Here’s a summary of the ten largest companies in the UK real estate sector by market cap, price to book value (P to BV in the table), and forward yield.

(Data as of lunchtime on December 14th)

As you can see most commercial property companies are trading at a discount to their net assets again (prices went above net assets earlier in 2011) and there are tasty yields on offer. Companies on lower yields tend to be either owners of only prime London assets or more development-orientated companies, or both.

Please note you’ll want to check all these figures – and a lot more – before considering an investment. Various data services define net assets / book value in different ways, and forward yields also vary. Download the REIT’s latest annual results and do your own research.

While you’re at it you should also evaluate:

Debt: How much does the company owe, how heavily is it geared against assets, and how comfortably can it meet interest payments? When do loan to value covenants kick in? (They could trigger rights issues).

Rent: How much of the portfolio is let out? Is that number rising or falling? How bad did it get in the last slump?

Earnings and dividend: REITs must pay out most of their earnings as a dividend, so dividend cover is of little use here. Instead look at how earnings are growing, in conjunction with your rent research. How hard was the dividend cut last time?

Development: To what extent are upcoming developments pre-let? Does the company have the funding to complete its work? (Not a problem with big REITs, but a factor for smaller developers with money still tight).

Sector and geography: What are you buying into, and where is it? If you’re bullish on a bounce back in The City, you don’t want to buy a load of shops in the North.

Management: Subjective and difficult, perhaps the best thing to do is look back through management’s statements in the last downturn. Many key players have moved on, however.

Personally I like the look of the big two – British Land and Land Securities – which offer the chance to buy into incredibly diversified property portfolios at a discount and to hopefully secure a long-term growing income.

The most contrarian play is probably Segro, which focuses on industrial warehouses and the like. Not a happy sector, hence the high yield. Could be worth investigating if you sense the economy bottoming out.

The big London specialists such as Derwent London and Great Portland look pretty fully priced already. British Land and Land Securities have substantial London assets, too, albeit with plenty else besides.

London & Stamford is interesting. Veteran real estate moguls established the company just ahead of the slump, but they didn’t get a chance to deploy much of their funds before the recovery began. They’ve been very cautious about investing into the rising market, and have plenty of firepower left. Could be a good option if you’re cautious on the short-term but would like some professionals running your money. Great yield.

Price is the firmest foundation

None of the commercial property companies are going to thrive if the UK enters a deep recession or the Eurozone blows up.

I don’t think either is likely, and I’d argue the general gloomy sentiment makes it a good time to be hunting for bargains. I am not claiming prices will soar next month, or even next year.

Property has generally rewarded those who think long-term – provided they’ve bought into the sector at decent prices – so even if the immediate outlook isn’t great, I think valuation makes it a good time to consider investing.

Previous post: Is it worth sticking with Hargreaves Lansdown to get Vanguard funds?