When should you stop growing and start protecting your money? 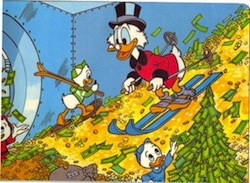 One of the troubling trials the rich face is deciding when to dial back on wealth accumulation to focus on wealth preservation.

Icarus flew too close to the sun, and plenty who’ve made fortunes have lost them, too, when instead they could have lived out their days like Scrooge McDuck in a bathtub filled with dollar bills.

On the other hand, given how quickly life expectancy is increasing (though not quickly enough for me!) and the ease with which a champagne (or even a cava) lifestyle can become an everyday habit, others adopt excessively conservative strategies too soon.

Perhaps the young-ish and rich-ish are not as greedy as they’re cracked up to be? I’ve known high-flying 30-something investment bankers to keep their money entirely in cash, bonds, and their West London property. Not a share in sight!

Sometimes they blame the onerous trading rules of their firms, but that’s hooey. The truth is once they’ve made their ‘nut’, they want to squirrel it away, as opposed to correlating their net worth even more with their market-related jobs.

You’ve got to lose to win

Protecting what’s yours may be sensible when you’re raking in six-figure bonuses each year. Didn’t Warren Buffett say the first rule was not to lose money?1

True, but you and I aren’t made men at the last Wall Street bank standing, and you’re probably not Warren Buffett, either. Buffett can apply his loss-avoiding rule by spotting a final puff in an investing cigar butt. We mere mortals have to open cash ISAs to play safe, and that will hit our returns.

Most of the past decade was unusually kind to cash savers. But over the long run, history is clear — if you’re aiming to grow your way to wealth through modest savings and compound interest, then you need to forsake the short-term preservation of wealth for the potentially higher rewards (but greater volatility) of equities.

To give a simple example of how you could split a portfolio and expect very different results, according to Moneychimp’s standard deviation calculator:

You pay a very high price for sleeping more soundly at night. The 7.5% return from the most volatile equity-dominated portfolio might not sound that much more lucrative than the 4.5% you’d get from the 75% cash-dominated one, but turning to our compound interest calculator we see:

The lesson: For most people, concentrating on reducing volatility to protect their net worth too early will greatly cap their returns.

Volatility is the price we pay for chance of a superior final outcome. But once you’ve made what you would consider enough money, this flips and you’d rather not lose it.

To see just how hard it is to plan how much money you need, have a play with FireCalc’s returns simulator to see how long your money could last in retirement. It uses US data but the general principle applies in the UK.

Start with too small a nest egg, or experience a bad run of luck with a risky portfolio, and you can be left with nothing to explain to St Peter – but many years in poverty before you have to.

How much is enough? I don’t have an answer – however much I need, I’m not there yet!

True entrepreneurs like Branson or Bannatyne will certainly never be satisfied, but then they’re in it for the money like a scorecard. Nearly everyone else will find money after a certain point does not buy more happiness, and the law of diminishing returns kicks in.

A good aim for most of us mere mortals is to have enough to replace your salary with a diversified investment income – one with a decent proportion of real, inflation-sensitive assets like equities and commercial property in the mix, to keep you going long-term.

Complicating the timing of the shift to wealth preservation, if you can ride out the ongoing volatility there’s a good case for keeping some equity exposure even in your old age, perhaps via income investment trusts or a HYP, to further guard against inflation.

Income tends to be much less volatile than capital2. If it’s too soon to worry about preserving the latter, then concentrating on the former while accepting the capital will fluctuate may be a practical compromise.

Happily wealthy every after

If you continue to work and save after you reach your income target – or if your investments do better than expected, sooner than expected – then you can look to reduce risk a little by allocating still more money to your income fund in total, but directing a greater proportion of it towards safer assets like government bonds.

Think you’re rich enough already? Then switch to preserving your wealth, and work too on simplifying a few of your tastes to have a margin of safety!

Next post: Weekend reading: Spin the wheel of satire