Help, the market has gone up! 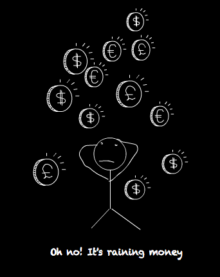 It’s a measure of how sophisticated the Monevator readership is that a sharp spike in fortune provokes worried emails.

Anyone invested in a diversified global portfolio will have enjoyed a Brexit bounce of 15% or more since June 24 – landing amid the fluffy cushions of interest rate cuts and sterling’s slide versus less Brexit-y currencies that means assets priced in dollars or euros are worth a lot more in pounds than they were before the vote.

But we’re not the sort who are just happy to find a horse-shaped gift on their doorstep. Oh no.

First, let’s whip out the ol’ mouth mirror and give those molars of success a damn close inspection before anyone does anything.

Here’s one reader’s response to the post-Brexit rally. It captures the dilemma nicely:

Monevator has made me wary of volatility in all forms.

Fair enough. Many Monevator readers will be aware that fast-rising valuations are like pigging out on ice-cream. It tastes delicious at the time but is likely to hurt you over the longer term.

But there’s little to fear from this level of volatility except your own reaction to it.

This chart shows that even a 20% swing is pretty normal for UK equities: 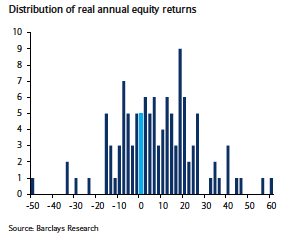 You can expect a lurch of plus or minus 20% two out of every three years for developed world equities.

(As ever, this is not a guarantee, just an averaging of the historical record).

Volatility goes with the territory of investing in shares. A sort of pact we engage in for the promise of potentially higher returns.

Remove the risk of losing money on equities and you destroy the equity risk premium – the very force we’re all relying on to deliver our future wealth.

If investing in equities was as easy on the nerves as cash then you’d earn the same negligible return that you can expect from cash.

Like hard exercise, volatility is a good pain. The problem is that trying to avoid it can make us do strange things.

Having seen the lesson pre-Brexit, I again find myself thinking, “yeah, but now we’re really in a strange state, time to pause?”

There’s always a potential reason to change your plan. But bad news is not the exception, it’s the norm.

I admire the self-awareness of our reader. Who among us hasn’t instinctively sought short-term security in the face of bulletins about the latest global threat?

It happens to me all the time.

Some of my investment contributions are automated, some are deployed at my discretion.

The automated ones always do the right thing. Cash goes to the funds that I chose when I was thinking rationally. I buy the highs, I buy the lows, and the money is put straight to work.

The discretionary cash is more of a struggle. Always harder to commit. Always prone to second guessing. “But what about this looming threat over here? But what about that shiny thing over there?”

The investment gurus who urge investing on auto-pilot have it right. We love the illusion of control but in reality we have no idea what the market is going to do. How many of us predicted a surge in stocks if Britain voted out?

Study after study has shown that even pro investors suck the big one when it comes to beating the market. Muggles are just so much shark bait if they try.

The smartest decision you can take is to remove yourself from the process.

Don’t change your strategy in the face of big losses or gains in an asset class. That’s fear and greed working against you.

For example, you think “I’ve always believed I needed 10% more gold!” right after gold shoots up, or “That stuff about economic growth being irrelevant to investor returns is spot on!” when emerging markets take a tumble.

When your noisy brain starts inventing new reasons to shift your strategy, it’s almost certainly a sign that you’re being tossed about on the current of recent events.

Our forward-thinking reader rightly searches for a healthier remedy for their itch:

Worried me wonders if there’s something that could be done now by diversifying.

It is critical that our portfolios are diversified. It’s also important to know what diversification can and can’t do for you.

Losses happen. Diversification works over the long term to ensure that you are protected from nightmare scenarios like being all-in on an asset class that goes nowhere for 20 years. It should deliver a smoother ride and good returns over the years ahead.

But diversification won’t swing into action on cue like a bodyguard catching bullets in its teeth and knocking aside the blows of a dangerous world.

Correlations can and do ‘go to 1’, especially in times of crisis.

In this recent melt-up, equities, gold, property and government bonds have all rocketed. That can happen on the way down, too.

Again, if we weren’t taking any risk there wouldn’t be any reward. The only way to avoid volatility is to pick a portfolio that avoids the prospect of growth.

As long as your portfolio is diversified across the main asset classes and has components that work in most economic conditions then you can’t do any more:

Going much beyond this is likely to prove very hard work. It can suck you into a netherworld of exotic products and asymmetric information where you’re just the patsy at the table.

Knowledge is not only power but a great stress-reliever. You’re far less likely to panic or worry if you know what to expect. Read as much as you can about the frequency of falls, the coming of crises, and the bursting of bubbles.

Know that investment losses are frequent and can be violent. A major downturn can feel awful and although recovery is never guaranteed (capitalism can end, totalitarian governments can confiscate wealth) in practice, on average, it has historically taken UK and US markets two to three years to get back on track.

Pause to reconsider your risk tolerance, too.

At the end of January 2016 the market was down about 20% from its previous highs. If that felt stressful but you just about held on then it may be worth nudging your equity allocation lower by 5-10% or so to ensure you can emotionally stand firm when a bigger storm comes.

Rebalancing is the great pressure release valve in any portfolio. If assets have shot up and become over-valued or pushed your portfolio into riskier territory then threshold rebalancing provides instant relief.

The idea is to sell off a little of the high-performing asset and buy more of the laggards so you’re selling high and buying low.

You rebalance back to your original asset allocations, ensuring your portfolio isn’t dominated by any one frothy asset that may be overheating.

The difference from calendar rebalancing is that a threshold rebalance can be triggered anytime that a bout of volatility pushes your allocation beyond your predetermined thresholds, rather than being held off until some pre-determined date.

For example if your threshold is set at 10%, a rebalance is due the moment, say, developed world equities rise from their original allocation of 50% to hit your trigger point at 60%.

The trick is to make your thresholds roomy enough so you’re not rebalancing every five minutes, cutting off winners and potentially incurring trading costs.

Fancy a trip to the wild side?

Okay, let’s indulge in some heresy for a minute.

Passive investing luminaries like William Bernstein, Rick Ferri and even John Bogle himself have talked about adjusting asset allocation in the face of changing market valuations.

In other words, you sell off a few percentage points of a particular asset class when its future return expectations are low.

Yes, it’s market timing. But before I’m accused of defecating in the font of St Peter’s in Rome, here’s how William Bernstein describes market timing:

Its spectrum stretches all the way from large and rapid changes in allocation based on things like macroeconomic parameters, relative strength, volume, sentiment, and overall gut feeling – certifiable behavior, in my opinion – to slow and relatively slight changes in allocations based on valuation and expected return.

We’re talking a step-up from rebalancing. Not just pruning your over-performing asset until it’s back in its asset allocation box, but knocking it back still more in a manoeuvre Bernstein describes as ‘overbalancing’.

Overbalancing arises out of the human instinct to meddle. Many passive investors find it next to impossible not to play an active part in their portfolios. This is one way of doing it that could add some value while serving an irrepressible human need.

For passive investors, overbalancing could have taken the edge off the worst of the Japanese stock market bubble or the dotcom bubble of 2000.

Again, Bernstein makes a subtle but telling point about where the limits lie:

This is simply an amplification of normal rebalancing.

Bernstein doesn’t outline a practical methodology in that piece but he does in this interview:

If the stock market goes up X percent, you want to decrease your asset allocation by Y percent. What’s the ratio between X and Y?

If the market goes up 50 percent, maybe I want to reduce my stock allocation by 4 percent. So there’s a 12.5 ratio between those two numbers.

Well, that’s what it really all boils down to: What’s your ratio between those two numbers?

Bernstein is indifferent as to whether your allocation changes by 2%, 4% or 5% in response to the big market shift.

Do not fixate on the number. This is not a science and there’s no magic formula. The key to overbalancing is small shifts in response to big changes in valuations.

But: Why you shouldn’t overbalance

Swimming against the tide is never easy as Bernstein points out:

When the intelligent investor does some trimming back, he usually feels like a dummy for the next year or two. And when he trims back again, he feels like a little bit more of a dummy. And he feels dumb for a while each time after he does it.

But then there comes a point, three to five years hence, when he feels awfully smart.

Can you really bear the FOMO for the five years it could take to be right? If you’re right at all? Can you really sell a red hot asset when everyone else is spraying champagne? Can you really buy the loser asset as it sinks with no sign of the market bottom? This kind of thing can make you sick.

If you haven’t been able to rebalance during such conditions previously, you should forget about overbalancing. The market can defy your King Canute act for years and there are no guarantees of success, never mind earning any juicy overbalancing bonus that makes it all worthwhile. (For instance, this commentator demonstrates that overbalancing can fail.)

Apart from anything else, tracking market valuations across multiple asset classes is a lot of extra hassle. It’s easy to drift away from a simple and iron-rigid strategy into a messy, complex, ad hoc one where you’re constantly pulling all kinds of shapes in order to outguess the market.

Most of us should stick to a simple, automated, passive investing strategy and only get involved with some light rebalancing once a year, or when the markets have swung wildly.

Now might be a good time to take a look.

Next post: Weekend reading: Brexit so far. No pain. No gain.