One of the most critical factors when considering risks and rewards in investing is time.

The graph shows the great stock market crash of October 1987. London’s largest companies lost one-third of their value in just a few days!

How would that make you feel?

Here’s what happened over the next five years:

The big crash is still visible, on the left hand side, but UK shares were back to their pre-crash levels just 18 months later. The stock market then went basically nowhere for the next three years.

The best time to invest was when it felt worse – right after the crash!

Past performance is no guarantee of the future. But we shouldn’t ignore its lessons.

Today the Great Crash of ’87 barely registers on this four-decade graph of the FTSE 100:

Will the coronavirus crash of Spring 2020 – that very visible scar on the right of the graph – look similarly trivial in a few decades time?

You might conclude markets always come back if you wait long enough.

But investors who bought Japanese stocks in the late 1980s would differ.

Two decades on from hitting a high of 38,957 in December 1989, the Japanese 225 index was still two-thirds below its previous peak: 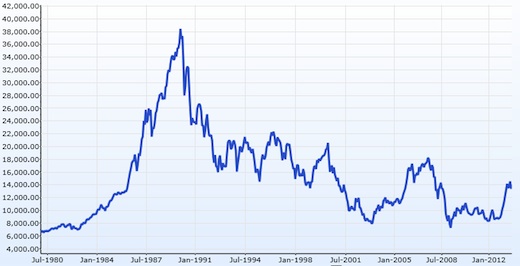 Indeed it was only in February 2021 that the index finally breached the 30,000 level again.

And as I write the Nikkei 225 is still far below its all-time high, more than 30 years later.

You say you’re a long term investor. But how long is long term?

Let’s twiddle the dials on the Monevator Investing Time Travel Machine to consider another historical example.

Gilts – UK government bonds – are the safest investment after cash for UK citizens. So a fund invested in gilts should preserve your wealth, right?

Investors in this lower-risk fund lost money, even after reinvesting all the income from gilts.

And here’s how that gilt fund did compared to UK shares:

I am not making the argument that you should own shares versus bonds, or vice versa.

Let alone for avoiding Japanese markets, or anything so specific.

With these examples I’m just trying to illustrate the right way to think about investing.

Because any investment must be considered over different time scales – not just the past month or even the past year.

So-called safety is relative, and often depends on valuation.

And things can go down and bounce back, or stay down.

Most of us have no skill at judging how different types of investment will do – especially over the short to medium-term.

Usually it’s best for most people not to try.

So we cannot invest in the past with hindsight. And we cannot be sure of tomorrow’s winners.

However we can spread our risk among different kinds of investments (or assets).

By holding a collection of assets, we can smooth out the ups and downs. We might even turn the volatility we’ve seen above to our advantage!

Different kinds of investments – such as cash, bonds, property, and shares – are called asset classes.

For example, cash is an asset class. Whereas Tesco shares are a specific investment (a tiny piece of ownership of the giant grocer) within an asset class (shares).

Here is a typical spread of returns from six different asset classes over an illustrative 10-year period: 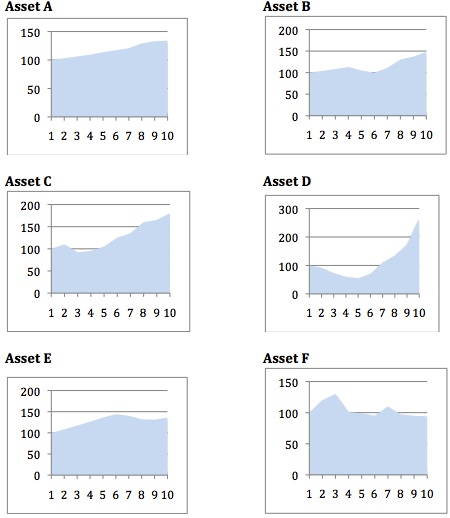 It doesn’t matter what the different assets are for our purposes. This is just an example.

The important thing to look at is the shape of the graphs, and the numbers in the following table.

Note: Numbers for illustration only

By looking at this series of returns and graphs, we can see that:

Why pick one when you can have them all?

If only we had that table in year one! Then we’d have put all our money in Asset D and made a fortune.

But we didn’t and we never will, except by luck.

We can’t be sure about the future. As for being guided by the recent past, if anything, the best asset over the prior ten years is more likely to do relatively worse over the next ten years. (But again, no guarantees).

What if we hedged our bets and split our money across all six assets?

Here’s how things would have turned out after a decade.

Note: Numbers for illustration only

What if we tried to take advantage of the volatility, by trimming our winners and adding to the poor performers every year?

As a simple illustration, here’s what happens if every year we sold everything and then reinvested our money again, equally split between the six asset classes:

In this illustrative example, annually rebalancing across the six assets classes improved our total and annual returns.

This is one of an occasional series on investing for beginners. You can subscribe to get our articles emailed to you (we publish three times a week) and you’ll never miss a lesson! And why not tell a friend to help them get started?

Note on comments: This series is for beginners, and any comments should reflect that please, rather than confuse or make irrelevant points. I will moderate hard. Thanks!