How would you spend and save if you knew exactly when you were going to die? 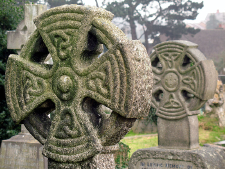 I think it was the third bottle of fizzy water she’d asked the waiter for that did it. But perhaps it was the fourth. Contrary to her protestations, I wasn’t counting.

Either way, I complained that we were spending a fortune on what’s normally free – and that we weren’t even getting good value for money, since with all that air in the bottled bubbles we were getting less water, too.

That last bit was a joke, but she didn’t see the funny side. In fact, my girlfriend informed me that I cared too much about money, and that most ‘normal’ people wouldn’t think twice about buying a third/fourth bottle of the free stuff.

“What if you got hit by a bus tomorrow,” my girlfriend said, having not had time to work up something more original. “What good would saving £2 on a bottle of water be then?”

My girlfriend has many virtues and flaws, but criticizing me isn’t one of either. (I like to delude myself into thinking that she hasn’t got much material. 😉 )

So while a cynic might note that Christmas is fast approaching and that she might be trying to spur my pride into flexing my credit card – little knowing that I have scientific proof that spending more money on gifts is wasted – I am inclined to think it was a case of a loved one trying to tell me something.

I have questioned before about whether I am frugal or just mean. My brushes with family mortality this year have also reminded me how we don’t live forever.

We don’t get two shots at today, for that matter.

It’s coming at you, through the trees

The crux of the issue is we don’t know how many ‘todays’ we have left.

I started Monevator because I saw first hand how doing the right thing in terms of getting a mortgage, paying into a company pension, and waiting for retirement could strangle your freedom just when you need it – even if it was a matter of life or death.

Now the huge deterioration in my father’s health after just a couple of years of his postponed retirement has also led to me sitting in hospital waiting rooms wondering at times whether it’s worth saving for the future at all, when that future is so hidden from us.

Death, and the unknowable nature of its arrival, is one of those almost intolerable realities that we learn about when we’re teenagers.

The idea horrifies us, and then we put it out of minds and get on with living, just as we do when we realise that our first love won’t be our only love, that we can’t live that last summer after school ever again, and that hair will start to grow out of your ears and your nostrils, just as it did with your father, or that you’ll start to point finger too readily, just like your mother.

What if instead you knew exactly when you were going to die: the time and date that a metaphorical bus would strike you down?

If you’re like me, your first thought is you’d spend every penny moving to a country without buses!

But this is a philosophical game – you can’t cheat the Reaper.

Rather, let’s take the idea at face value. Depending on how far away your death was, knowing when you’d die would surely change all manner of things, from your relationships and fitness regime, to how tardy you were in returning library books and your financial affairs.

(I’m writing largely from the perspective of a single man or woman here – if your circumstances are different please do share your perspective in the comments below!)

You will die in two months time

Stop reading now. With two months to spare, I wouldn’t bother with the Internet or blogs, let alone saving money. I have no dependents, and I would spend everything I’ve saved and more going to the places I always assume I’ll visit in a few years time. I’d try the experiences I’ve put off because they’re too expensive or difficult to fit in, and I’d generally live like my friends did when we were 20 and I was already tucking a few pounds away. To fund my romp I’d liquidate my shares immediately (no worrying about a market crash, and I also wouldn’t be around to worry about the capital gains tax bill!)

You will die in five years time

Trickier. Spend everything in a six month binge, and you’ll have to live through the next four and a half years without any cushion to fall back on. Even leaving aside the consequent lack of mortality-inspired but money-demanding hedonism in 2011 and beyond, what would you do if your car breaks down or your boiler blows up? Without any emergency funds you’d have to take out a loan, and spend your final days paying it off. Or you might not bother repaying, knowing full well you’ll be gone – in other words, your whole moral outlook on money could change. At least you could cancel all your pension contributions and spend your monthly salary with impunity.

You will die in 15 years time

On this sort of timescale, a lot of things remain the same. You’ll probably keep investing – many 60-year olds do – and you’d probably keep some money in shares. On a 15-year horizon, you’d want to choose or move towards an asset allocation with a lot of bonds and cash though. You might keep paying for private health insurance, and since over a decade residential houses have always returned a positive sum, you’d be best off buying rather than renting your home.

You will die in 25 years time

Nothing changes when you get your death letter and find a date more than two decades away, except it saves you worrying about global warming and other environmental degradation. I think most people, even quite mature people in their 50s and 60s, vaguely believe they’ll live at least this much longer, even if they don’t behave financially like they will. And it’s not a bad bet – a man at 60 has only a 1% chance of dying before his next birthday, according to this fantastic post on the Understanding Uncertainty blog.

Obviously I am only considering this issue from a financial perspective.

When asked would they’d do if they had say just three years to live, people often reply they’d make up with estranged relatives or work for charity or go back to study or something similarly massive, which begs the question of whether they should be doing it now regardless.

I also haven’t gone into detail about the exact financial steps you might take depending on how long you have left.

The reason is obvious – none of us will know in advance exactly when we’ll die.

Even incurably ill people surprise their doctors. Equally, young people with everything to look forward to such as the young team captain, Charles Blackham, who I watched on University Challenge just a couple of months ago are suddenly, tragically, no longer with us.

And that is the long-winded answer to my girlfriend’s accusation that I care too much about the price of a bottle of fizzy water.

I couldn’t care less about £2 or £2 million – it’s what that money represents now and in the future that matters.

We can’t know how long we’ve got, and so we have no idea whether that bottle of fizzy water will be our last sip that it wasn’t worth thinking about, or an expensive habit that repeated for the long-term might cost £50,000 over 25 years of investing, and so leave us much poorer in retirement, or further from financial freedom.

If we knew the exact date of our deaths, difficult decisions such as how much to invest in equities or what target to aim for with our savings would become easier, although market volatility would still leave plenty of room for error.

But we don’t, so it doesn’t matter.

It’s easy to quip that if we knew when we’d die we’d at least make a canny purchase of life insurance, or that if our death date were made public knowledge – and if the news wasn’t good – then we’d console ourselves with a more generous annuity.

In reality, we must tweak our spending and our investments as we age, and balance our outgoings today with hopefully many more outgoings to come.

It’s literally an impossible task, but one I believe that’s better than spending like there’s no tomorrow, when, touchwood, there will be.

May we all be so lucky to grow old and wealthy enough to regret not spending more today.

Next post: Facing mortality when you have a family

Previous post: Don’t make a crisis out of a crisis