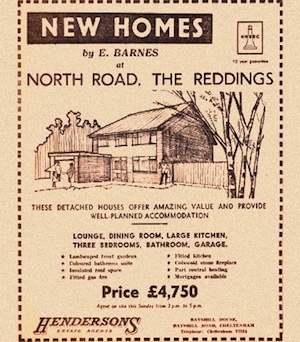 Before you can decide whether you think UK prices are too high, you need to have some notion of where they’ve come from.

Below is a graph showing roughly the past 30 years of UK house prices, which I’ve compiled using data provided by Lloyds/Halifax.

Since the Halifax began tracking historical UK house prices in 1983:

If you’re interested in a specific UK region (as I am with London) then download Halifax’s data and create your own house price graph. Admirers will swoon, and strangers will stand you rounds at the pub.

The graph shows UK house prices in blue, and London prices in red: 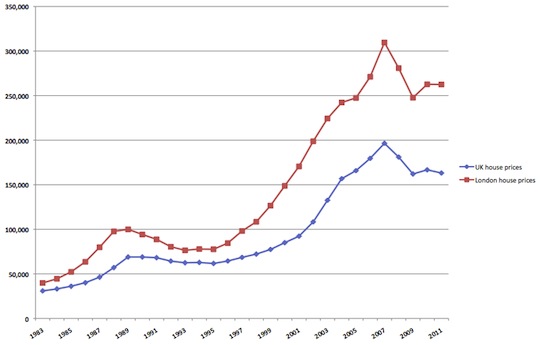 A pretty impressive looking slope – enough to make a minor Alp self-conscious. But note that this is a graph of nominal house prices. In other words, the prices are not adjusted for inflation.

We can use the Bank of England’s cute inflation calculator to work out roughly1 what the price rises cited by Halifax represent in real terms.

That’s obviously a lot less vertigo-inducing than a 400-500% rise in nominal terms, although as we’ll see later on it’s still a lot faster than wages have risen – which is probably why we keep hearing about a housing crisis. (It’s also a reminder of how property has generally tended to protect against inflation).

The Nationwide produces a house price index too, and it helpfully offers inflation-adjusted prices from the get-go.

Here is its graph of UK real house prices, which tells much the same story as the Halifax data:

(Click to enlarge this graph of UK real house prices)

The red trend line is the Nationwide’s, not mine.

Are real house prices beginning to bottom out like they did in the 1990s? Looks like they might be, albeit with a jerkier graph that hints at market dislocations such as emergency interest rates and the restricted supply of mortgages.

How have shares done compared to house prices?

We might also compare house price inflation to the historical return from other assets, such as shares.

The FTSE 100 was introduced on the January 3rd 1984 at a base level of 1,000 – very close to when Halifax began tracking house prices.

On a 1984-ish to 2011 snapshot, then, it looks like a draw between residential property and shares.

But remember that those houses would have required money to be spent on their upkeep, and many home owners would also have splashed out on price-boosting enhancements like loft conversions and extensions. None of those costs are factored into the house price index.

In contrast, the equivalent costs to companies should be reflected in their share prices in the long term.

Are you also thinking that shares pay a dividend, which isn’t caught by the index’s return? Good spot – and true – but remember that houses also deliver an equivalent, in the form of giving someone somewhere to live (or imputed rent, in economic terms).

Finally, the day-to-day level of the stock market is much more volatile than house prices, making point-to-point comparisons with housing a little dangerous. What if we’d done the comparison in 1999? Or 2009?

I’ll be coming back to look at this more deeply in a later post.

UK house prices down, a bit

In historical terms, UK houses have clearly been a decent long-term investment for the past 40 years. Over shorter spans, though, the data shows that the property market undergoes booms and busts just like any other asset class.

As we’ve seen in the graphs, in recent years boom has most definitely invited cousin bust around to stay, and he’s totally trashed the living room. Prices have accordingly come down a fair bit in the past few years, especially in real terms, though less so in London.2.

Arguably, the falls are not as much as we might have expected, given how unemployment has risen, and how difficult it is to get a mortgage. And recently house prices have stabilised, despite neither of those conditions reversing.

It’s also worth noting the Halifax and Nationwide data is likely skewed because it’s based on those who need a mortgage – and we’re in a credit crunch.

Cash buyers (oligarchs, bankers, wealthy Greek and Italian refuges, and football stars) can bid up prices without any such piffling restrictions, as we’ve seen in Mayfair and Knightsbridge.

So the building society data probably over-estimates the price falls.

Many economists would have predicted a much bigger house price crash, if they were told a few years ago that the UK would undergo its deepest recession since before World War 2, or that so few first-time buyers would be able to get a mortgage.

Maybe things are different this time?

I think it’s too soon to say whether house prices having finished falling, given the economic uncertainty. The declines may well resume when interest rates rise, or if unemployment heads higher.

For now though, the failure of house prices to drop as much as many predicted before the crash (including me) makes me wonder if I underestimated a structural shift to higher UK house prices in real terms.

It’s claimed that Albert Einstein said the definition of insanity is doing the same thing over and over again, and expecting a different result.

I agree. I’d like to own a house someday, and I don’t want to keep sitting out the property market if it’s for no purpose, only to watch prices take off once more.

“When the facts change, I change my mind,” said the economist Lord Keynes.

So did I miss some changed fact in my previous analysis of house prices? As the old socialists used to chant: What about the workers?

Next: The house price to earnings ratio.

Next post: Weekend reading: Are REITs right when saving for a deposit?