Do US Treasury bonds protect UK investors better than gilts?

I noticed a few of the wilier cats among the Monevator crowd were holding US government bonds going into the coronavirus crisis. They seemed pretty pleased with themselves, so I decided to see what’s up.

After all, there’s no better time to change your strategy than after the horse has bolted…

Most of the passive investing gurus advise holding high-quality domestic bonds (i.e. gilts, if you’re a UK-based investor). But then, most of the passive gurus are from the US. What if there’s some kind of American Exceptionalism playing out here and I’ve been a Lee Harvey Oswald-style patsy all this time?

To assuage my fears I logged into the ETF-screening and portfolio-building service, JustETF.

I compared unhedged1, intermediate government bond ETFs of the US, Euro, Global, and UK persuasion.2 I pitted them against each other and an MSCI World ETF during as many stock market bloodlettings as possible. My fears were un-assuaged. 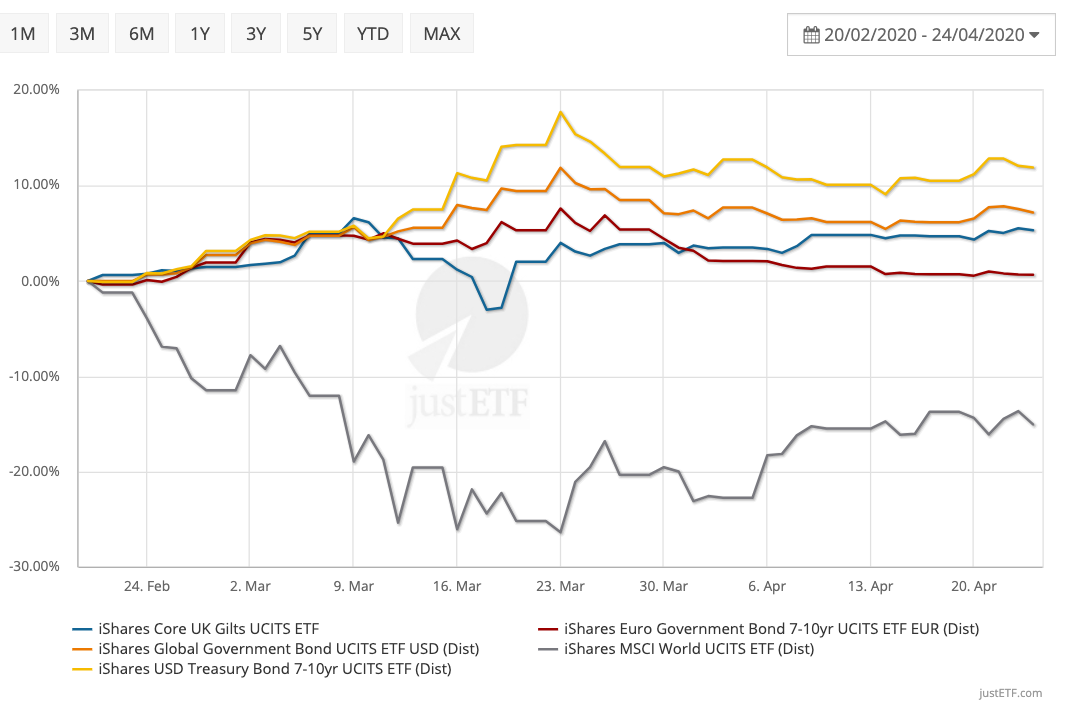 The yellow line is why those Monevator cats are purring about their US Treasury bond holdings.

World equities hit bottom on 23 March. Our team of high-quality government bond ETFs were all straining in the opposite direction that day – stopping our portfolios and us jumping off the ledge.

Some did more work than others, however. As world equities clocked a loss of -26.4% (relative to 20 February), the bond ETFs countered with gains of:

Gilt returns peaked on 9 March and then the pound slid 12% through to 23 March. Gilts turned negative on 18 to 19 March while overseas bonds were buoyed by the falling pound. The Euro has fallen away since, but US Treasuries are still up 11.9% to gilts’ 5.3% on 24 April. 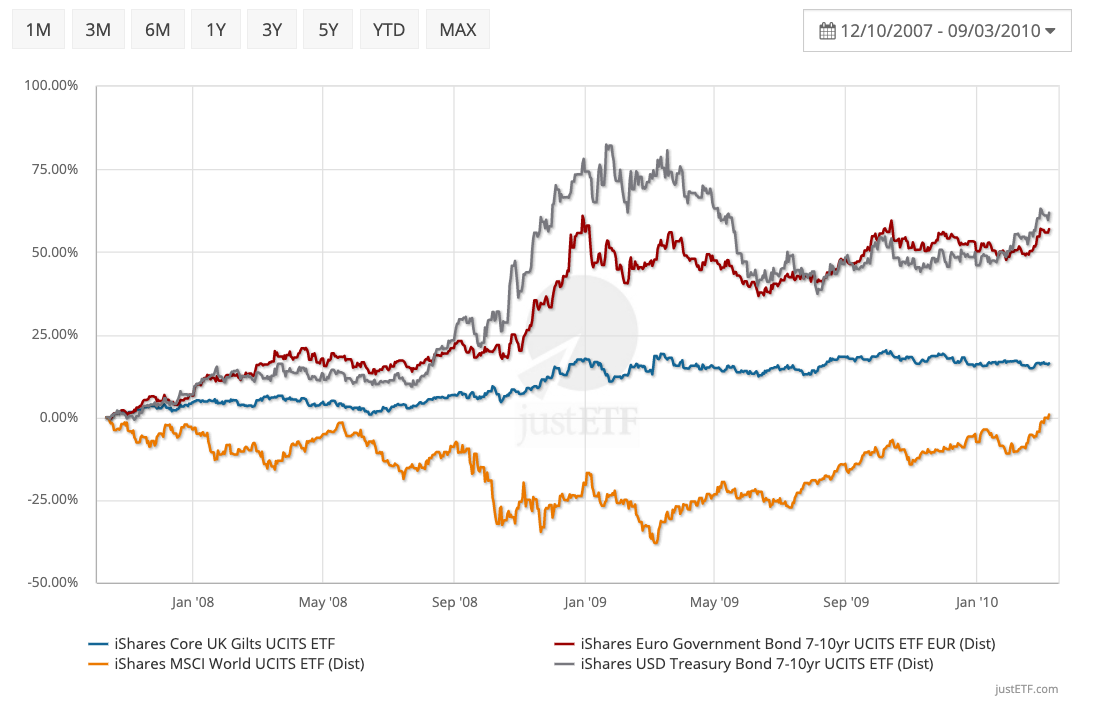 The same ETFs are back in play bar the global government bond effort (it was only launched in the midst of this crisis).

The world turned dark on 6 March 2009 with losses reaching -38%.3 Thankfully our bonds would have offered a ray of hope:

The pound took a beating against the US dollar in 2008 and, though it recovered some ground in 2009, by the end of the crisis the US Treasury bond ETF was up 62% versus 57% for the Euro gov bonds and 16% for the gilts.

Clearly we’d have all slept more soundly with US Treasuries in our portfolios.

Incidentally, notice that shark’s jawbone image you get when you compare the grey line’s upward flex versus the orange line’s downward gape from October 2008 to August 2009. That’s what textbook negative correlation looks like and that’s why we hold high-quality bonds in our portfolio. 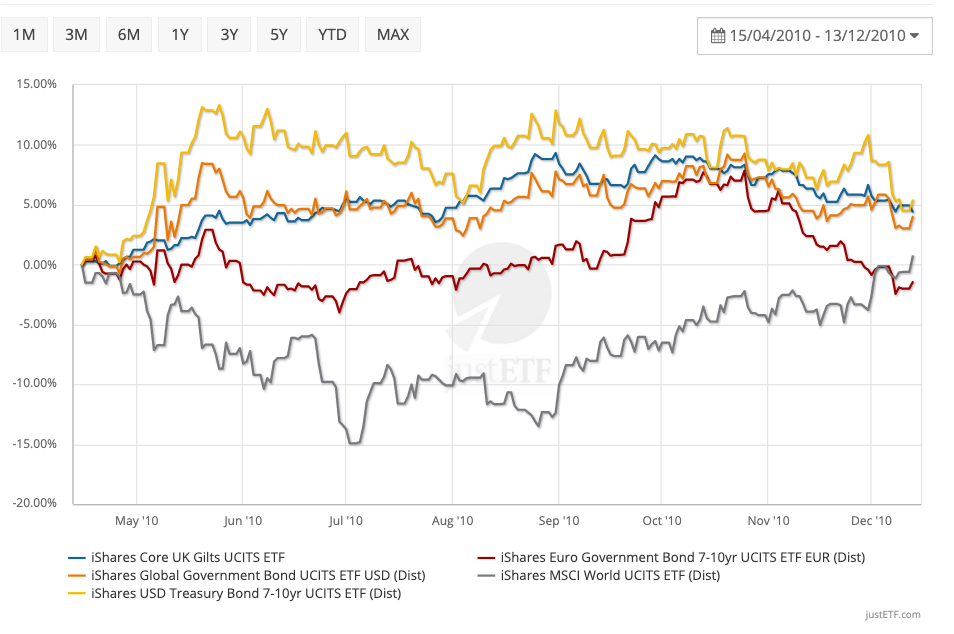 Okay, Euro Government Bonds were not the place to be during the European Sovereign Debt Crisis. Fair enough. Once again US Treasury bonds proved to be the safest of safe havens, though there was less than a percentage point in it by 13 December 2010.

It’s starting to feel a bit voyeuristic – like I’m some kind of rubber-necking vulture looking for another carve-up.

Still, why stop now when we’re having fun? 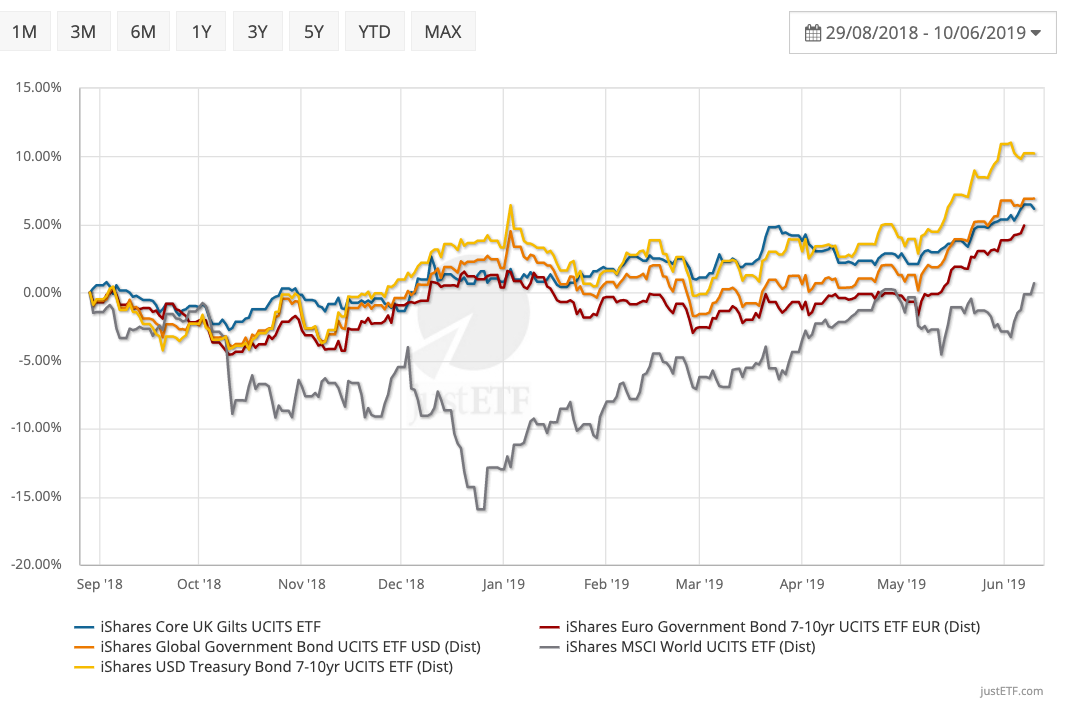 World equities delivered an unwelcome Christmas present of -15.9% in just a few months to 24 Dec 2018.5 Bonds took until 3 January to respond properly, after the sales were in full swing:

Again US Treasuries were the place to be in comparison to gilts.

JustETF doesn’t have the data to take me back further in time. But if the last 12 years’ worth of downturns are anything to go by then I have just one question…

Is this a thing?

US Treasuries look better than gilts for UK investors when it comes to stock market crash protection over the last decade and more.

But it’s also nice if your assets provide long-term returns, so let’s see how our options stack up on that score: 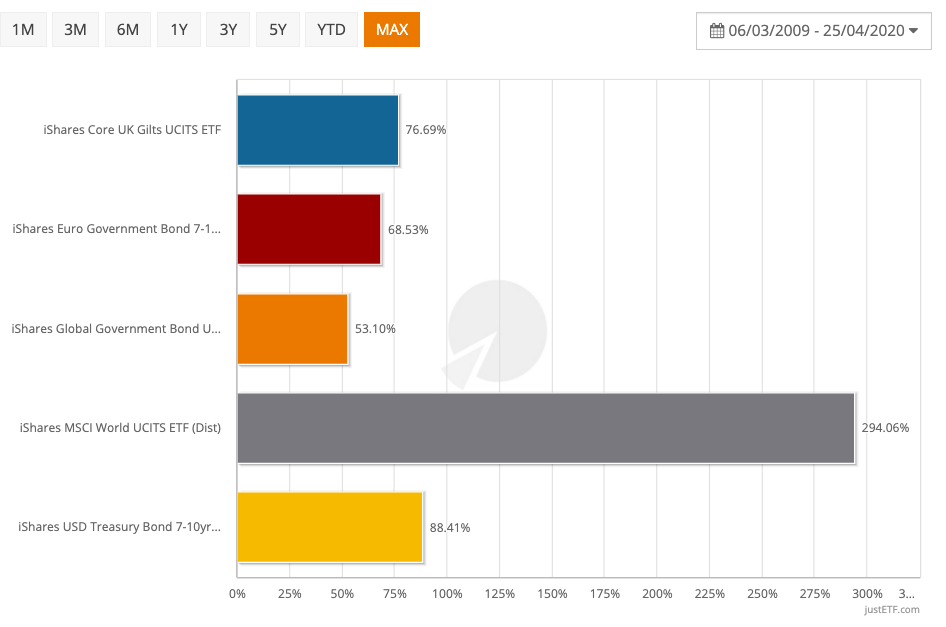 US Treasuries win again.6 Not by a devastating margin, but you wouldn’t say no.

And there’s certainly a rational story to justify holding US government bonds. America is the global superpower and the dollar is the world’s reserve currency.

Why wouldn’t everybody run into the arms of US Treasuries during a meltdown?

Moreover, the pound is described as a pro-cyclical currency: it tends to fall when the global stock market falls. In which case, you might well expect to see an exaggerated spike in US Treasury returns (as measured in pounds) at the very moment equities nose-dive, especially as currency volatility is meant to dominate government bond returns.

Wait! Let’s get a longer-term perspective

A portfolio is for life, not just for bear markets. 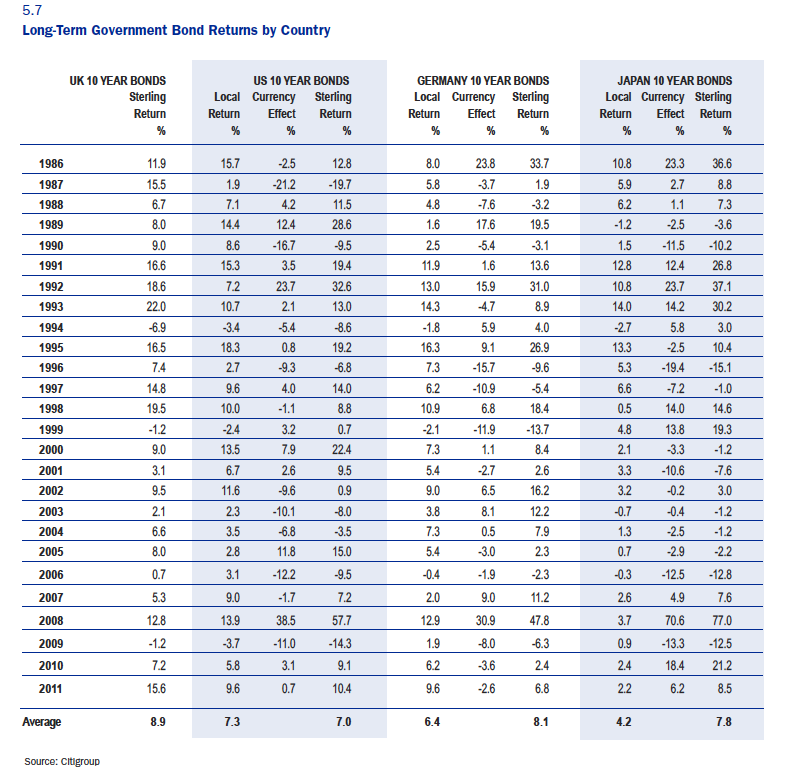 This table comes from the Sarasin Compendium Of Investment, albeit from 2012. It shows that US Treasury bonds are far from a no-brainer for UK investors when viewed over a different timeframe.

This comparison of 10-year government bonds shows that UK investors averaged a return of 8.9% per year versus 7% for US Treasuries of this period when returns are measured in pounds (see the Sterling Return column).

Notice that in 1987 – the year of the Black Monday Stock Market Crash – US 10-year government bonds returned -19.7% in pounds, whereas gilts brought home 15.5%. The falling dollar wiped out 21% off the return of Treasuries.

Global equities suffered another set back in 1990 as Saddam Hussein invaded Kuwait and Japan entered its multi-decade slump. Gilts spiked 9% while US Treasuries dropped -9.5%. Unhedged currency exposure backfired again, this time to the tune of -16.7%.

So. Maybe this special relationship isn’t all one-way.

The monumental returns of the 80s and 90s (I weep that I was in short trousers not the market then) ended with a pop as the dot-com bubble burst. US Treasuries trounced gilts in 2000 and 2001, but suffered a reversal in 2002.

If you scan your eye down the Currency Effect column, you can see from the size of the effect versus return that most of the differential between gilts and US Treasuries (sterling return) is explained by exchange rate volatility. 2008 was the annus mirabilis as the currency effect added 57.7% to the year-end return of US Treasuries.

Still, it’s surprising to see that gilts came out on top over the whole 15-year period.

It’s a struggle to go back much further than this with the data we have access to. We do know that the 1970s oil crisis smashed up global equities in 1973-74 and that UK equities suffered their worst loss on record during this period: -71%. Gilts were a car crash, too, going down 50% between 1972 and 1974.

Meanwhile, the pound lost just -1.28% to the dollar in 1973 and then gained 1.29% in 1974. I highly doubt you’d have noticed that shimmy, what with the oil crisis, recession, double-digit inflation, miners’ strike, the Three-Day Week, and general elections every five minutes.

Did any Monevator readers have market exposure during this one? I was there but my only assets were a £5 Premium Bond, a romper suit, and dimples.

Where does that leave us?

Good question. Opting for US Treasury bonds is a currency play for UK investors pure and simple. You’d be betting on the pound falling against the dollar as investors head for the safe haven hills.

Despite recent history and the supremacy of the States, events don’t always unfold as expected. I read a couple of research papers that said the Euro was a reliable safe haven until it wasn’t. And of course, we’ll only find out that reality is no longer following the script at the worst possible moment – when we need diversification the most.

Multiple papers concluded that UK investors should hedge any global bond exposure they have, including this report from Vanguard:

Thus, hedging away the currency risk is necessary if global bonds are to provide the maximum level of diversification and fill the traditional role of high-quality bonds in a balanced portfolio.

Ultimately, I’m a passive investor because I want to keep my investing life simple. I’m unlikely to be agile or informed enough to know if there’s no longer good reason to believe in the dollar as a ‘risk-off’ currency.

Yes, I get my head turned when I come across a fund that would have been amazing to hold these last few years. But by the time I’ve found out about it, it’s already too late.

My portfolio is built for the next 40 years (I hope) and I believe it’ll get through the next 40 months just fine. 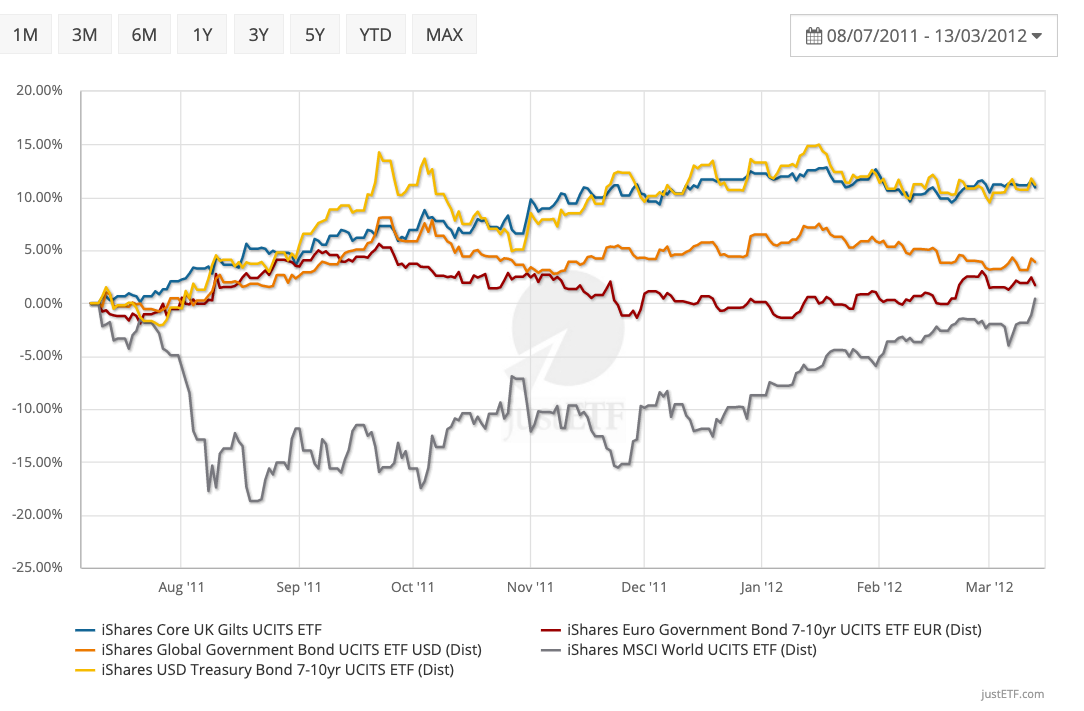 After I finished the post, I had a nagging doubt I’d missed something and here it is. The oh-so memorable August 2011 slump. At last there’s a recent-ish downturn when US Treasuries didn’t completely dominate gilts. World equities had their darkest hour on 19 August 2011 bottoming out at -18.7%.7 Gilts topped the charts that day:

US government bonds had nudged slightly ahead by the time equities nosed into positive territory on 13 March 2012. In reality it was neck-and-neck with US Treasuries on 11.2% and gilts on 10.9%.