Three lessons about charity and money from Martin Lewis of MoneySavingExpert 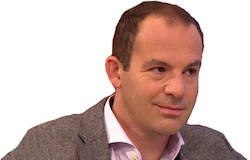 I sometimes wonder how much money Monevator has saved people by warning them off high cost investing.

Egotistical? Perhaps, but given our lack of serious financial rewards to-date from blogging, we’ll take whatever motivation we can get!

On that note I was chuffed to to hear about the journey of Monevator reader The Rhino:

If I had to pinpoint the start of it, it was that portfolio post on Monevator. To cut a long story short, education is possible as I am an example of it.

Fast forward 5/6 years and I have a set-up where my salary typically only represents about 10% of my income and is pretty much optional.

The amount of stress that removes from operations at ‘The Rhino Plc’ (yes I am one of those saddos who views themselves as a business) is significant and can be thought of as the gift that keeps on giving..

So chapeau to all at Monevator. I don’t know for how many, but certainly for some, its educational value has been immense.

This is seriously inspiring – not just for me, but I hope also for any readers who are just starting to get to grips with their own investing adventure.

Still, whatever difference Monevator has made surely pales into insignificance compared to the billions the British public has saved thanks to Martin Lewis, founder of MoneySavingExpert (MSE).

Lewis is a familiar figure these days thanks to his TV shows and his portrait being stuck all over his website. His site was already getting a thumping 1.5 million visitors a day in 2013, and given how it seems to have thrived since he sold it to Money Super Market, I expect it’s even more popular now.

So while I’m still looking for ad revenue like a child rattling around coppers in his piggy bank, Lewis processes to his office each day in a gilded carriage pulled by pandas.

And you know what?

I don’t begrudge him a penny.

Firstly, I know how hard it is to build up an independent website.

More people will visit MSE by the time you finish reading this paragraph than will ever read this article. To have created such a powerful media property from scratch is incredible, and I take my hat off to him.

Secondly, while I’m aghast at the stratospheric heights being reached by executive pay and was pointing out the banking emperors had no clothes long before it was fashionable to do so, I greatly admire entrepreneurs. As far as I’m concerned they fully deserve their rewards.

The incentives that turns a few rare risk takers into multi-millionaires are part of the scaffolding of capitalism that drives our economy and improves our lives – the complete opposite of the overpaid rent-capturing executives who’ve gamed the system and gnaw away at its credentials.

So well done Lewis for passionately executing on his good idea, and for making as much as £87m from its eventual sale, including £25m this summer and a final £19m earnout just last week.

He’s giving a big chunk of it away.

In the most recent announcement, Lewis said:

On the back of receiving this payment the charity, Citizens Advice, will receive another £1m.

Also from my existing charity fund, both the Trussell Trust and the Personal Finance Education Group will get £500,000 to fund their important work in financial triage and education.

It follows the pledge Lewis made when he first sold MSE that charities would receive £10m from the proceeds.

Since then the share price of Money Super Market has risen further, which has boosted the value of Lewis’ share donations.

Charities have already received around £4 million. Lewis calculates there’s another £16.5m to come.

Carp if you want to that you’d give away millions too if only you had millions in the first place, but I’m impressed with Lewis’ generosity.

We all like to think we’d be more charitable “if only…” but would we?

I have my doubts.

Doesn’t the long history of the rich getting richer prove how hard it is to say enough is enough?

I read hundreds of financial press releases every week. Lewis’ charity pledge sticks out like an ATM in the Arctic.

As for needing to be wealthy already, I was reading the other day about a couple who live on 6% of their income so they can give the rest away. Extreme – and not for me – but eye-opening.

Here are three lessons I take from Lewis’ donations.

1. It’s easier to go without something you haven’t got

There are doubtless financial angles as to why Lewis declared his charity donations upfront when he sold MSE, and also when he received more money last week.

Perhaps it’s more tax efficient? If so, I’d expect no less of the man. He’s the Money Saving Expert, not the Moolah Splurging Moron.

But whatever the financial motivations, immediately giving away the money is also psychologically astute – and instructive to anyone trying to get control of their finances.

You see, it’s very hard to give up substantial money once you’ve got used to having it.

We know from the disposition effect in behaviorial economics how much people hate losses.

Or think of all the people who stay in jobs that they hate – even when they could change career or downsize and retire – just because they can’t face losing that big salary.

By giving some of his fortune away before he’s had a chance to marvel Gollum-like at it in his bank account, I suspect Lewis knows he’s making things less emotionally painful for himself.

It wasn’t ever his to lose – not when it’s earmarked for something else.

We can use this trick, too, when trying to save more money:

All this helps curb lifestyle inflation, where a higher salary just leads to higher spending that keeps your finances standing still, without making you any happier.

Controlling such inflation might mean you avoid wasting your raise taking Uber everywhere, instead of taking the tube.

For Lewis, giving away £10m might have put a private helicopter off the agenda.

Either way, setting it aside first stops it feeling like a loss, and so helps further your higher aims.

I am lauding Lewis quite a bit in this post, so let’s set the record straight.

Martin Lewis is selfish, and he’s interested in his own happiness.

Well, many studies have proven that giving things away makes us happy.

In one example, University of Columbia scientists said they:

…wanted to test our theory that how people spend their money is at least as important as how much money they earn.

In another study, researchers scanning the brain found that even people forced to pay for the public good saw their neurons light up, but that:

Both pure altruism and warm-glow motives appear to determine the hedonic consequences of financial transfers to the public good.

And in 2014, Harvard researchers chimed in:

…studies show that people who spend money on others report greater happiness.

The benefits of such prosocial spending emerge among adults around the world, and the warm glow of giving can be detected even in toddlers.

Giving is a feelgood drug, albeit a potentially expensive one.

Finally, it’s notable how Lewis has very particular aims with his donations, which are strongly linked to the educational zeal that brought him success with MSE.

I love the CAB, its voluntary ethos and the great work it does. Yet also because its debt counselling funding had just been cut by the Government at such a crucial time in the recession. It should not be for private individuals to make up this gap – but it was needed and I wanted to expose that.

Plus few people realise the CAB is a charity, even those who use its services.

So many who’ve been helped don’t consider giving back when things are better. This needs to change as the organisation desperately needs support.

Or consider another project he’s supporting, The Trussell Trust, which combines food banks with financial advice.

There are myriad excellent causes in the world, and lots of us reach for the obvious ones like curing cancer or heart disease when we want to do our bit.

Obviously I wouldn’t argue against supporting that great work!

However I do suspect that for those of us who’ve taken a greater interest in our finances – even if at a more modest level than Martin Lewis – there’s something to be said for thinking about what is closest to your heart, and to your success, when deciding where to direct your giving.

Wealthy donors are sometimes lampooned when they fund a library to be built on their old college campus.

They couldn’t get the tutors or the girls to pay attention when they were there, but now their name will be on everyone’s lips!

Well, perhaps there’s a bit of that, but I also think it’s a case of wanting to stitch a life story together.

Similarly, I have no evidence but it wouldn’t surprise me at all if Lewis had the thrust of these charitable donations in mind long before he sold his website, perhaps even back when he was still pulling all-nighters to make it a success.

Very driven people often see a larger goal beyond themselves, and they can use that vision to help get past their more mundane targets, too.

Many personal finance gurus will tell you that if you aim to give away 10% of your income every year, you’ll get it back with interest.

I haven’t tried anything so concrete, but writing this post I am wondering if I should.

How do you feel about giving? Do you find it a present day motivation or something for the future? Or do you feel you do enough with taxes or bringing up a family, perhaps? Let us know below. No judging!

Next post: Weekend reading: The grandfatherly advice you maybe never had