Are you childish about money? The origins of our money mindsets 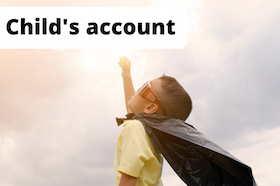 Covid restrictions were easing, and I was mildly thrilled to be in the garden of some dear friends – a couple I’ve known for decades.

Thanks to lockdown building works, their house had grown since I’d last seen them. So had their twin boys.

But my friends still had some personal growth to do.

They’ve always bickered. They were bickering again and to be honest that was also comforting.

But it seemed a shame.

My friends were past the hard slog phase of their life. Yet they didn’t seem ready to enjoy the sunny uplands.

“Finally we can get away after 12 months in this house and I don’t want to be arguing about spending £50 on a few croissants at the hotel,” he said.

“She’s annoyed because we’re going to Wales. And she’s too tight to understand the value of giving the boys an experience like learning to ride.”

“I’m not annoyed. But it’s going to be raining and it’s going to cost £3,000 for five days and you wouldn’t let me even look for a cheaper place to stay.”

“She’s annoyed because we’re not flying to Portugal. Even though we would spend more if we did!”

“I just want to get value for my money. Not rain in Wales.”

“Well I paid for it anyway! I want the boys to burn off some energy, and we can easily afford it. This place is great – friends told us about it. Why spend hours bickering about £50 on breakfast?”

“I just believe we can get the same experience for half the price,” she said. “Maybe somewhere warm, too.”

“Get this…” he sighed. “She wants us to drive there – to Wales, for seven hours – because the hotel is a few miles from the station and I said we’d just get a taxi. She’s complaining taxis are a waste of money. As if seven hours driving isn’t a waste of time.”

“It’s not a hotel – it’s a horse farm. And I don’t want to be the mug that turns up from London in my Hunter wellies with banknotes falling from every pocket. I am not that dumb bitch!”

That silenced us all for a moment.

So, you think you have a handle on this pair?

London is expensive. Raising children, too, and they have twins. A double helping of expenses moving through their budget like an anaconda swallowing a turkey.

Money is tight. One of them thinks this is best addressed by a staycation. The other by saving on avoidable expenses like paid-for breakfast and taxis.

We can see both sides, right?

But here’s the twist: money isn’t tight for this couple.

Both of my friends – who are not married and have always kept their finances separate – are now (multi) millionaires in their own right.

True, being a millionaire isn’t what it used to be.

But clearly they can afford a mini-break in (lovely, incidentally) Snowdonia.

“Why is she squabbling over this? Can you talk some sense into her? She listens to you. I don’t want to be faffing over fifty quid for the rest of my life when I could be enjoying myself. We have – what – 30 years left? Maybe 20 good ones. You know us well enough for me to say this… We could afford to take the same holiday every week for the rest of our lives. Every single week!”

It didn’t seem like the best time to bring up sustainable withdrawal rates.

“He seems to think having money means it’s perfectly okay to be taken advantage of. Well I don’t. I’ve shopped around for cheaper flights and better deals all my life. Why should I stop now? It’s careless.”

Now we were getting to the bottom of it.

How they made it

Some context before we get to the money shot.

He has always had money. Born into relative privilege – public schools, annual skiing holidays, aggressively spendthrift friends in his 20s – he was also unfortunate enough to inherit early.

She had a far harder upbringing. Messy home life. University the escape route. By her own admission she was fortunate to join the small company she did 15 years ago. But she worked most weekends to stay at the top.

Last year her company was acquired. Years of stock grants paid out.

So on paper they now have roughly the same net worth.

The snag is that what their net worth represents to them (and how they obtained it) means that they see money (and how to use it) very differently.

He has never had to worry about money. He has had other hardships (as I said both parents died young) but solvency has never been his concern.

He’s seen money used as a tool since childhood. His family speculates, invests, wins and loses, and celebrates freely when things go right.

And while I wouldn’t want to suggest he was on the shortlist for the Bullingdon Club, he has certainly moved in circles where to spend money without any visible care is a virtue, rather than a vice.

Her childhood was much more threadbare.

But it’s not just that she now wants value for money for financial reasons.

It’s that saving money, shopping around, getting deals, not being that ‘dumb bitch’ as she put it – these things have defined her.

He is a product of his upbringing, though maybe harder for many of us around here to identify with. Fretting about £50 is demeaning. It spoils things. Begrudging spending on friends and family is somehow unloving.

For her the price of avoiding being a slave to money is eternal vigilance.

For him that very vigilance is being a slave to money!

Their different life experiences – and these resultant money mindsets – are animating how they interact with money today, and fueling their conflict.

Perhaps ironically, the older I get the more I see how such childhood experiences shape our later attitudes.

This is universal. It’s nothing to be ashamed of.

But it’s worth figuring out how your money mindset was formed in order to avoid some of these problems.

Perhaps your parents had a scarcity mindset? They never risked changing jobs or rocking the boat at work. Only saved in cash – nothing riskier like shares. Urged you to get and keep a stable job.

Or maybe one parent was a sometime successful creative? Lurching from feast to famine. Ending up with riches – but before then vanishing from your life for five crucial years when things were going badly?

Did you live in a big house from the day you left the hospital because your grandmother inherited a fortune?

Or maybe your family has never had money. Nobody went to university, either. All this seems like science-fiction to you. But you have come across the concept of financial freedom and you’re wondering if you can have it, too.

All these different experiences will shape how you think about money. And often in contrary ways! We rebel as much as we follow an archetype.

The key is understanding where you came from, and how much is still relevant to your life today.

Our money mindsets must move on

In picking her battles over small amounts of money when she now has bags of it, my friend is a bit like a Japanese World War 2 soldier stuck on a Pacific Island in the 1970s.

Still fighting a war that in their minds never ended.

I know a couple of self-made people from modest upbringings who hate their work now but they just will not stop. They say they don’t want their kids to ‘suffer’ like they did (and their parents did) by having to worry.

They intend to leave their kids a small fortune to solve this.

What they don’t realize is that with their private school education, top-flight university degrees, and a decade of bringing similarly well-off friends back to the family home at weekends, their children are in a thoroughly different place to them already.

Indeed if they really want to worry about their (blamelessly) entitled kids’ relationship with money – sort of futile, I suspect – they should start thinking about very different problems altogether.

But you can hardly fault the motivation.

At the other end of the spectrum, in my professional life I’ve also seen people make a lot of money and become obnoxious. Leave partners, laugh at those who cashed out with less, grow awful goatee beards. They try to be something they’re not – at least until the hedonic adaption kicks in.

Thankfully it seems to be just a phase they go through.

In these cases it’s hard not to see the geek who was laughed at in school still trying to show the world they’re worthy of respect.

I’m no psychologist and I’ve struggled with this money mindset stuff myself.

For example I wrote about how as soon as I earned more than my father, I took my foot of the gas.

I don’t think earning a fortune is the be-all. But I do think that was a dumb reason not to earn more.

Then there is my internal debate over frugality versus simply being a tightwad.

Still, I don’t let my own issues and failings hold me back from giving my friends my unqualified advice.

I explained to my friends that I thought they were each acting out their childish beliefs. No offence!

And I suggested they create a joint ‘rest and recreation’ account that they funded with significant cash inflows every month. Approaching five-figures between them.

Family adventures could be funded from this account, which they can easily afford indefinitely.

They were not to squabble over spending this money. That was the whole point. At the same time they should be alert to their transferring the bickering to another aspect of their financial lives.

(They are looking to buy a new house soon. And I know in that battle I will be solidly backing her view instead…)

My friends’ issue may seem like a high-quality problem to have.

Most of us could do with more money. We are best-advised to book holidays months in advance so that we get more value from looking forward to the experience, stretching our spending further.

In contrast my friends need to stop shrinking the dividend from their quality time. They are doing this by turning every indulgence into an argument.

But wherever we are ourselves, the takeaway lesson is universal.

Your inner child is still trying to pull the purse strings. If you don’t notice how then you will be doomed to misunderstand money all your life.

Can you see a little you telling you what to do? Share your money mindsets in the comments below…