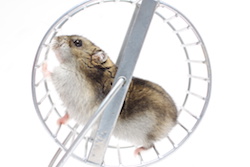 This is a bit of a meandering and personal rant. Feel free to skip it!

A new year, a wobbly stock market, and naturally a not-so-young investor’s thoughts turn towards topping up his SIPP.

And as I pondered how big a lump sum to shock and awe the boys down at Hargreaves Lansdown with, two factors came to mind:

I’ve been self-employed for most of my working life, but I’ve only been set up as a Limited Company for about a third of it.

And to be honest, my earnings have only really been big enough to make much difference how I paid myself for the last four or five years.

(Before then I was mostly on borderline artist-in-a-garret rates, at least compared to my conventional London friends).

Now if I do nothing from April, the new dividend tax rates mean my tax bill will be around £2,000 higher than it would have been under the old system – thanks to a 6% rise in my effective tax rate.

We debated whether this was fair when the change came in, so let’s put that to one side.

What interests me now is how I find myself responding.

I’ll say right away that I’m not a very money motivated person.

That might strike you as an insane comment to make, given that I run a personal finance website and spend half my days clucking over my ever-growing nest egg.

But it’s sort of true.

I’ve never followed any line of work for the pay check, really (as my employers from my 20s would no doubt gleefully confirm).

And I don’t spend much money, either.

In fact I probably look like a bit of disaster to some of my peers.

What matters to me is freedom to do what I like – or more accurately to avoid doing what I don’t like.

That’s why I am self-employed, and why I far prefer to work from home.

It’s also my motivation for investing: I find everything about conventional work suffocating.

You’re having a half!

Given my ambivalence towards slaving away for mere money, taxation is a vexing issue.

Without wanting to get political (my post-Thatcher reflections were a better place for that, or even – contrarily – my lament about income inequality) I’m happy paying roughly 20% or so in income taxes.

Any more tax than that and I strongly suspect I’m just supporting other people’s lifestyle choices, rather than the essentials of State and a worthwhile safety net.

Unfortunately, add together corporation tax and the new dividend tax and I will be paying an effective 46% tax rate1 on any income over £43,000 or so – and in reality I’ll be paying it well before then, given my portfolio still has unsheltered savings, bonds, and equities outside of my ISAs and SIPP, where any cash returned will register as income.

Now £43,000 might strike some of you as a lot of income, depending on how and where you live.

But trust me it’s very mediocre among my peers in London.

Yet striving to boost my income – only to hand over almost half of the extra to the Government?

I find the thought pretty demotivating.

One obvious solution is to direct all the would-be higher-rated income into my SIPP instead.

As I say, I’m not in the mega-earner category or anything like it. So this could effectively shelter (or at least postpone) a good swathe of my income from the new dividend tax meat cleaver.

But sadly, that’s where those upcoming pension changes start to worry me.

Could George Osborne bring in new restrictions, or even retrospective measures?

It wouldn’t surprise me at all.

I have plenty of other thoughts swirling around about all this.

For example, it makes clear yet again how much better it would be to own my own home from a tax perspective.

While I desperately try to grow my investment portfolio as tax-efficiently as I can and to keep manageable the tax take on my income that after all has to pay the rent, my friends who own their own places see their (lottery winning) tax-free capital gains roll up year after year after year.

Of course they’re not paying tax on the imputed rent element of their home equity, either.

And then they bewilderingly declare that their £750,000-£1 million property is not a financial asset, just to further annoy me.

Home ownership in this country really is the killer tax break that keeps giving.

But with London prices having moved from extreme to insane to “oh, so this is what my grandmother meant when she said flinched at 50p for a bag of chips that used to cost a ha’penny”, that’s for another day.2

No, I’m thinking I should simply forget about earning more money.

Instead I could keep my lifestyle costs low and pay myself with free time.

Yes it will delay financial independence by a few years.

But given the upcoming tax whack and the unsheltered assets I’m already struggling to tuck away into ISAs each year, not by so much as it might.

And best of all?

Note: Thoughtful responses about how you personally address these conundrums very welcome, but ad hominem attacks declaring that since I earn more than you or your cousin Nigel I should be happy I don’t pay 80% tax rates will probably be deleted.

Next post: Weekend reading: Being wrong can be alright, but being in denial is a disaster