10 money mistakes I have made 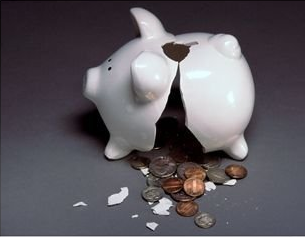 I am not a standard personal finance blogger. Many of my peers only fixed their finances after first running up huge debts or losing their jobs. But I’ve never been in debt and I’ve never claimed a penny in welfare or benefits.

The closest I’ve got to the D-word was in my second year at university, when I borrowed money from a friend between grant cheques to buy a stereo.

In mitigation, I was still using that system a decade later – I bought well – and when I left college I had money in the bank, despite only ever receiving the standard student grant.

(Specifically, I took out a student loan, but only to put the money into a high interest savings account, then arbitraged the difference between the rates!)

Anyway, for me that stereo purchase was my wild moment – the equivalent of a week-long cocaine binge with dwarf waiters, fire-eaters and loose women on stilts. (I presume that’s what debt-fueled decadence looks like?)

Am I perfect then? I wish. I have financial blindspots just like anyone else – but maybe not the same ones.

While I can’t really match other blogs with their confessions of “I replied to a nice email from a gentleman in Nigeria” or “I drank 20 expensive grande triple-lattes a day and then had a heart attack and couldn’t afford the medical bills”, I have done the dumb stuff listed below.

Let us know in the comments below of any unusual ways in which you’ve lost money.

1. I rediscovered shares late (part one)

I used to study share prices on the Teletex TV service at 6.30am every morning before my paper delivery round.

I’d try to guess trends. The next day I’d check to see which shares had risen and which had fallen, and whether I was right.

Not the most advanced trading strategy, but I was 13-years old. If I’d kept it up, a lucrative career as a city broker or money manager might have beckoned.

Instead I grew my hair long and discovered poetry, music and girls, pretty much in that order.

I didn’t rediscover shares properly until my late 20s, by which time Cityboys my age were already burning out and getting divorced. I’d missed my moment.

2. I never bought a house

Probably my single worst call ever.

It would be less painful if I was oblivious to the value of owning your own home, but I wasn’t. I urged friends to buy throughout the mid-90s slump, right up until they nearly all had bought and I was still renting.

Why didn’t I buy? At first I was moving around a lot. Later I was snobbish and wanted a great place for my money. Finally I thought the market was over-valued (which it was, but for years prices went up anyway).

Every time I renew my rental contract, I ponder how much this failure has cost me. I estimate something like £200,000, assuming I’d stayed in just the small two-bed property I almost bought in 1996.

In reality, I’d have traded up and made more.

3. I read too much Jack Kerouac as a teenager

If you want your kids to end up rich, don’t let them read On The Road.

Or else let them read it, but then take them to see some real dropouts. Point out the damp living conditions, the poor hair, the questionable taste in music and the seemingly essential need to pretend none of it is happening via a drug habit. Hopefully they’ll get the picture.

At key points in life, my left-field youth has risen up to stop me doing things that ultimately might have made me money. Buying a boring but sensible house, for instance, or sticking to the fast track in my early career instead of going for freelance freedom.

Arguably I might even have got married by now, which can save on some costs (although it can usher in plenty of others if you’re not careful!)

4. I developed a tropical fish habit

I mean keeping fish as pets, not eating them. And not just any old tropical fish either, but coral reef fish. Corals too, in fact.

Do you know that you can break a bit of coral off a friend’s own specimen, put it in your own aquarium, and watch it grow?

It might sound cheap – like taking cuttings of herbs – and it would be if that aquarium didn’t cost £2,000 to set up first.

And don’t even ask about the price of the fish. Loose women on stilts are cheaper.

5. I never traveled when I was poor

One thing I plan to do when I achieve financial freedom by replacing my salary with investment income is travel the world.

Nothing unusual in that, except to say that I’ve now traveled a fair bit with work and stayed in some truly excellent five-star hotels.

I’m sure dorm rooms in Thailand have a certain charm, but when you’ve been lucky enough to stay in Shutters on the Beach in Santa Monica for three weeks on somebody else’s account, you’re going to have to hold your nose back in a budget bungalow.

Don’t take this too seriously – I don’t, and I’m sure I’ll be okay. But nevertheless, I think I should have done the dollar-a-day thing when I actually only had a dollar-a-day to spend.

Vaguely related, I keep intending to do some travel now, rather than wait until I’m too old or fussy to enjoy it.

This is Tim Ferris’ mini-retirement concept, and it’s a good one.

Unfortunately, I keep getting drawn out of mini-retirement to do one extra bit of work or to simply avoid air travel (which hasn’t been fun since the 1950s – and no, I wasn’t alive to see it!)

Thinking I’m going to travel more than I do costs me, because I buy annual multi-trip travel insurance as a saving and incentive, and then only take the initial trip I bought the coverage for.

I guess it’s the equivalent of the gym membership some people buy with good intentions and poor consequences. But at least they get a sexy membership badge.

7. I started a business with friends

I’ve written before about the risks of starting your own business.

I’ve been self-employed for many years and generally I love it, but starting and running a company with other people is an entirely different affair.

Our company wasn’t 100% successful, and while I theoretically broke even on my investment in it, the opportunity cost was a couple of years worth of salary.

I’d possibly do it again, perhaps, but I’d be damn sure I was doing it for me next time, and I’d run the show.

If you’re going to be paying, you might as well enjoy the ride.

I didn’t invest in the late 1990s, even though I had cash available and there was a raging bull market going on.

Perhaps I was still over-influenced by Jack Kerouac.

Admittedly I might have lost all my money in the dotcom crash. But I like to think I’d have seen the over-valuation that was evident to me even as a non-investor. (High yield dividend paying shares were going cheap even as tech shares boomed, for instance). We shall never know.

The first couple of years of share investing saw me buying and selling shares on a weekly if not a daily basis, and most of the rest of the time I sweated over whether or not to buy or sell even more.

It was a huge waste of money (when I worked out the dealing fees and taxes I’d paid in that first year I felt physically sick) but even worse was the distraction from my proper employment that staring at my portfolio and pondering took up.

I learned the hard way that share trading should be boring.

I’m still losing money because of my fascination with investing, though: I’ll never get rich by writing this blog!

10. I forgot what money was for

A few years ago I lost sight of why I was saving and investing money. I put more money into the markets than I needed to, and spent too much time that I’ll never get back obsessing over different investment possibilities.

Don’t get me wrong – I love investing, shares, and the intellectual thrill of following companies.

But you can become a miser if you’re not careful. Nobody likes a Mr Scrooge. Not even yourself, eventually. Remember, money can’t buy you love.