Why RDR is painful for passive investors

Some of the biggest outcries on Monevator occur when some discount broker or other whacks up the prices it charges DIY investors.

For new passive investors, it must seem bewildering and intimidating, especially if you just want to know how to get the best deal.

So it’s time for a plain English catch-up post that will hopefully explain why this is such an unsettling time for investors who just want a cheap and reliable home for their portfolio.

In the good old days – about 12-months ago – a canny passive investor could pick up index funds without worrying about any costs beyond a sliver of Total Expense Ratio (TER).

Trading fees and account fees were problems for other people, provided you did a modicum of research.

Then along came the Financial Services Authority (FSA) to smash up our party like Eliot Ness busting a bar full of shandy drinkers.

The RDR is meant to end the era of retail investors receiving hookey financial advice.

Previously, the commissions earned by advisors were a secret affair buried in the fund charges. This is known as bundled pricing.

Bundled pricing is essentially a package deal where you pay for a slew of services, whether you need them or not.

If you peeled back the layers of a standard, expensive 1.75% TER fund, you’d see something like this:

With trail commission for advisors banned by the FSA come January 2013 (trail commission can still be paid on products sold before then), the alternative is so-called ‘unbundled pricing’.

It is how ETFs, shares, and investment trusts already work.

In an unbundled world, all the charges are teased apart, so you can see what you are paying, to whom, and for what.

The trail commission and platform fee are stripped out of the TER or Ongoing Charge Figures (OCF) for a fund.

Funds that have done this already are often described as clean share classes.

That means they are ‘unbundled’ versions of existing ‘bundled’ funds. They generally have shrunken TERs, but they aren’t necessarily any cheaper to own because you’ll end up paying a separate platform fee to get them. 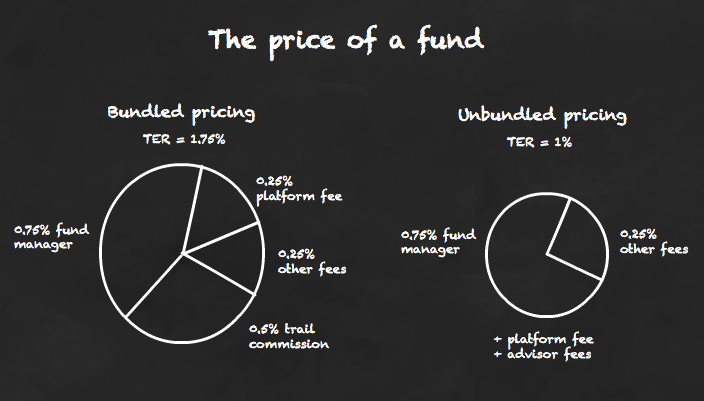 Curiously, the RDR isn’t meant to affect fund platforms. The FSA is poking a stick into their workings, too, but no decision is due for several months at least.

But the platforms can see the way the wind is blowing. They need to cater for ‘clean share classes’ and hidden payments fuel suspicion in a society that’s sick of light touch regulation.

Hence explicit platform fees have arrived, much to the anguish of us canny passive investors who were previously getting a free ride.

Most ‘bundled’ index funds only pay a platform fee of 0.1 – 0.15%. It would seem that brokers serviced these customers at a loss or on minimal margins at best, perhaps on the hope that they could lure them on to the hard stuff later.

Now that broker’s charges are out in the open, it’s impossible for passive investors to continue enjoying a subsidy at the expense of active investors.

Many brokers are still platform fee free because they’ve adopted a ‘wait and see’ approach.

But change will come and I predict our options will shrink like a water hole in the Gobi desert as the hidden payments dry up.

Early passive investors thrived because we understood how the system worked. Like savvy savers who switch their bank accounts, we were too few for the industry to worry about. It was too busy tearing meaty chunks of profit from the bovine majority.

Now the regulator is forcing the industry to worry, and those who hacked the system are the losers. We must hope the RDR is worth it for the greater good.

Next post: Hey buddy, want to buy a conglomerate?