When it comes to collateral damage from the tragedy in Ukraine, investors in Russia can only come near the bottom of the sympathy list.

But Monevator is an investing site. And the tumult in Russian assets since the war began is one for the ages.

Russia’s stock market was kept closed all week. But that didn’t save its key constituents from a furious reckoning of price discovery on foreign exchanges.

As war and its repercussions unfolded, Russian stocks were smashed.

It only got worse from there.

From Russia with Love

Russia’s London-listed stocks had lost almost all of their value by the time [their] suspension was announced on Thursday.

These are giant firms getting roiled.

True, their foreign-listed holdings might be being treated with especially extreme prejudice.

For newly-minted legal and regulatory reasons as well as – for want of better words – moral or PR ones, Russia is now untouchable for many investors.

Norway’s giant sovereign wealth fund has written-down its Russian holdings by more than 90%, for example. The manager warned: “it might be that they are essentially worthless at some point.”

Happen to have some Russian share certificates under your bed? I wouldn’t look forward to an overnight bounce when (if) Moscow reopens. Not unless this invasion ends very soon.

Russia is on the fast-track to Pariah status. (And I’ll say it again: I feel sorry for ordinary powerless Russians getting ruined by a despot).

Already owning companies based in a gangster’s paradise was one thing.

But what if you waited until this week before plunging into massively devalued Russian securities?

(Be greedy when others are fearful, courtesy of Google Translate).

Ethical squeamishness aside, you might argue owning a Russian ETF is ‘option money’ on Putin getting ousted. Preferably by someone more humanity-friendly.

Okay, but then there’s the problem that Russian ETFs went batshit crazy (a technical term) this week.

As reported in the Financial Times [search result]:

However, most Russia-focused ETFs have plunged to sharp discounts, with the $165mn iShares MSCI Russia ETF (ERUS) and iShares MSCI Eastern Europe Capped UCITS ETF (IEER) both closing at discounts of 50-60 per cent to NAV.

The fact the Russian market is closed isn’t as fatal to Russian ETF trading as you might imagine.

ETFs can still act as a means of price discovery during market dislocations.

We saw that in the bond market, for example, during the Covid crash.

High-yield ETFs apparently veered from their ‘known’ value when the market froze. But when it thawed they were roughly right about real underlying value.

However there are extra snags with Russian ETFs.

…owing to the sanctions imposed on many Russian companies after the invasion of Ukraine, the closure of the Moscow stock exchange, capital controls and some ETF issuers’ unwillingness to increase their exposure to Russian securities, many Russia-focused ETFs have halted the creation process and sometimes also the redemption process, causing the arbitrage mechanism to break down.

I am not an expert on ETF plumbing but Dave Nadig is:

Wondering how quickly you can lose money when political risk goes 83.59% against you?

Here’s the London-listed iShares Russian ETF (ticket: CSRU) over the past month: 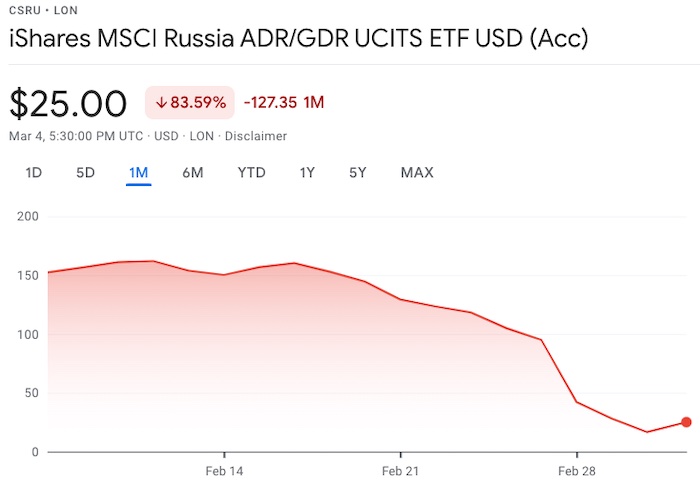 Grim by any stretch. But it’s actually even worse than this!

As per the iShares website, the last recorded NAV1 of CSRU was barely $7. It could be trading at more than three times what its assets are really worth.

Effective March 3, 2022, the Fund has temporarily suspended new creations and redemptions of its shares until further notice […]

Effective March 4, 2022, secondary market trading in the shares of the Fund has been suspended by Deutsche Börse, Euronext and Borsa Italiana.

The Russian stock market was shut for 75 years following the Bolshevik revolution in 1917.

Fair warning to any ambitious long-term investors reading this.

The World is Not Enough

Active and hedge funds with big exposure to Russia have faced all kinds of damage, obviously.

There have been suspensions, too. Here your money is locked into a fund for an unknown period. Outfits as diverse as BNP Paribas to the UK’s Liontrust have suspended trading in Russian funds.

The vast majority of passive investors haven’t done too badly. Emerging market index funds had less than 5% in Russia when this all got going.

Of course losing an entire country overnight is still a nasty hit. And given that MSCI and Dow Jones are now pulling ‘uninvestable’ Russian stocks from their indices, holders of passive funds tracking such indices probably can’t expect a bounce from Russian stocks from any future recovery.

Incidentally, I’ve noted the Freedom Emerging Markets ETF before in Weekend Reading. This ETF tracks an alternative emerging markets index. It screens out the likes of Russia and China.

Unfortunately it’s a US-only product. Maybe that will change now?

As Humble Dollar wrote this week, going without autocrats needn’t be bad for your wealth:

Since inception in May 2019 through February, the fund is up 39%, outperforming Vanguard’s emerging markets index fund, which is up 30%, and iShares Core MSCI Emerging Markets Index Fund (IEMG), up 29%, and it’s even further ahead of the big fundamental-weighted funds mentioned above.

As an active investor I had no exposure to Russia, fortunately, when Putin decided to do the worst retcon in recent history.

However plenty of other stocks have been smashed. Some European banks are down more than 25% on Russian exposure fears. We’ve all taken our lumps I’m sure.

And any of it pales into insignificance compared to Russian missiles raining down on your city. Let alone aggressive taunts concerning nuclear weapons.

Have a safe weekend wherever you are.

Snapshots from the front line of economic warfare – Monevator

Social care funding: how your house, pension, and savings are means-tested – Monevator

US jobs growth surprisingly strong in February, and wages were flat – CNBC 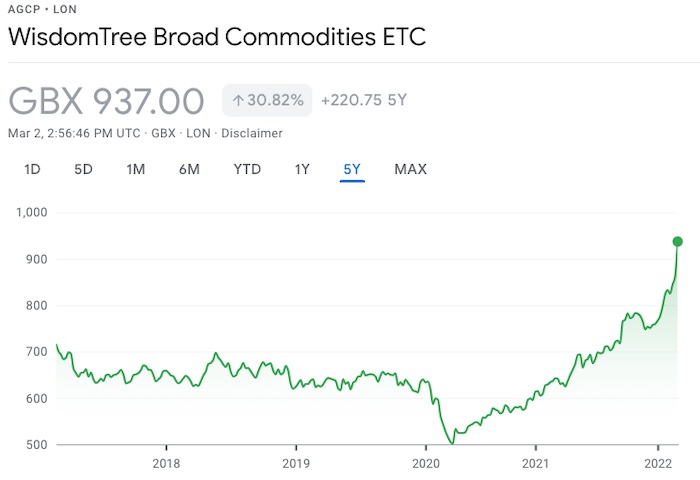 Here’s how to donate to Unicef’s Ukraine campaign – Unicef

The cheapest mortgage rates revealed – Which

Solar panels: a ray of hope as energy bills go through the roof – Guardian

Which BTL landlords were hit hardest by the tax changes? – ThisIsMoney

Safe investing at a time of uncertainty – Portfolio Charts

The next 30 years – Michael Baker

Why diversifying your portfolios is getting harder [US but relevant] – Morningstar

Should talking about money remain the last taboo? – Humble Dollar

The financial realities of death and aging [Podcast] – Standard Deviation

When can I be as rich as Batman? [Fun tool] – When Can I Be Batman?

…and lessons from this latest Berkshire letter – Novel Investor

Ukraine AirBnBs being booked to get money to residents – Guardian

Martin Wolf: the conflict is between tyranny and liberal democracy [Search result] – FT

How the Russian invasion is playing out on Wikipedia… – Slate

…and on Russian TV – BBC

How dangerous was Russia’s attack on a nuclear reactor? – BBC

The Almighty Dollar: Follow the Incredible Journey of a Single Dollar to See How the Global Economy Really Works by Dharshini David – £1.89 on Kindle

Why electric car prices are about to plummet – Sky News

How to get rid of almost everything [Some US detail, but good] – The New Yorker

Long Covid may reawaken interest in EBV, the ‘everybody’ virus – The Atlantic

“Even short commutes stab at your happiness. According to the research, commuting is associated with an increased risk of obesity, insomnia, stress, neck and back pain, high blood pressure, and other stress-related ills such as heart attacks and depression, and even divorce.”
– David Hansson, Remote: Office Not Required

Next post: Our updated guide to help you find the best online broker

Previous post: Social care funding: how your pension, house and savings are means-tested