Sooner or later in any survival drama, half the survivors walk out on the other half in search of a better future.

Sure, they’re all safer together in the camp.

But that also sucks – what with the dull food and the claustrophobia and the love triangles and the sudden deadly nocturnal bloodbaths.

Viewers wince and shout “don’t do it!”

But it’s to no avail.

Stuck in the mid-series doldrums, the screenwriters need these renegades to be chowed down by zombies or vapourised by aliens or to turn on each other, starving and half-mad.

An antihero gets his comeuppance. A fan favourite cops it, too.

Whoever is left limps home, desperate to perpetuate their lucrative Netflix gig for six more seasons – unlike their unfortunate eviscerated comrades who can now only dream of 20 years signing T-shirts at Comic Con.

Lost in the supermarket

Back in the real world and in a Britain today that definitely shares nothing in common with the above scenario, things seem to be mildly unraveling:

I’ll say it again – this is definitely not all happening because of Brexit.

From book shortages in the US to soaring gas prices in Europe, the Containergeddon that’s broken supply chains, and a global shortfall in everything from semiconductors to paint, Humanity PLC is struggling to reboot.

However Britain is especially vulnerable to this disruption – even absent a Brexit – because we’re very exposed to trade.

And what was heroically spun by some as a reason to make such activity difficult with our by-far largest trading partner has now come back to bite us.

As a result our economy – ‘running on fumes’ says Bloomberg – has been slow to bounce back: 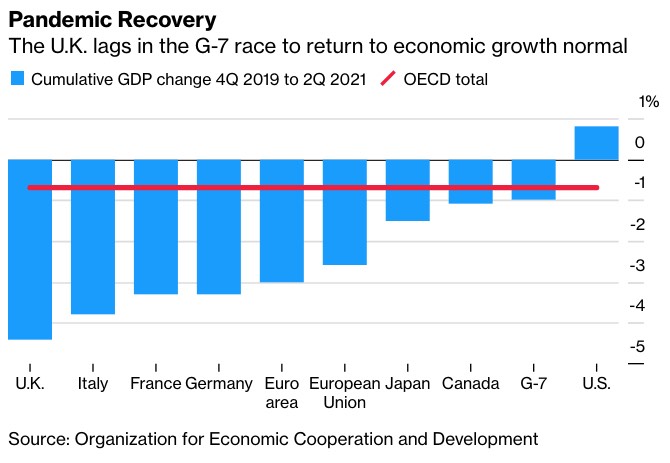 In response, the charismatic blonde survivor who headed our breakaway group has continued his finger-pointing.

Despite nearly every economist in the world warning we’d face consequences from staff shortages if we turned off free movement with Brexit, PM Boris Johnson blames business, this time for perpetuating a low-wage culture.

As the Brexit-tracking professor Chris Grey notes on this shift:

It’s like the three-card Monte scam in reverse: rather than the gullible punter never turning up the winning card, Johnson’s trick is to present whatever card he picks as being the winner.

There was of course no evidence that immigration made more than a tiny difference to the employment prospects of Britons. That was a fiction, like so much other campaign nonsense:

What free movement did do was keep the lorries rolling, the elderly cared for, the Starbucks coffees coming, and the home renovations happening.

What we’re seeing on the High Streets is just the tip of the iceberg:

Remember, most of the economic cost of Brexit won’t be visible in the streets or on the supermarket shelves… A missing programmer. A car component that’s late or dearer. A fintech that’s founded in Berlin instead of London. A permanent drag on growth.

Even if you believe that Brexit will lead to upskilling and a pay boost for Brits, it’s clearly going to take decades.

So you might think the government should come clean and start taking appropriately massive action to redress this problem, given we have now got (slightly) more freedom to act and it can still borrow cheaply.

However besides the blame game and the cheering of fuel shortages, the main talk at this week’s Tory party conference was of tax rises and cutting spending.

Chancellor Rishi Sunak is no idiot, so you might wonder – beyond idealogy – why he’d go down this path at a time of record low borrowing costs.

Why not build new towns to solve Britain’s housing crisis? Why not plant 100,000 hectares of new forests instead of 30,000, to make a dent in our climate pledges?

If this isn’t the time for borrowing to boost the economy then when?

I suspect there are couple of big impediments.

Firstly, as former Bank of England governor Mark Carney warned Britain is reliant on the “kindess of strangers” – the capital inflows that finance our current account deficit.

On top of that Britain’s finances are uniquely emeshed with the world: 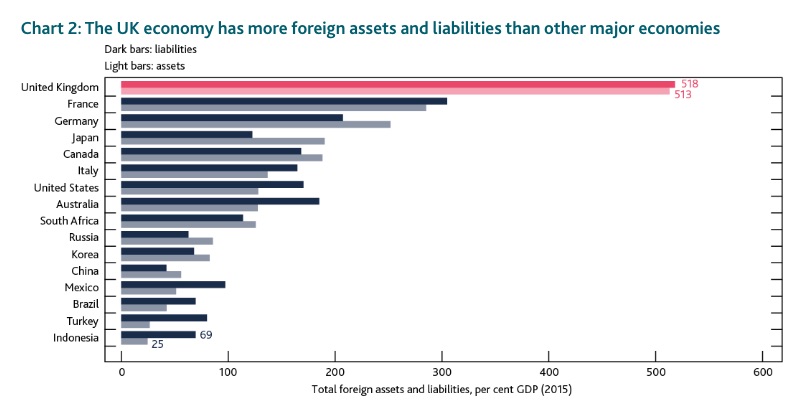 For example, a third of UK corporate borrowing is financed from overseas lenders.

The international perception of the UK’s finances is therefore a priority for any competent UK chanceller. As bad headlines multiply, Sunak can’t risk a credibility gap, a run on the pound, and/or rising borrowing costs.

As Merryn Somerset-Webb puts it in the FT [search result]:

A 2013 study from the World Bank suggests that once government debt goes over 77 per cent of GDP every additional percentage point reduces real annual GDP growth by 0.017 percentage points.

At [the UK’s] 106 per cent that adds up — its effect on living standards might be why Sunak said at his party’s conference this week that he considers the ongoing piling up of debt to be “immoral”. All this suggests more taxation.

Whatever the Brexit rhetoric, we’re not totally in control here. Sunak has to at least talk tough – and arguably act tough – to keep foreign capital on-side.

That’s surely one reason why the government is mooting tax hikes, even with GDP in the hole and the cost of borrowing for investment neglible.

The second reasonable reason the government may be reluctant to embark on the kind of massive infrastructure spending spree I’d like to see at a time of record affordability is that it simply can’t be done.

It’s hardly treasonous to say we had a problem building more homes (a massive shortfall for decades) or infrastructure (Crossrail is years late) even before the pandemic and Brexit.

Now we’re short of workers, who exactly will build the new towns? The new infrastructure?

I still believe my ginormous tree-planting idea has legs. If anything requires low skills it’s digging a hole, it’d boost the economy, and it needs to be done.

But this sort of thing won’t level-up the workforce long-term.

Perhaps Sunak’s wonks have run the numbers and told him that without workers he can’t productively spend the money, even if he wants to?

I’m often reminded by critics that Monevator is an investing site – as if the nation’s economy was as inconsequential for us as the football results.

But fair enough, what could this mean for our finances and portfolios?

Firstly, Britain is not finished. Those who were opposed to our leaving the EU are foolish in predicting a collapse.

As I’ve said since day one, Brexit is more like a leaky tyre from a puncture than a headlong crash into the barriers. The pandemic added bumps in the road, but we’re still a strong, well-educated economy.

The UK will do worse economically indefinitely because we left the EU – something you might legitimately feel that was worth it for other reasons. But we won’t become an economic basket case.

Rather, I believe we face mild stagflationary forces – although not enduring stagflation, and I’m not (yet) predicting a recession.

Inflation will rise for a time, because it is rising everywhere. It may then persist for years here because of the higher cost of workers. The Bank of England’s new chief economist recently said as much. His underlings predict CPI inflation will hit 4% later this year.

But faced with low economic growth, the Bank will surely be reluctant to raise borrowing costs too fast.

This may be where Sunak’s steathy tax rises will instead step-in to remove some money from the economy to curb inflation – hopefully in a vaguely progressive fashion.

Tax rises can be expected to hurt economic growth at the margin, but may be judged better than the alternative (an international confidence scare).

The usual caveats apply. This is just my best guess, for what it’s worth. It’s definitely subject to revision with new data.

Things may go better than expected. For example, the removal of furlough hasn’t yet done the damage some predicted.

I do hope we get a few more breaks. We’re overdue them.

From the archive-ator: How it feels to be mortgage-free – Monevator

In need of modernisation? The UK’s housing crisis close-up – BBC 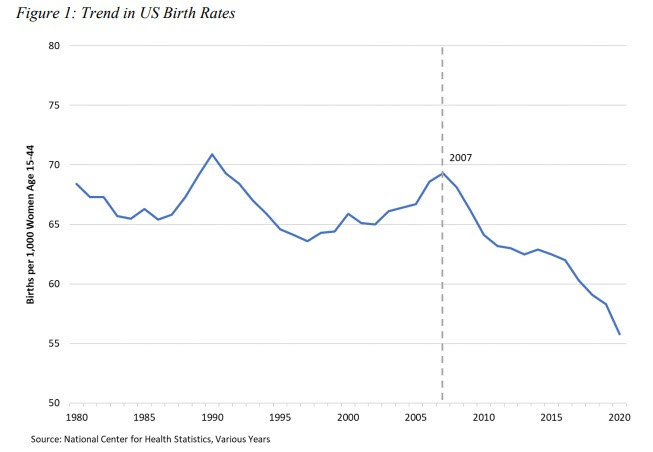 Which travel insurer offers the best Covid cover? – Which

The fractionalization of everything – Vox

Pluto is a planet – The Belle Curve

Are we craving risk or losing reward? – Of Dollars and Data

Four ways to keep more of your funds’ returns – Morningstar

What is your investing edge? – Behavioural Investment

How does the quality factor work? [Nerdy] – Verdad

Base rate are a challenge when forecasting growth – Intrinsic Investing

Be challenged, not overwhelmed – More To That

Give yourself permission to dial back – Harvard Business Review

What drove the US media’s extra-negative Covid coverage? – Freakonomics

Quit like a Millionaire by Kirsty Shen and Bryce Leung – £0.99 on Kindle

The Snowball: Warren Buffett and the Business of Life by Alice Schroeder – £3.89 on Kindle

Can nuclear fusion put the brakes on climate change? – The New Yorker

Four steps to add sustainable investing to your portfolio – Morningstar

We throw out too many clothes. Poor countries are left with the waste – Vox

Can we move forests in time to save them? – Mother Jones

“Put on the diamonds” – Harpers

“The fact that a thesis is flawed does not mean that we should not invest in it as long as other people believe in it and there is a large group of people left to be convinced. .”
– George Soros, The Alchemy of Finance

Like these links? Subscribe to get them every Friday! Note this article includes affiliate links, such as from Amazon and Freetrade. We may be compensated if you pursue these offers, but that will not affect the price you pay.