Weekend reading: Me and you versus the world

Lots of amateur investors daydream about being the next great stock picker – a contrary-minded Buffett for the 21st Century.

And that just isn’t going to cut it over the four or five decades of a lifetime of buccaneering investing.

As Patrick O’Shaughnessy of Millennial Invest wrote this week in a piece on the virtues of cheap yet scary-looking companies:

To buy into a terrifying portfolio, you need to have a contrary mindset.

This mindset is almost sociopathic, because it requires not just ignoring the crowd, but actively trading against it.

Most people can’t do that. They run with a herd even when they think they’re standing apart from it.

That’s surely for the best, given that more than seven billion of us are trying to get along on this little planet.

Gold given the finger

The wannabees come and go.

Remember when any mention of gold brought out dozens of precious metal bugs to call you an idiot, no matter what you wrote?

For all the noise they mostly seemed to think the same thing – that the dollar was about to collapse, and that a Neo-Aztec Kingdom of Gold was set to emerge from spare bedrooms and basement PC dens across the land. Conspiracy theorists who’d buried Krugerrands under their lawns would inherit the earth.

Who knows, things are precarious enough that even I wouldn’t write off the gold bugs’ predictions entirely. But one thing I’m sure of is that the love-in for gold a few years back was as contrary as feeling a bit sad when Robin Williams died.

Look at this graph of the assets amassed at the height of gold mania by the US gold tracking ETF – ticker GLD – as posted by Ben Carlson on A Wealth of Common Sense: 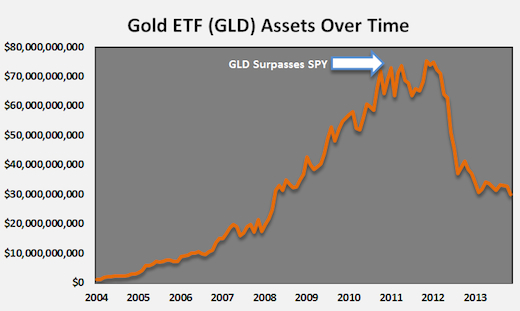 At that peak in summer 2011, GLD became the largest single ETF in terms of assets – bigger than even the mightiest S&P 500 tracker.

But since then, Ben says:

…the fair-weather gold investors have been shaken out, and then some, in the latest drawdown.

Although the GLD fund’s performance is down by a quarter, the total assets invested in GLD are down by 60%.

In other words, GLD’s assets have shrunken far, far faster than the gold price.

Meanwhile the SPY stock market index tracker has returned 60% in gains, and it’s doubled in terms of assets.

This isn’t a post to say that stocks will always beat precious metals, or that you should race out and buy the S&P 500.

(If anything it makes me want to trickle money into a gold ETF!)

It’s more a reminder that like teenage goths who feel they’re uniquely dark snowflakes but all seem to shop at the same branch of Emos ‘R’ Us when you see them outside a Marilyn Manson concert, so any investor who has gone off the beaten-track mob-handed is likely not blazing a trail but heading for a cliff.

This stuff is hard, for all of us.

Yet another reason for most to be passive investors and opt out of the guessing game entirely.

Product of the week: Do you have a spare 30% kicking about for a deposit on your new home? Then Nationwide has the 3.49% charging 10-year fixed rate mortgage for you, reports ThisIsMoney.

, by the former US Treasury Secretary Tim Geithner. True, it’s riddled with passive aggressive score settling, but this laconic bitchiness is part of its charm. I think it’s also more educational to revisit the crisis with a few years’ perspective.

Next post: How to invest in the low volatility premium