I stuck my oar into a Twitter debate this week, after economist Julian Jessop produced a graph purporting to show that the UK has not grown much more unequal post-Thatcher: 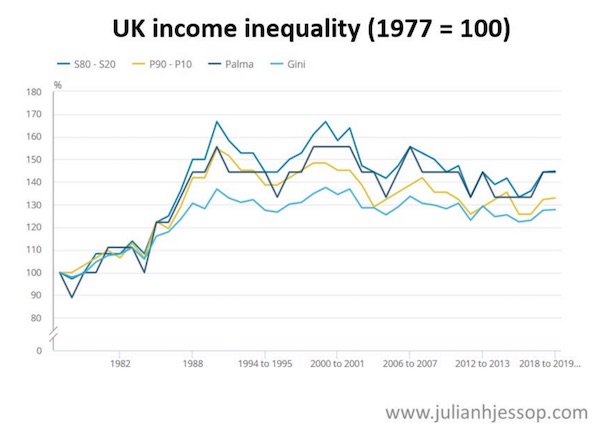 I responded that if we assume the data is right, then it’s still interesting that things don’t feel that way. So why the disconnect?

I am sure one reason is house prices. Those who have been on the housing ladder for decades – especially those who can help their own kids on – don’t seem to understand how un-affordable prices for the young have fractured society.

Perhaps that doesn’t show up in overall statistics of inequality because older would-be poorer citizens were made richer by rising house prices? I don’t know.

The other reason I put forward was Instagram. The fabulous lives of celebrities, influencers, and the several thousand photogenic cats and dogs made famous by social media cast a pall over our realities.

In the old days the Jones’ lived next-door, or perhaps across the street. Now they’re in your pocket, for many people day and night.

It all points to new, technology-enabled (or perhaps enfeebled) ways of feeling rich or poor, which reminded me of an excellent blog post by US writer Morgan Housel.

Commenting on how the super-rich can’t help but make even the ordinarily rich feel poor, Housel writes:

Past a certain income the most difficult financial skill is getting the goalpost to stop moving.

And today’s level of global wealth has moved it a town over.

Housel then proposed a new spectrum of financial wealth, described by words, not numbers – because numbers don’t seem to tell us the whole story anymore.

While there are categories on the list I’d feel prouder to belong to, I plumped for ‘Health Wealth’ as my current status:

You can go to bed and wake up when you want to. You have time to exercise, eat well, learn, think slowly, and clear your calendar when you want it to be clear.

…which is gratifying, because I’ve been reading Why We Sleep? by Matthew Walker, and it’s life-changing enough to have seen me buy some new blackout curtains!

Where would you place yourself on Housel’s spectrum? And are there any categories he’s missing?

p.s. Monevator has been ranked as the #1 UK personal finance blog by Vuelio. Several other good blogs on that list, too.

By Brexit standards, the debate after last week’s post is worth reading for views from all sides – Monevator

From the archive-ator: Types of entrepreneurs – Monevator 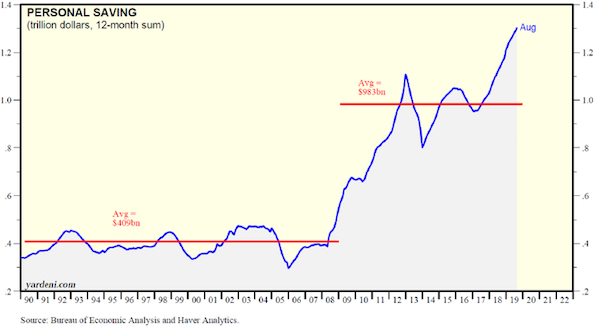 Record US personal savings of $1.3trillion are one reason why the US bull market can continue – Investing Caffeine

Vanguard vs Dimensional: Who has delivered the higher returns? – Evidence-based Investor

Plugging into the cost of charging an electric car – Guardian

How to spend your money, according to science – Big Think

Bitcoin is a game – Moneyness

Why are we being herded into buying part of the world’s biggest polluter? – Patrick Collinson

Ergodicity [From 2018, but well worth reading for the counter-intuitive maths] – Sid Shanker

What went wrong at Woodford [Video] – Stockopedia via YouTube

Treat each fight as if it were your last, because if you don’t it could be – Klement on Investing

Brexit and the General Election

Radical Candor: How to Get What You Want by Saying What You Mean by Kim Scott – £0.99 on Kindle

RESET: How to Restart Your Life and Get F.U. Money by David Sawyer – £0.99 on Kindle

Way of the Wolf by Jordan Belfort [aka The Wolf of Wall Street] – £0.99 on Kindle

Experience: My face became a meme and I turned it into a career – Guardian

Biology is eating the world: A manifesto – Andreessen Horowitz

The four stages of Fintech start-ups – The Basis Point

Any amount of running reduces the risk of early death, study finds – Guardian

“Budgeting is about telling each pound that comes through your hands where it should go, and how it should be used. In other words, budgeting is forward-looking. It’s about deploying your resources in the best way possible, like an army general planning the deployment of troops”
– Pete Matthew, The Meaningful Money Handbook

Next post: Asset allocation strategy – what we can learn from rules of thumb