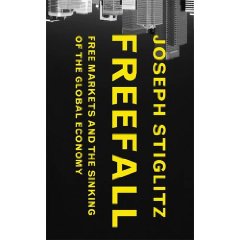 Last night I saw rock star economist Joseph Stiglitz pimp his new book give a lecture at the London School of Economics.

When I say Stiglitz is a ‘rock star’, I refer not only to his 2001 Nobel Prize, his stint as chief economist at the World Bank, or his string of professorships including his current gig at Columbia University.

There is also knuckle-dusting rivalry here to rival The Stones Vs The Beatles.

Stiglitz is loving the fall from glory of the ultra-free market economists who held sway in the 1980s and 1990s, and he has only scorn for former Fed Chairman Alan Greenspan.

All good fun, but the bad news, if you believe him, is the Western world is still in a truly terrible state.

Economists are not the only fruitcakes

Stiglitz’s beef with his fellow economists is they provided an intellectual underpinning to the idea that properly free markets were always efficient, rational, and self-correcting (despite evidence that if they were so perfect, our world would look different).

Their theories in turn enabled policymakers in the US and Europe to do away with the regulation that Stiglitz believes protected us between World War 2 and the 1980s.

I broadly agree. Financial crashes and crisis were common in the pre-Depression years, and Stiglitz highlighted how they’ve become common again since the deregulation of the 1980s.

Stiglitz argues that the behaviour of banks and other financial companies that led to the credit crisis gives lie to the idea that the greed of bankers and others inevitably leads – without regulation – to a positive outcome.

“The reason that Adam Smith’s invisible hand seemed to be invisible is because it was not there!” he quipped.

The crisis revealed a catalogue of stupidities, Stiglitz said.

It turned out they hadn’t.

“The reason that MBS were innovative was that they were stupid,” Stiglitz said, arguing previous generations had more common sense. (See this video about the credit crisis for more information).

As for Alan Greenspan, Stiglitz was scathing about how Greenspan urged people onto variable mortgages at a time of historically low rates.

You didn’t need a Phd in economics to guess.

You also didn’t need to be a genius to have made big money as a banker in the past few years – you just needed to take big risks.

Stiglitz pointed out that incentives for bankers were completely flawed because these supposed financial masters didn’t even distinguish between alpha – the performance added – and beta – the market return – when doling out bonuses.

Since it’s very hard to generate alpha, any self-respecting banker who had nothing to lose but his job went for beta, by greatly increasing the risk he took on behalf of the bank.

Stiglitz joked that for a while he was worried the crucial theory of incentives might need to be re-written, until the crash proved that conventional economics was right all along.

As for today’s bonuses, he used the same argument I have – that you or I could make billions borrowing billions at today’s near-0% emergency rates.

Nobody should be getting rich on this, least of all the financiers who created this mess. (Stiglitz claims the $180 billion bailout bill for AIG alone could have paid for US aid to Africa for 25 years).

Stiglitz argues for the usual radical reforms – on transparency, incentives, structural reforms and risk-taking – and supports the Volker plan in the US.

But he is sceptical anything meaningful will come to pass unless individual countries move quickly.

Banks are paying lip service to the idea of global regulation, he says, since they know it will stall more regulation for years, and that they’ll be free to make billions in the meantime.

Stiglitz is very gloomy about the financial health of the US, although ironically it helps his day job.

“Economists like a sick patient – the sicker the patient, the better,” he admitted, saying it gives more insights into the ‘pathology’ infecting the economy.

He sees symptoms of sickness everywhere:

On a brighter note, Stiglitz doesn’t seem too bothered about government deficits.

He argues, for instance, that Europe should bailout Greece immediately, to see off the ‘attacks’ from the financial markets, which he speaks about as if they consist of one man and his hedge fund, selling the world down the river.

Stiglitz covered a lot of topics – including a jokey diversion into how Asian economies were saving loads of cash because they learned what happened when they didn’t from the crash of 1997-98, as well learning first-hand the flaws of the tough policies their Western doctors proscribed, such as not bailing out their banks (policies we ourselves ignored with our own crisis).

To be honest, it was too much – as if he was reading the chapter summaries of Freefall, rather than going deeper on one theme.

Stiglitz is certainly an engagingly ‘matey’ speaker, and his diagnosis of the credit crisis’s origins is convincing. He made a strong case for financial regulation.

But in terms of the current state of the economy and the recovery, I was less convinced.

I think the economy is booming again (albeit it with long-term headwinds) and that sets me against his doom-mongering.

More importantly, it seems that now the free marketeers have been sidelined, the more Statist economists like Stiglitz think all their arguments are won.

His suggestion that banks should be lending to developing countries and supporting green technologies reminded me of Harvard professor Dani Rodrik’s lecture at the same institution six months ago on ‘Capitalism 3.0’ – another call to change the world on the back of the crash.

Sure, it would be great to save the world, except I see no evidence that banks can do it. Banks would probably just destroy value in a new wave of risk-taking.

Rather than somehow being reinvented as world saviours, I think deposit taking banks should instead be regulated into making few if any trading bets for themselves, and instead be focused on risk mitigation and transactions.

Stiglitz also annoyed me with his claim that the recovery we’ve seen so far is due to stimulus – but that it hasn’t been a big enough recovery in the US yet because Obama’s stimulus was too small.

I agree a little Keynesian counter-cyclical investment in a recession is a tonic, but not at all that crash and recovery is down to the dictate of governments.

Economic cycles go up and down in capitalist societies – ultimately regardless of political meddling.

The US economy is growing at a speedy annualised rate of 5.7%, based on the past quarter. Unemployment is a lagging indicator, and as for housing we saw here in the UK in the mid-1990s that it took years of growth before prices returned to pre-crash levels. Low house prices didn’t stop that GDP growth.

Left-leaning economists have won the case for heavier regulation of the banks and the reduction of their excessive profits (40% of US GDP before the crash, according to Stiglitz – all since gone in the aftermath, which makes you wonder what is GDP really worth as a measure of useful productivity?)

I do not think though that leftist economists have proved we should go down some socialist state-directed path for the whole economy. That is one argument that had been rightly demolished by the 1980s – and with a lot more pain along the way for citizens labouring under such regimes than we’ve suffered from the credit crisis.

For more Joseph Stiglitz, read his book Freefall, which is available from Amazon in the US

and in the UK