Reminder to Lloyds: If a government tries to sell you a bank, you say No 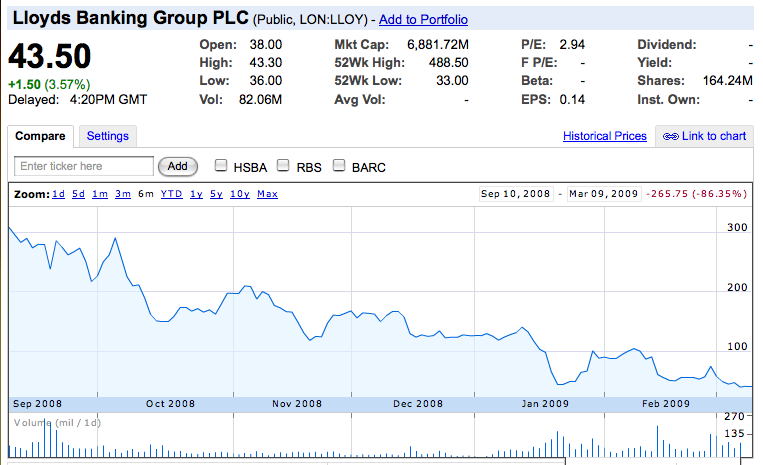 Lloyds shares face a steep climb back, even (or because of) with government help

Today Lloyds Banking Group ceded control to the UK government in return for UK taxpayers insuring £260 billion of toxic loans it acquired via its government-brokered merger with HBOS.

The UK government’s stake has jumped from 45% to 65% under the terms. Lloyds has also agreed with its new owners that it will lend an additional £28 billion over the next two years.

It’s a sorry turn of events for an institution that can trace its roots back 250 years, and which was once rightly regarded as one of the UK’s safest – and most boring – stock market investments.

This was a bank which paid a reliable 8-10% dividend for years, ignoring calls for the payout to be scrapped and the money reinvested in proprietary operations or other ill-fated wheezes dreamed up by Wall Street during the boom years.

I myself held Lloyds shares specifically because I judged no CEO would want to be the first man to cut its dividend in more than two centuries.

And I was right – up until the government made it an offer it probably couldn’t refuse in the shape of HBOS, the UK’s largest mortgage lender.

Lloyds’ CEO Eric Daniels last month admitted to MPs that he hadn’t done as much due diligence on HBOS prior as he’d have liked.

Too right. More than 80% of the toxic loans the government is insuring, according to The Guardian newspaper today, come from the HBOS side of the business.

If it hadn’t merged with HBOS, it’s unlikely Lloyds would have had to go to the government. It might even have still been paying that dividend.

Lloyds bank and me

I first bought Lloyds TSB shares in 2004. I watched them rise from £4 to £6 before seeing them crash down and selling out at £2.09 on November 5th 2008 as it looked increasingly likely the merger with HBOS would be bad for Lloyds’ shareholders.

But hold the champagne: I had topped up on Lloyds shares as the price fell on the merger news.

Worse, I put the Lloyds money into more banks – HSBC and Standard Chartered – which have subsequently fallen too, though not half as badly as Lloyds.

Indeed, I’d rate myself a C-minus rather than a D grade – because as I write, Lloyds shares are now worth just 40 pence each.

No wonder shares in Barclays, the still-privately owned UK bank hanging on after a grim 2008, are now down to 60 pence.

As I wrote back in late January 2009, UK bank shares are being driven by fear, and that fear should certainly extend to the grim hand of a government ‘bailout’.

It’s the height of irony, if you’re a UK shareholder, to now hear complaints about how the UK government has ‘rescued’ UK banks, as if we’re all sitting eating caviar and deciding which Northern town of we’ll buy up for our next estate.

Sure, a few fatcats like former RBS CEO Sir Fred Goodwin have managed to slip away with millions.

But the average shareholder in Lloyds, Barclays, and RBS has seen their shareholdings fall to as little as a tenth of its peak value (or worse). And that includes every citizen with a pension linked to the UK stockmarket.

That isn’t to say I don’t think the government is doing broadly the right thing (whatever my qualms about the murky quantitative easing policy).

But I do think more humility and accountability is in order.

A few months ago Gordon Brown – a man for whom the word ‘hubris’ could have been invented – accidentally claimed he’d saved the world.

He hasn’t even saved the banks yet. And he certainly hasn’t saved the fortunes of shareholders and pensioners who were put money into these companies, only to endure the insult of seeing their investments kicked about as a political football, on top of financial injury.

Lloyds’ CEO Eric Daniels and Chairman Sir Victor Blank must either go, or spell out exactly what was said by the government that made them think merging with HBOS would be a good deal.

As for Gordon Brown, our unelected Prime Minister should stop calling for more state bailouts from other countries and accountability from the private sector, and instead call a General Election.

As the mighty Lloyds crumbles, his own legacy is looking dodgier by the day.