How passive investing is improving your mental toughness

The behavioural finance gurus tell us we’re a bunch of weak-willed monkey brains who chase performance like the world’s tastiest banana. We look in the mirror and see King Kong, rather than a PG Tips chimp in a nappy. We have a great time at the watering hole and think the future will always be lush, forgetting the drought of five years ago.

In short, we’re excitable apes, swinging from mood to mood like our ancestors swung from branch to branch.

And I admit I can see all that in myself.

However amid the daily bombard of advice for puny humans, I do wonder if we forget how far we’ve come.

Undertaking and sticking to a passive investing strategy is a huge self-improvement venture, for example.

You’re not building muscles, but you are building a financial exo-skeleton that will see you punch a hole through the walls of your old life and into the wild yonder.

Or maybe we’re building an ocean-going escape raft. Lashing together our savings so we can get off this overgrazed continent and row over the horizon to the land of financial independence (FI). 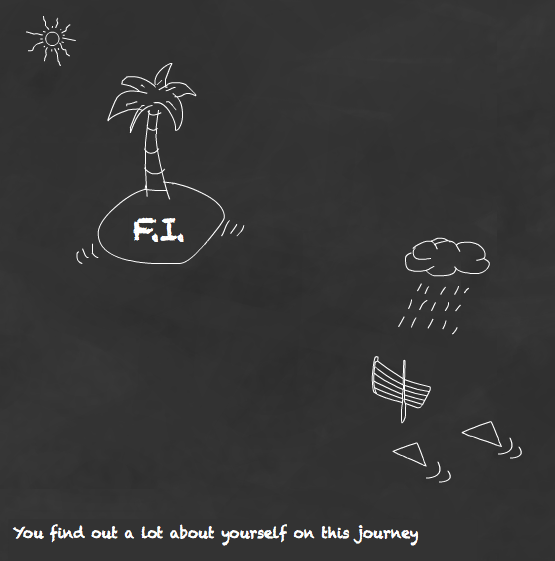 A voyage of self-discovery

The determination to stay the course no matter how turbulent the seas. You may be adrift or lost or seemingly sinking, but you cast aside doubt – the mental image of FI island and an “aloha” greeting keeping you going.

The discipline to stick with the strategy. Save, buy, hold, rebalance. This is the drumbeat that rows your boat across the uncertain ocean. It’s dull. Your mind screams for an end to the monotony. Willpower must be the galley master to instinct.

The fortitude to resist the siren song of instant gratification. This is particularly true if you’re living on restricted rations. It would be so easy to beach yourself on some sandy reef. Break out the rum, party with the natives, and ignore that smoking caldera and the giant pot that everyone’s so excited about. Hot tub anyone?

The resolve of self-reliance. You increasingly realise that you can fix, patch, or workaround any problems that you face. The comforts and status symbols of your old life fade in significance. You find new pleasure in simple things and in a grander narrative of discovery.

It’s a lonely journey at times. It’s not something that many other people want to talk about. Often because they worry about being judged: either because they’re doing nothing to help themselves or because they’re too concerned with the size of their boat.

So it’s hard to get positive reinforcement that you’re doing the right thing – except through communities like the one here at Monevator.

And that’s what I want to acknowledge. Whether you’re a young 20-something who’s making an early start; or a 30-something who’s late on board but throwing everything at it; or a weather-beaten 60-something about to make landfall: you’re doing something tough.

You’re building or have built up large reserves of willpower. You’re forging good habits that are transferable to other parts of your life, like work and health.

And you’re doing it in the face of the general scepticism, ignorance, and dismay of the wider community.

You’re sticking to the strategy even when it’s a slog. You’re resisting the desire for instant results to build something enduring that will only reward you many years from now.

You’re determined. You’re committed. You won’t give up.

Previous post: Weekend reading: Can you withdraw as much from your pension as you plan to?