Lose 6% and you lose your job 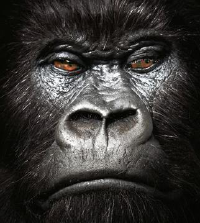 When you’ve got ridiculous amounts of money, the usual rules of wealth go out of the Georgian windows.

If hedge fund manager Michael Platt wants to buy himself a waxwork gorilla nailed to a wooden cross, who am I to argue? I suspect the Micawber principle still applies.

Platt, 41, is the co-founder of BlueCrest Capital Management, a London-based hedge fund group with over $16 billion under management. Its main fund rose 41% and earned over $400 million in fees in the year to October 2009.

Hardly monkey business – and it turns out Platt’s gorilla is just a sideline in sponsoring young British artists, in this case an imaginative chap called Paul Fryer.

Platt’s looking for a profit, of course. To the same end he also has a Fiat painted by British artist Damien Hirst sitting in a garage. Who doesn’t?!

Yet to me, the most striking thing about Platt isn’t the bonkers BritArt or the billions under management, but rather a very tiny thing indeed.

Platt claims he’s never seen a 3% drawdown in his own trading portfolio.

Moreover, if his traders suffer such a decline, they’d best look out:

If a [BlueCrest] trader loses 3 percent of the money he has under management, the firm will cut his capital allocation in half. If the trader’s portfolio then drops another 3 percent, he loses his allocation.

Risk managers will then […] decide whether to recapitalize him. If not, he’s out.

Anyone who saw their portfolio down 30% or more during the bear market might be amazed at losses of 6% being grounds for dismissal.

What is Platt doing, and can we have some of it, too?

Hedging the case for hedge funds

The short answer is yes, it’s perfectly possible for us to use some of the techniques employed by hedge and absolute return funds to minimize our losses.

The long answer is more complicated.

First, the hedge fund gains might not be sustainable.

Hedge funds have a habit of blowing up. Every year the media discovers some manager with a strategy that’s worked for five years, then moves on to someone else when it stops working and the fund is wound down.

I’m not saying that’s the case with Platt’s company, which seems to have irons in every fire – and I’ve no deep knowledge of his business, anyway – but you only have to Google the sorry fate of hedge funds in the bear market to find plenty of examples of trend-following funds that ran off a cliff, or funds whose excess returns were based on over-borrowing in the good times like some ingénue Buy-To-Let investor.

Secondly, Platt has teams of Phds constructing and tweaking models based on tiny movements in the markets. One aim might be to anticipate what even bigger hedge funds are doing, dart in to buy assets before these competitors push the price up, and then nip out again at a profit.

Clever, but it has about as much to do with conventional investing as a night at the Hilton does with kipping on my sofa.

A £1 billion hedge fund that returns on average 8% and never has a down year will soon turn its founders into millionaires.

In contrast, if you’re a private investor with £10,200 in an ISA, it’ll take you nine years to even double your money at 8%. Taking fees from managing money is where the real returns are!

Finally, hedge funds churn assets with even more gusto than Pamplona’s washing machines deal with the aftermath of a bull run.

While I do trade some shares myself (instead of putting all my money in index trackers as I really should) I’m not a day trader. I find it fascinating, I’ve got an open mind about it – I’m even reading a fun-sized book about how to make money trading

right now – but I’ve no reason to think day trading would make me richer.

As such, I’m not convinced that everything hedge funds do has a place in my own investing.

Still, if you salivate over Platt’s 3% maximum drawdown and want to achieve something similar, read my article on how to run your portfolio like a hedge fund.

Next post: Weekend reading: Happiness is a ton of great blog links