Weekend reading: Is it a good time to invest in shares?

However you slice it, investing involves risk. That’s true whether you’re buying shares in a tiny mining company operating in Venezuela or investing monthly into a global index fund.

Certainly, the risks are not the same.

But both involve some risk, in the same way that me and George Clooney are both attractive to women.

Technically that’s true, and it would be true for any man – better than technically, in a good light, with the right lady, on the right day.

But if you were going to place a bet, George would win (nearly) every time.

Similarly, investing via funds instead of individual stocks spreads and reduces your risks, but it doesn’t do away with risk entirely.

With index funds, massive horizontal diversification largely insulates you from the risk of a particular company going bust.

But only vertical diversification (spreading your wealth between asset classes) can help to offset the risk of a disaster in the entire asset class.

Every so often a reader will leave a comment on Monevator that includes something along the lines of “…my 30-year plan is based around the 5.3436% real return I’ll get from equities and…”

This is spurious precision.

It’s great to have a financial plan – vital for most people. And a plan needs to be fed by numbers, which for investors means expected returns.

These expected returns may be derived from what we’ve seen in the past or calculated from some predictions about the future.

But they are best guesses. Nobody is owed their expected return (and all investments can fail you.)

To some extent this is pedantry on my part, of the sort that occasionally infuriates my co-blogger, The Accumulator.

People are confused and scared enough about investing, he says, on discovering I’ve shoehorned another “probably”, “hopefully”, “likely”, or “if the gods are kind to us and we sacrifice the right chickens” into his copy.

But for me investing is all about understanding you’re working with your best guesses, not from a rulebook with the precision of a German train table.

He knows that, of course. You know that, too. And at the end of the day, my complaints might well be pedantic because when somebody asks me if they should invest in shares for their old-age, the first thing I do is point out the superior expected long-term returns (which I put a hoped-for number on) and the second thing I do is direct them to the great long-term returns from the past.

However after doing all that, I invariably then pin them to the wall and splutter crazily in their face like an Old Testament prophet about how nothing is guaranteed in this Earthly realm expect death and changes to taxes with every Budget from George Osborne.

The truth is much of what we take for granted in sensible investing – the need to diversify, the long-term time horizons, the benefits of low cost tracker funds – are at their heart founded on uncertainty, not its opposite.

We should never forget that.

A poor 50 years for shares

Even the past is an unreliable teacher, as two different articles looking at US returns demonstrated this week.

The first, from Bill Barker at The Motley Fool, pointed out that for all the ceaseless talk of an over-valued stock market, returns have actually tailed off in recent decades.

I was born in the middle of 1965. A full 50 years have passed since then. That’s been enough time for me to get married, have three children, and sprout some gray hairs.

But it’s also enough time, I think, to consider whether it’s been a decent time to be invested.

That’s 102 times your money. That sounds outrageously good. But was it?

The past 50 years’ stock returns, on the whole, haven’t quite been up to snuff compared with either the longer-term historical averages or the 50 years that immediately preceded that half-century.

That’s interesting, I think, considering that many people would describe the past 50 years as the coming of age of global capitalism.

Why were returns lower? There are likely many reasons. The US started the 20th Century as pretty much an emerging market, for example, which suggests higher returns. The growing popularity of share investing over the century likely did pull down the returns compared to its earlier, wilder days.

And then there’s the possibility that the US market has actually done more badly than might have been expected in recent decades.

Perhaps we’re due a huge boom – it seems counter-intuitive for all the talk of bubbles and over-valuation, but the stupendous returns from bonds over the past 30 years does hint to me that we might be approaching some sort of reversal of fortunes.

A great 30 years for shares

Another massive reason for Barker’s weaker returns – a reason you should always consider when faced with such volatile data – is simply that the starting and ending points for that 50-year were particularly unfavourable for equities.

Looking at the other article I mentioned, this time from Bloomberg, brings this point home.

Bloomberg highlights a new McKinsey study that considers just the past 30 years for US equities, which the consultants call a “Golden Era” of inflation-adjusted returns.

True, they’re looking at bonds as well as equities. But still it’s interesting to consider that you could have a completely different frame of mind about how your investments will likely fair in the future depending on which article you happened to skim through over your toast.

McKinsey points to falling interest rates and the taming of inflation over the past three decades as reasons why investors did so well in the period. It thinks these could now reverse. 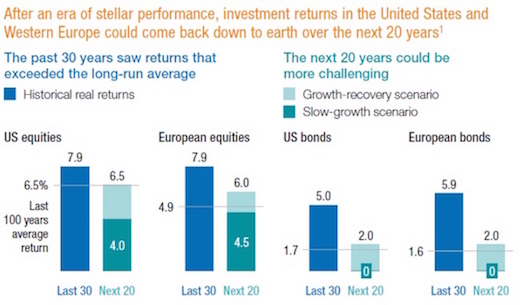 Lower your expectations, says the group:

“We’ve had a wonderful 30-year period in terms of returns, way more than the 100-year average,” said Richard Dobbs, a McKinsey director in London.

“That era is coming to an end.”

He may well be right. He’s much too certain.

A strong 10 years ahead for emerging market shares?

Who really knows how the next 20 to 30 years are going to play out for the world, let alone for investors.

When I think about the pace of technological change, the way a company like Facebook can grow from nothing to over $300 billion in a little over a decade and capture the attention of a billion people a day, the coming era of robotics and AI, the likelihood of ecosystems collapsing, and what will happen if and when inflation returns to the Western world, I think it’s foolish to be adamant.

I’d happily use the McKinsey study as a well-researched guide to the future.

I wouldn’t bet my life on it being right.

Coincidentally, there’s research in The Telegraph this weekend that tries to predict future returns from factors such as credit availability and demographics, rather than from past returns.

Fund manager Barings has been crunching the numbers like this since 2003, which means it’s now getting itself a track record. A superficial eyeballing of the accuracy of its past predictions is quite impressive, especially considering that the cataclysm of the financial crisis in the mix.

Here’s what Barings predicts in terms of asset class returns for the next 10 years: 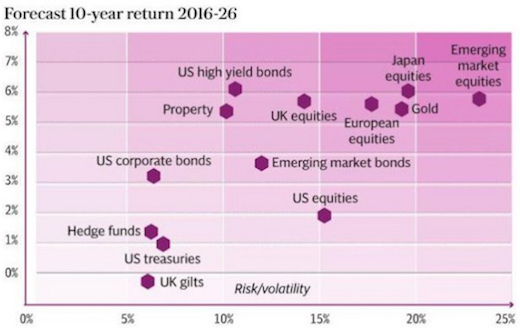 For the two cents it’s worth, this spread of returns does roughly accord with my own view of the world right now (and it makes me regret selling my high-yield bonds after a three-month pop in my active portfolio…)

But remember that most methods of forecasting returns have previously proven to be useless over the long-term. Barings might be having a good run, but it seems unlikely to have cracked the code.

All this uncertainty doesn’t mean you shouldn’t have a well-planned approach to investing.

It means, rather, that you should definitely have a well-planned approach to investing.

For nearly everyone, attempting to precisely predict returns or to dodge stock market crashes based on some particular variable looking peaky are only likely to hurt the growth of their portfolio.

As Ben Carlson at A Wealth Of Common Sense wrote this week:

The biggest issue for most investors has not been the active vs. passive debate or investment costs — it’s been those who have latched on to the pessimistic parade of charlatans who have kept people out of the markets with scare tactics and fear mongering.

Being out of the market for the past 7-10 years has been far more damaging that any difference in mutual fund fees.

The drumbeat of negativity — persistent calls for double dip recessions, market crashes and the end of the financial system as we know it — has been nearly endless during this market recovery. […]

It’s possible that this could be one of the strongest bull markets some investors will see in their lifetimes. These types of gains don’t come around too often and are promised to no investor.

Even being invested in a mediocre fund would have given you pretty great annual returns over the past 3 and 5 years.

It was far more destructive to sit in cash the entire time because you were still nervous about the financial crisis.

If you think missing out on ten years is bad, you probably don’t want to see what would happen if you avoided at least some moderate dollops of equities in your pension planning for a lifetime.

Product of the week: CityAM reports on how IKEA has begun to stock solar panels online and in selected stores, ahead of a national roll-out. Despite the Government trimming the subsidies for solar installation, homeowners can reportedly still enjoy a 6% return and pay off their panels within 11 years.

Some links are Google search results – in PC/desktop view these enable you to click through to read the piece without being a paid subscriber of that site.2

Book of the week: As an article in Quartz recently pointed out, the world’s smartest people read a lot of books. Correlation or causation? Surely a bit of both. Biographies are a big hit with these high-achievers, whether their role models hail from business

or the Roman Empire