How to invest in German companies 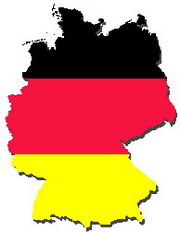 I wrote recently about Germany’s super GDP growth. Germany’s exporters are making hay this summer, which may mean it’s a good time to invest in German companies.

By rights, this shouldn’t be happening.

If the Euro didn’t exist and German companies were trading under the Deutschmark, that German currency would be most beautiful in the Western world and rated sky high against the basket cases elsewhere. German companies would be laying of workers to try to retain their competitiveness – like US ones did – or simply losing sales like the Japanese.

The sovereign debt crisis that caused currency traders to dump the Euro has helped the Germans, whose exporters now enjoy a very useful currency advantage. Weakness in the south of Europe means the ECB’s single interest rate is lower for the north than it should be, too.

No wonder unemployment is already falling in Germany and GDP growth came in at 2.2% in the second quarter.

How to invest in German companies

If you think this splendid combination of a weak currency, low interest rates, and a strongly recovering domestic economy will continue for Germany, then you may want to invest in German companies.

There are a few ways that UK investors can do this:

With their low costs, ease-of-trading, and diversified holdings, index tracking funds should be the first thing to consider. Sadly though, I’m not aware of any London-listed ETFs that track the DAX, the main index of Germany’s biggest 30 companies.

That said, your stockbroker should let you buy and hold Deutsche Bank’s German-listed DAX ETF (dig past the T&Cs on the DB site for details), which costs just 0.15% a year to run, can be held in an ISA, and has UK distributor status for tax purposes. Alternatively, if you like buying US shares look for the US-listed iShares MSCI Germany Index Fund. The annual cost is a steeper 0.55%.

Buy an iShares ETF with exposure to Germany

If you want a UK-listed ETF, iShares does offer some tangential options. I’d consider the iShares Euro Stoxx Total Market Growth Large ETF (Ticker: IDJG). It’s a mouthful, but it’s a mouthful with decent exposure to big German exporters like Siemens, Daimler and Bayer, as well as similar companies from France, Italy and elsewhere that should also benefit from Euro weakness.

Have a hunt around the iShares site for other European options, with a value or smallcap tilt.

Alas, the investment trusts I looked at only have 10-20% of their chips on the German table. Also beware of very German sounding investment trusts – they are virtually all property companies, which is a different proposition to investing in German exporters.

(Note: there may be German unit trusts available, but I almost never invest via those and don’t know of any off-hand. Tell us below if you do!)

If you’re a stock picker, then you could invest in German companies directly. By buying shares in Siemens, BMW, and so on, you’d get a fair proxy for the German export sector. I’d be very unlikely to buy German stocks, though, since as well as all the other hurdles of stock-picking I can’t read the language!

Exchange rate fluctuations between the pound and the Euro will partly determine your returns if you decide to invest in Germany.

Remember though that currency risk also acts to diversify your portfolio, so it’s swings and roundabouts.

As you’d expect from the most liquid asset, currency moves are inherently unpredictable. Yet it’s hard not to look at the following graph and see a pound that’s likely to get stronger in time:

A stronger pound versus the Euro would reduce your returns if you invest now in German companies, since your Euro-denominated investment would be worth fewer pounds when you bring your money home in the future.

But as I say, nobody knows for sure when or if that could happen.

What about valuation? Going on the latest data from the FT, the German market doesn’t seem particularly expensive from a P/E perspective:

Remember that each of those indexes boasts very different kinds of constituents – and the P/E takes no account of domestic tendencies towards debt or cash, say, which limits the usefulness of a comparison.

For my part, I’ve decided not to invest in Germany specifically for now (I permanently hold a range of overseas trackers, including a European one). I think the UK market looks just as affordable and geared to global growth, and I fear a £/€ currency shift would be more likely to hurt my returns if I invested in Germany now, rather than ‘surprise to the upside’, as the Cityboys say.

On the other hand, if the Euro weakened against other currencies as well as the pound, that would help German companies to compete even harder. So there’s a bit of an in-built hedge at play.

As ever, a long-term portfolio-based approach is best for most people, as opposed to speculating on the economic roundabouts of international trade.

But if you want to invest in German companies for the long-term, then the weaker Euro certainly provides a good justification to take the plunge.