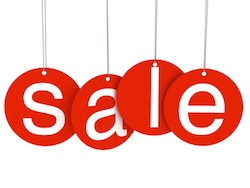 The more opportunistic London rioters have been grabbing plasma TVs and trainers in the mayhem. While it’s pure burglary, at least there’s some rationale to their criminality.

Do you want to snag a bargain in the equivalent stock market furore? I’ll quickly run through a few things I’ve been looking at or even buying, just to give you some food for thought.

Disclaimer and warning: These are NOT recommendations for you to buy. They are at most a few ideas for further research. As ever any decisions you make are your own, and your trades are not my responsibility. I’ve written what I believe to be true, but it might be wrong. These are fast markets1 and there’s no reason why you have to get involved.

All shares are much higher risk than cash or bonds, and you can lose all your money. That said, the following look good opportunities for more risk-averse equity investors.

You can now buy Tesco at around the same price Warren Buffett paid when he first bought into the supermarket everyone loves to hate. Stonking 4.3% forward yield from one of Britain’s most consistent dividend risers. Great overseas prospects, and solid asset backing.

This FTSE 100 engineer fell nearly 9% on Monday, just a few days after it reported record orders and great profit and sales growth. It is closely tied to the commodities industry that was flavor of the month a month ago. Looks cheap, on a PEG rating 0.5. I suspect hedge fund dumping.

A few weeks ago Australia was a safe haven. Now its stock market is officially in bear mode, with 20%+ declines in the past three months. The iShares Australia ETF (Ticker: SAUS) is an easy way to buy into this commodity rich list.

I’ve written about RIT Capital Partners before. The Rothchild investment trust is one of the nimblest out there, but it’s falling like a stone and is now back on an estimated discount to NAV of nearly 7% – that’s quite big for this trust. Some of the income investment trusts are moving to a discount, too.

The share price of this superb manufacturer of safety-orientated devices (Ticker: HLMA) soared out of the recession, yet profits didn’t stop growing even during the worst of the downturn. It’s got one of the UK’s best dividend records, too, and although the forward yield is only 2.7% it has grown strongly in the past and is more than twice covered.

A trio of ideas here.

Down nearly 25% in five days and more than a third off its highs in April, Tullow (LSE: TLW) is an £8.5 billion oil and gas explorer with operations right around the world. A fair bit of debt, true, but if you are one of the legions of peak oilers, it could be a fresh opportunity to pick up a quality asset.

Xstrata has moved almost in lockstep with Tullow, despite being in the mining sector and again reporting positive results. Funny how China has suddenly stopped industrializing, eh? I’ve avoided these sorts of companies for years (and before the 2008 crash if I’m honest) but they’re getting interesting. Again I suspect hedge fund dumping.

This investment trust (Ticker: CYN) could be a good way to get into commodities if you don’t want to invest in individual shares. Be warned it’s very volatile, and despite the name the yield is tiny. Indeed, it harks back to a time when commodity companies paid big dividends, which shows how far they could yet fall. BHP Billiton (Ticker: BLT) could be a better bet for income seekers – massively diversified, and the yield is back above 3%.

I repeat, shares could easily fall another 10-20% or more from here. But if you want to take a chance, here’s a few risky things I’ve been looking at.

A few weeks ago there was a new tech bubble in full swing, although everyone has seemingly forgotten about that now. If you want to take a big punt on things going back to usual, then these subscription shares (Ticker: PCTS), which key off the Polar Capital Technology Trust (Ticker: PCT), could prove lucrative – they were trading nearly four times higher a few months ago. They expire in March 2014, with the option to buy PCT shares at 478p. That trust currently costs 310p, so it’s a not inconsiderable mountain to climb in two and a half years.

Artemis Alpha Trust (Ticker: ATS) is a global fund with a bias towards energy and commodity companies. The trust’s subscription shares (Ticker: ATSS) have until 2017 to run, so plenty of time to recover. For that reason there’s a lot of time value in the share price, but that hasn’t stopped them moving in a very volatile fashion in the past few days.

Gold is at an all-time high in dollar terms, yet Medusa Mining (Ticker: MML) is down 25% since the end of May. In the 2008 downturn miners were dumped because of funding fears, but Medusa has over $100 million in cash. The price has run up sharply in the past year, but if you’re late getting gold exposure (like me) it might be an option. Centamin (Ticker: CEY) is similar, and similarly risky in terms of emerging market exposure.

Finally, given all the various potential bargains around and about, you could obviously do worse than just buy an index tracker. Pound cost averaging is a good approach when buying in volatile markets.

Readers, what have you been doing in the crash? If you’ve been buying or selling anything please let us know below.