Bashed but not bashful bankers to get their bonuses 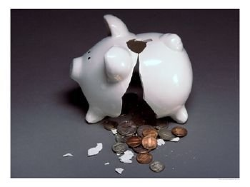 It’s not just me who feels about as sorry for bankers having their gravy train upset as I feel sorry for cancer cells that eventually kill their host.

A nice rant on The Motley Fool today goes in for some rumbustious banker bashing, too.

I particularly liked the following paragraph, which I’d urge anyone who thinks the banks have performed some kind of heroic act by repaying U.S. TARP money to think about:

[Bankers] have generated big profits for their companies over the past 9 months. As interest rates have plummeted and central banks have been printing money like it’s going out of fashion, just about every asset class has been rising.

From the stock market, to gold, to commodities… they’ve all been on an unstoppable, inexorable surge. It has been virtually impossible not to make money in such an environment, something investment bankers seem to conveniently ignore.

Any banker who hasn’t made stacks of money with Central Bank rates of near-0% is cordially invited to a game of no-limits poker with me, any time and any place. (And bring the shirt on your back).

Bankers could have parked money in a Post Office account and profited! We shouldn’t be paying bonuses for succeeding in this environment. We should be taking the under-achieving bankers on special holidays to ride with the donkeys and to think about a new career in drug testing.

Of course, the whole point of unprecedented low interest rates is to enable the banks to make money and so stave off economic Armageddon.

Otherwise we’re back to living in caves, cracking wheat between stones, and using bankers to distract predators away from the villages.

But the public doesn’t get this – it thinks we’ve bailed out the bankers, not the banks.

Then again, you can see why they get confused, since the bankers think the same thing. Hence all their umbrage over bonuses and regulation.

A comment on the Fool article nearly nails it:

Because these bankers deal in trillions/billions of dollars/pounds (a number way beyond normal values of understanding), then the value they place on themselves for dealing with such volumes becomes commensurate with the value of the bonuses.

That’s true. The bankers’ sense of ‘a lot of money’ has gone out the window.

But what’s worse is that their ability to cream off 1% has multiplied the rewards of banking many times over, as the world’s capital flows have surged over the past 20 years. Bankers have not got 100 times more skillful, or scarce, or anything like it.

They just don’t get it – they believe their own hype. They bank their bonuses, and like a soggy woman in a L’Oreal advert, they rationalise that it’s “Because I’m worth it” rather than “It’s because we can get away with it”.

Psychologists have shown you can train people into believing just about anything if you put them in the right role. Famous experiments have turned students into torturers, and faithful lovers into would-be cheats.

So perhaps it’s our fault, for allowing bankers to think that £100,000 was chump change for so long.

That’s about what I think the average high-flying medium rank banker should be earning in salary and bonus, by the way. I’m not saying banking is an unskilled job, or an unnecessary one, or that you don’t need to be fairly bright. I’m saying it’s grossly overpaid.

We laughed when that supermodel said she didn’t get out of bed for less than £5,000 an hour, but at least she had a shelf-life. Like the undead, these bankers are unstoppable. Shoot ’em down with a worldwide economic crisis they caused and they pop right back up, like ducks at the fairground.

Bankers to get their bonuses

At the end of the day, all our ranting and indignation about bankers has been a useful way of letting off steam – riots are so bad for tourism – but it hasn’t change their antics one jot.

When given the chance to do the right thing by the nation that bailed them out and the shareholders that supported them – or to instead pay themselves twice as much at the shareholders’ expense to get around the Government’s surcharge on bonuses – guess what the bankers have decided to do?

Yes, bankers have chosen to take the bonus despite the tax, thanks very much.

Don’t say I didn’t warn you.

We need banks to make billions to repair the economy. We need bankers to make millions like a hole in the head.

Previous post: What should a new investor be told to do?