At last, some good news for the good guys: Budget 2014 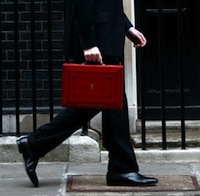 I started Monevator seven years ago, writing about the rewards that would shower upon the righteous who followed the virtuous path of spending less than they earned, saving the difference, and aiming for financial freedom.

As for taking the opposite path – that of a feckless borrower, say, or a risk-taking punter – then woe be upon you.

What lousy timing I had!

Within 12 months the financial crisis struck. The world was turned upside down, and so were the basic principles of personal finance.

Far from coming a-cropper, borrowers with vast mortgages acquired at the top of a housing bubble were bailed out by the lowest interest rates for 300 years.

Far from being rewarded for saving, interest rates on cash deposits plunged below inflation, again favouring borrowers over savers.

The stock market pretty much halved from peak to trough, shares in blue chip banks were decimated, hitherto safe-looking stuff like PIBS went loco, and crazy-eyed gold bugs made out like bandits.

Forget prudence. The luckiest person to be was someone who’d over-borrowed in the bubble years to buy the biggest house they could – perhaps using an inflated self-cert loan, preferably signing up for PPI in the process – who didn’t bother with savings or pensions or any of that old rubbish.

Mortgage rates slashed, seven years of inflation, and a bit of PPI compensation to boot. Result!

So much for personal finance 101.

How savers were screwed

Many people have suffered in the downturn. They’ve seen their real incomes curbed, their benefits cut, their bedrooms declared surplus to their requirements.

Some of this was warranted. Some not.

But there’s no disputing that the most ironic misery was that inflicted on savers who’d done the right thing during the borrowing binge that led up to the crash.

Their poster child – or perhaps pop-up OAP – was someone who retired during the turmoil, was forced to buy a rubbish annuity touting a woeful income using their depleted pension funds, and saw any other spare cash languish at pitiful rates of interest.

This person won’t get the natural sympathy we have for say the young and unemployed, or the genuine victims of welfare restraint.

The relatively flush private pensioner still gets a pension. They are not on the streets.

True, but there is a bigger picture here.

When someone comes to draw their pension, they’re drawing down on consumption they personally postponed for many decades. A whole lot of foregone pleasure when they could have lived for the day – only to be hit by a dodgy decade at the end.

What kind of society do we want to live in? One where making some sacrifices so you can comfortably take care of yourself in the future is encouraged and rewarded, or a bailout compensation culture where you borrow to the hilt and blame someone else if it all goes wrong, and then fall on the State at the end?

Most people inhabit shady streets of grey, of course, not Benefit Street, Reckless Row, or Horrid Banker Heights for that matter.

But I think it’s inarguable that when it comes to the middle classes, recent years punished the prudent and patted the clueless on the back.

And that’s a terrible lesson that turns moral hazard into a personal finance nightmare.

Hence why the 2014 Budget was so encouraging.

Out of the blue we finally got a Budget that encourages and rewards our efforts at saving and investing.

In fact, the usual suspects in financial services were warning ISAs could be cut down in size – no doubt to try to get more last minute ISA money through their doors from the jaded public.

Junior ISA annual limits rose too, to £4,000. Together, these higher allowances mean a nuclear family of two adults and two kids can shelter £38,000 a year of their savings free from tax.

Another excellent development – cash and stocks and shares ISA allowances are being merged into one New ISA (or NISA) that you can split between cash and shares as you see fit. In fact you’ll be able to swap from cash to shares and vice versa.

This move treats investors as grown-ups, and at the same time it gets rid of a pointless split that has confused and turned off so many over the years.

Some will now churn their asset allocation like a hedge fund manager on commission, but that’s a choice they take. It can only be good news for the rest of us that we’ll now have the flexibility to turn some of our equities to cash if we want to – and also for some of that cash to find its way back into the stock market at opportune times.

Given today’s low yields on bonds, even ardent passive investors could benefit from moving some of their fixed income allocation into tax-protected cash, too.

And being allowed to buy short-term bonds in ISAs will also be useful one day, even if today’s micro-light yields make it seem pretty irrelevant currently.

The bottom line on these ISA changes is most people will be able to shield the vast bulk of their savings from tax if they start young enough, and with less of the restrictions that they faced before.

Meanwhile those of us who have substantial investments outside of ISAs (perhaps because we were slow learners!) can now look forward to getting more of our money sheltered than we thought possible.

In any normal year the powering-up of ISAs would be the big news, as well as another nail in the coffin of pensions – a coffin that already looks more like a porcupine.

But in a pinch-me-I’m-dreaming moment, Chancellor George Osborne then went on to do a Gok Wan job on pensions, too.

Instead of the usual silly fiddling, these look like sensible yet radical changes that Actually Make Pensions More Attractive. (Gasp!)

The biggest change is still to be fully confirmed – that you will be allowed to take your entire pension pot as a lump sum in your mid-fifties. The first 25% lump sum would still be tax-free, but the rest would only be taxed at your marginal rate, instead of at today’s punitive 55% rate.

If that gets through consultation, it’s a game changer.

No more being forced to buy a crappy annuity. Infinitely more flexibility about how you use your money.

No more having to convince a 25-year old that she should save for her retirement in 40 or 50 years time. Instead, there’s an escape clause at 551, at which point she could spend all the money she’s saved on a mini super yacht if she wants to.

Of course she won’t actually want to blow her whole retirement pot when she gets there – not usually.

But she might want to downsize and move to Spain, or invest some of her money in her son’s business, or use a sensible portion to take the trip of a lifetime before her lifetime is over.

Given such freedom, pensions can better stand toe-to-toe with buy-to-lets in the flexibility stakes, as well as two holidays a year in the Y.O.L.O. department.

And that’s important if pensions are to be made attractive to everyone.

Osborne had more tricks up his sleeve, including:

Not all of this is earth shattering, admittedly.

Scrapping the 10% is a welcome simplification, but it won’t add up to much given current interest rates. Premium bonds are poor investments right now. As for the higher rate tax threshold, it should be rising further, faster, after its freezing has dragged millions more into the higher-rate tax band in recent years.

But it seems churlish to complain.

Some people will say that higher ISA limits are only good for the wealthy, and that ultra-flexible pensions can’t be trusted on the British public.

But that’s to misunderstand the mindset of those who save and invest.

It’s not only high earners who will enjoy the higher ISA limits. They will help all kinds of people get their finances into a more tax-efficient place, from those who were tardy about getting started with ISAs to those who receive lump sums, and also normal middle-class earners who want to retire early by saving far more than ordinary mortals.

As for pensions, few people save and invest for 30 years then blow it all in a moment of madness.

We who do save and invest know that doing so changes how you think about money. The very act of getting more people on-board with that mindset could reduce the financial self-immolation going off every day across the country.

Besides, if this is a giveaway then at least it’s one where the recipient has to give something up today to get something better tomorrow, as opposed to spending it all today and then whining about not having enough to get by when tomorrow inevitably comes.

Encouraging more people to save more into more flexible schemes doesn’t solve all the problems of everyone, especially those poorer workers who may have the motivation but don’t have much cash to spare.2

But the Budget is clearly a big step towards rewarding aspiration and self-reliance for many of us. And I’m all for that.

Making something out of nothing

Of course the cynic in me whispers the government is doing all this because it has to. That this is the carrot, and the stick of a steadily diminishing State pension is to come. That the territory is being prepared in advance.

And perhaps it is – though it must be said State pensioners have been virtually a protected species under this government.

But let’s worry about that another day.

The good news is we have a Budget for once that lives up to its name. It will help those with the means and desire to take greater control over their finances to help themselves, from their first pay slip to the grave.

You say this is just a Budget to win votes?

Fine. It gets mine.

Note: At GOV.UK you can download and read all the Budget 2014 documents.

Next post: Weekend reading: Time in the market matters, not timing the market

Previous post: What you need to know about nominee accounts