The good news is the Prime Minister returned from that episode to tell us we’re probably past the peak of Covid-19.

The focus now is on R, aka the reproduction number. Keep it under ‘1’ and the pandemic is not spreading exponentially.

As a nation our R number is now somewhere under 1. Probably between 0.5 and 0.75, although it may still be higher in some places like (tragically) care homes.

The lower the R the better, obviously, but the question will increasingly be how much more [insert what matters most to you] damage we can take to lower it further?

Getting R down from the 3 to 4.5 level that looked like it might overrun the NHS was a no-brainer. But there’ll be diminishing returns.

Full lockdown – or even just heavy social distancing – has health as well as economic consequences, too. Some people will die earlier because we brought a recession upon ourselves.

Yet equally, every micro-notch higher in R that we accept means someone somewhere will die before their time from Covid-19.

That’s the equation for the upcoming weeks.

There are no easy answers. Perhaps there was a more promising hypothesis, but the past seven days looks to have done for it.

I’ve been mildly obsessed with Covid-19 since January (and mildly infected, I believe, in early March). I’ve ridden a rollercoaster from being precociously concerned to evasive action to believing things might not be as bad as was thought and now I’m halfway back again.

Long story short1 a series of intuitions (or guesses, if you prefer) informed by endless reading about Covid-19 convinced me the virus was spreading far faster in the UK than was generally thought likely.

All the experts knew the virus was spreading more quickly than reported cases, of course. But I (no expert) believed it was circulating faster again.

That was a comforting thesis because it suggested (1) the virus wasn’t as deadly as even the more middling predictions suggested and (2) we might reach some level of herd immunity sooner rather than later.

It’s long been clear this virus has a Great White Shark’s nose for the elderly and vulnerable, and I’ve been frustrated we either couldn’t or didn’t shield them better.

But in a super-infectious scenario, for the vast majority of us Covid-19 would be a very mild infection, mostly asymptomatic.

And by the time full lockdown was called, I felt it was possible a large number of us in London at least had already had it.

That proved to be right… a bit.

Peak deaths for the virus occurred in early April. Working backwards gets you to peak infections towards the end of the second week of March.

But how many? For that we can first consider deaths.

Most will be due to Covid-19, but some may have been attributed to the virus incorrectly. For example, there were fewer heart disease related deaths in March. Perhaps some were blamed on Covid-19?

But just crudely guessing 30,000 and assuming an infection fatality rate (IFR) of 1%, that gets you to three million or so infected, with peak infection probably occurring in or around the period of voluntary lockdown, but just before mandated lockdown.

So overall millions have been infected – but not enough to be good news.

Unless… the IFR was much less than 1%, because far more people had been infected?

The hope was antibody testing would reveal that in areas of rampant morbidity to the coronavirus – such as Italy, London, and New York – many, MANY more people had been infected.

If this was true then you could indeed pull down the IFR.

Well, over the past seven days we got the first large scale data – from New York City and Stockholm – and it’s probably not good enough.

The New York City testing is the most promising, implying 25% of its citizens have had Covid-19. However, while that shocked the media it was much lower than I’d been hoping for.

Indeed as reader @Vanguardfan points out, 25% implies an on-consensus IFR of around 1%, if you take into account the number of presumed deaths to Covid-19 in New York City.

And 1% is no comfort if you apply it to the UK’s population of 67 million.

Now, not every last citizen will need to throw the viral dice – we should get some natural resistance to the virus on a population level, before everyone has had it.

However if we assume the chunky herd immunity thresholds that most experts think we’d need to see – at least 50%, possibly more like 70+% – even New York is far from having ‘earned’ an inherent resistance through its deathly exposure2.

This is disappointing to me, though it won’t be unexpected to the experts. It looks like they called it.

Much is still unknown about this virus. For every potential fact I find in early research about it, you can retort with another. Anyone waiting for scientific confidence (proof, for shorthand) better have a lot of series lined up on Netflix.

The huge list of Covid-19 links below (perhaps 20% of what I’ve read this week) gives just a taster.

It’s possible that amid this uncertainty there may be other off-ramps from the bad (though not worst-case) scenario:

I have reasons for making all those suggestions, based on my own reading.

But the truth is there’s an equally long list of reasons to be pessimistic.

As Freddie Sayers concludes in a sober piece on UnHerd that pits Sweden’s top epidemiologist against our own leading figure:

…it’s time to stop pretending that our response to this threat is simply a scientific question, or even an easy moral choice between right and wrong.

It’s a question of what sort of world we want to live in, and at what cost.

An ‘ell of a recession

Bottom line: I no longer hope for a very quick exit from this nightmare, unless perhaps R collapses extremely rapidly in the next few weeks and we can go back to trying test and tracing.

And this probably kicks the V-shaped recovery into the long grass. The drag from physical distancing and other anti-viral precautions alone could knock a few percentage points off GDP, even if we go back to semi-normal.

What are football matches, trade conferences, pubs, easy air travel, and the Glastonbury Festival worth to GDP, to name but a few lost causes?

Even if fatal Covid-19 cases do plunge and more normality can be reinstated, for as long as outbreaks flare up it may be hard to persuade some people to take their chances.

We’ve been bombarded with deathly warnings about the virus and kept under house arrest for a couple of months on its account. Dinner and a show on Friday night? Many may continue to Deliveroo and chill instead.

So L-shaped recovery it is. Probably what’s priced in by the global stock markets, anyway.

You see, a lot of people are talking about market mania after the quick bounce from the March lows.

But this is mostly a US market thing. And in the US market it’s mostly a tech thing. And of the tech companies, it’s mostly a bunch of cloud giants who couldn’t have come up with a better driver of demand than ‘shelter in place’. Strong demand now, plus their valuations turn on the years of prodigious earnings they’re expected to make long after Covid-19. 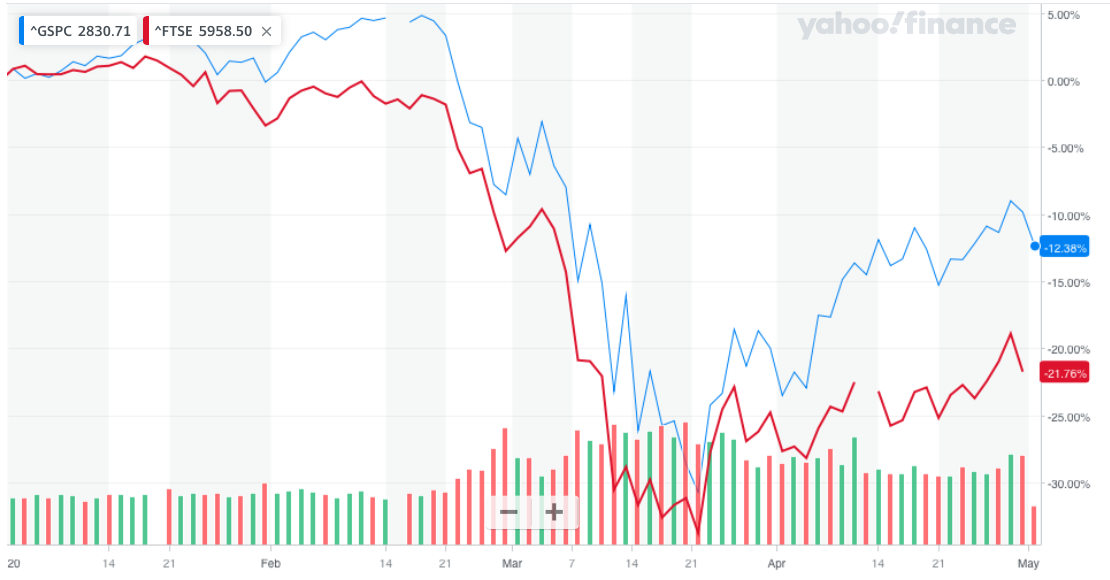 I’ve always been more worried about the financial impact of global lockdown than most, even while I was slightly more sanguine about the virus.

So I’ve a horrible feeling that while the UK pandemic probably is past its peak, with the economy it’s like we’re back when people were gasping at footage of Italians stuck inside, hardly realizing the sort of misery we’d soon face.

Note: Fed up with virus chat? I’m planning to drastically reduce the number of Covid-19 links here next week. We’ve just hit that peak, too!

From the archive-ator: Reminiscences of a stock market wallflower – Monevator 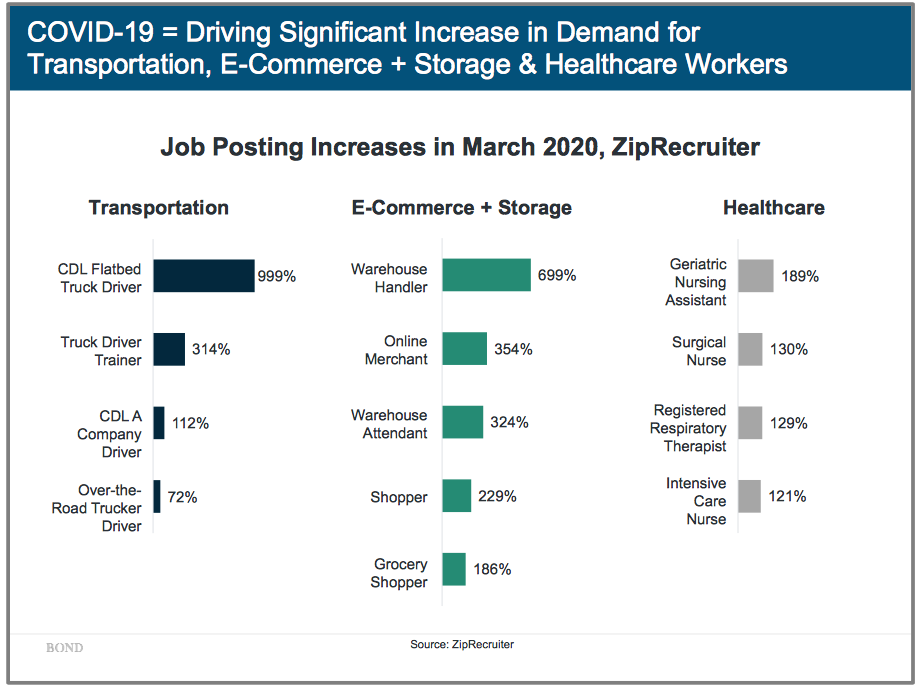 How to apply for a three-month mortgage payment holiday – Which?

Homes on a hillside for sale [Gallery] – Guardian

What was the catalyst for the market rising? – The Irrelevant Investor

Talk is cheap – Of Dollars and Data

But what if we’re wrong and the market never bounces back? – Abraham Okusanya

Why I’m not invested in gold – Get Rich Slowly

When you have no idea what happens next – Morgan Housel

Why value died – A Wealth of Common Sense

Terry Smith: If you must do dividends, look to family-owned firms – Portfolio Advisor

Musings on misadventure and market madness – Simple Living in Somerset

[In email? Visit Monevator if you can’t see a YouTube lecture from CMO Chris Witty]

Self-care in a coronacrisis

This is why you can’t remember yesterday – Medium

People are having less sex in lockdown – BBC

Nobody knows what is going on – Mark Manson

All about those antibodies

Antibody testing: A user’s guide to the immune system [Great primer] – The Atlantic

Can antibody tests tell if you’re immune to Covid-19? – LiveScience

The false hope of antibody tests – The Atlantic

What policymakers need to know about Covid-19 protective immunity – Lancet

The rest of Covid-19 cornered

Why the Coronavirus pandemic is so confusing [Primer] – The Atlantic

Which epidemiologist do you believe? [Sweden versus UK, with videos] – Unherd

How does Britain compare with other countries? [It’s too soon] – Guardian

Many US prisoners test positive in four US jails; reportedly few with symptoms… [to-date] – Reuters

Sweden had no lockdown, but its economy is expected to suffer as badly as neighbours – CNBC

What is the hidden health cost of coronavirus? – BBC

Coronavirus & Brexit: the connections and their consequences – Chris Grey

Has Sweden’s coronavirus strategy played into the hands of nationalists? – Guardian

The Basic Laws of Human Stupidity by Carlo Cipolla – £0.99 on Kindle

What You Do Is Who You Are: How to Create Your Business Culture by Ben Horowitz – £1.99 on Kindle

The Hating Game [‘The very best book to self-isolate with’] by Sally Thorne – £0.99 on Kindle

“Even the darkest night will end and the sun will rise.”
–Victor Hugo, Les Misérables

Next post: Weekend reading: Get ready for the drop