Weekend reading: How high property prices are making many of us relatively poorer

I think we’re nearly all agreed now that UK property prices are too high, and in the South East at historically stretched levels compared to rents or incomes.

(Okay, so my mum is a holdout. She rightly views my housing sob story as leavened by a substantial dollop of my own personal failings… I think she also wants to see a granny annex in her future!)

You do still hear from the odd Barry Blimp who says that it was just as difficult to buy in his day, when he bought a three-bedroom house in Zone 2 in London aged 25-years old on his graduate salary – and that he managed it because he didn’t own an iPhone.

But even most naysayers have shifted to tell you that fine, yes, house prices are absurd, but what’s so bad about renting anyway?

This view is invariably advanced by people who haven’t rented for decades, and often as not who’s only recent contact with a tenancy contract is the one they just got signed for their latest buy-to-let.

Down and out in London and Bristol and Oxford and…

Meanwhile people who feel locked out of the property market know that it’s not just a matter of being allowed to bang nails into the walls to put up their own IKEA pics.

They can see how not owning housing – geared up via a mortgage to lottery-level winnings for older generations – has left them floundering in the wake.

I see this illustrated all the time with my 40-something London friends.

The majority who bought in their 20s never stop taking holidays, eating out, and buying fancy bits and bobs.

The few who didn’t even avoid having too many Sunday lunches in the local gastropub – or go the other way, throw in the towel, and spend their large yet useless deposits on year-long hedonistic benders. (i.e. A bit of travel).

As for my 20-something friends, they live from paycheck to paycheck and imagine owning a one-bed flat with the same sense of wonder with which the Baby Boomers viewed the moon landings.

Before anyone gets out their tiny violins, I’m not talking about me. My lifetime savings rate has been very high, and my investment returns above average. As a result I’ve amassed a chunky warchest. I could buy, but I don’t.

However I don’t think it’s reasonable to expect an entire generation of bright young people to turn themselves into a Scroogier version of Warren Buffet just to do what their parents did as a matter of course.

Fine, perhaps this is the way the market will be for the foreseeable future. But if we’re being pragmatic then we should at least acknowledge the strain it is putting on social norms.

The return of feudalism

In particular young people – who also face student debts, high rents, low wages, unfunded pensions, and no chance of a BTL windfall – will get relatively poorer even if they do the right thing, unless some sort of action is taken.

Business Insider recapped a Resolution Foundation paper this week that shows how property ownership in the UK is driving inequality.

Britain has changed since 1998.

Back then, it only took workers about three years to save enough money for a down-payment on a house.

Now it takes 20 years, on average.

(Sure Barry, it was just as hard in your day. The kids should shut up and stop drinking cappuccinos, right?)

This graph shows how property ownership is now the major driver of inequality: 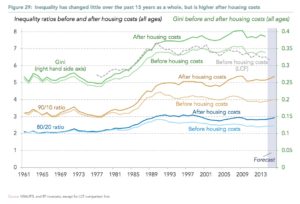 Note the divergence on the right hand side (Click to enlarge)

The key is to look at how the lines used to be close together, and now aren’t. It was not ever-thus, in short. Not owning a home didn’t put you on a downward escalator for life.

Like most, I don’t see much in the Housing White Paper that looks likely to address the under-supply of new homes in the UK.

Perhaps recent political events might if they curb migration and hence population growth – but then lower immigration could also reduce supply by depleting the workforce. (House builders are already complaining about a skills gap).

Maybe it’s time to think differently. If we can’t build enough extra houses, then perhaps those without houses could get a different kind of tax break, for instance.

It irks me enormously that friends see 10-20% capital gains tax-free growth each and every year on their homes while I face a huge bill if I sell various un-sheltered legacy holdings.

Shouldn’t investments be fungible, especially nowadays when it is so much harder to buy property? Maybe if you don’t own your home you should get a six-figure CGT allowance?

Okay, that’s an aspiring 1%-ers problem. The vast majority of millennials will struggle to even make a dent into the new £20,000 annual ISA allowance that’s coming in April.

Maybe renters could deduct their rent from their income tax bill? It sounds insane, but then crazy ailments may require outlandish treatments.

What the government should not do is row back on the tax changes hitting BTL. If anything it should speed them up. There’s no justification for a policy that actively encourages a minority to get richer, as per the inequality graphs above, while other citizens are locked out.

Oh, and before someone says it, I don’t think inheriting property wealth is the ideal solution. That just compounds the new feudalism of a property owning class and a rootless peasantry that we seem to be sleepwalking into.

Unless like me you want to start taxing inheritances at 90% or similar. And I know very few of you want to do that. 🙂

Here’s a few more property stories from this week:

Product of the week: Reports of the demise of the sub-1% mortgage rate were exaggerated, The Telegraph reports. Santander is out with a new 0.99% fixed rate mortgage. It’s good for 18 months, but you’ll need a 40% deposit to get it. You can also still get 0.98% from the Yorkshire Building Society. That’s a tracker though, not a fixed rate product, so you’ll be at the mercy of – ahem – soaring interest rates.

Book of the week: I missed The World According to Star Wars when it was published last year. But I heard an interview with the author Cass Sunstein this week, which piqued my interest. His book recaps the movies’ success, before exploring how we can apply its lessons to everything from law to parenting. Sunstein is a Harvard professor who wrote the influential Nudge, and his new book also has a serious intent. Another one for the pile.

Next post: The simplest way to rebalance your portfolio