A common dilemma as a stock picker is the decision on whether to buy a big established firm or instead the hordes of new entrants looking to unseat it.

Typically a value investor will buy the biggie and pour scorn on the little guys and their bold ambitions.

However that isn’t always the right thing to do, as an interesting piece by Meb Faber pointed out this week.

Meb recalled that back in 2000, a question doing the rounds in his circle was whether it was better own US drugs giant Pfizer or instead buy all the equivalently valued biotech market, which was full of companies seeking to displace it.

A lot of time has passed since then, so he decided to find out the answer.

The next 15 years started with a stock market crash, which as you’d expect walloped the biotech index for six, with huge declines from its March 2000 peak.

Over the same period Pfizer was merely flat.

Yet the race was not yet won – and over the next 12 or so years of recovery, biotechs roared back.

In contrast, big old Pfizer has advanced a mere 50%. 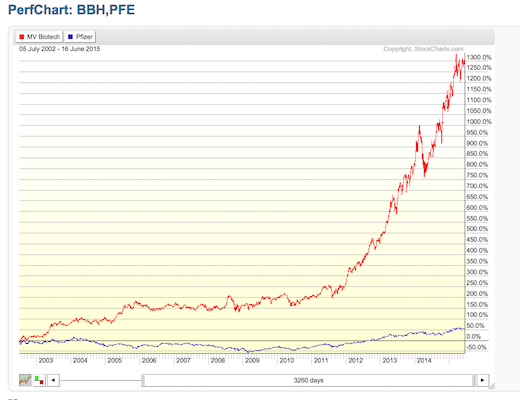 Buying the biotechs would have been far better for your financial health.

Now, I am not sure if these graphs include dividends, which would make a difference for Pfizer.

Also I’d argue it’d be more consistent – if less dramatic – to plot both graphs from the year 2000, rather than off the lows.

Neither of those observations would probably change the thrust though, which is that the biotech index proved the winning investment.

For his part, Meb points out that some of this under-performance is just down to the sheer size of Pfizer – elephants don’t jump, and all that.

I’d add too that Pfizer wasn’t actually cheap in 2000. We easily forget that drugs companies were go-go stocks back then, with the likes of UK mega-drug corps GlaxoSmithKline and AstraZeneca also sporting racy valuations.

On a related note, I suspect biotech is now in a bubble.

Time will tell as always, but writing in The Telegraph, fund manager Terry Smith certainly doesn’t like the odds of picking winners in the sector.

Still, it’s an interesting turn of events to think about as an active investor – especially as Meb goes on to ask the same question of Facebook and the “unicorns” today. (I currently own some Facebook shares…)

Personally though, I’d see it as another reason to make sure I had a clearly defined dollop of small cap exposure in my diversified portfolio.

The UK market, for instance, is dominated by a handful of huge Pfizer-like incumbents.

Adding small cap shares to portfolios has previously boosted returns and I’d bet on that happening again over the long-term.

(Note though that Lars Kroijer, for one, disagrees it’s a sensible way to invest…)

Ruse of the week: Waitrose has launched a ‘pick your own offer’ scheme that enables you to get a 20% reduction on your (limited) choice of favourite groceries. The Guardian explains how to make it pay.

Book of the week: The man who inspired The Atlantic’s do-gooding author has written a book on being a more rational giver. Doing Good Better

will be published in August but it’s already available for pre-order.