A few good reads from around the web.

When a politician goes one way on an investment, it’s very often a good idea to run the other:

Politicians are not investors or traders

Consider Gordon Brown’s sale of Britain’s gold, which marked the bottom of the market ahead of a decade in which it rose five-fold.

Politicians first priority is to get reelected

Maybe that’s fair enough in a democracy. But it inevitably leads to short-term gains and long-term pains.

Again, as it should be. But don’t say you weren’t warned!

For example, let’s imagine you’d done the right thing, saved for your old age, and bought an annuity with your retirement pot, while keeping some cash back for emergencies.

Instead of rewarding your good behaviour, governments across the Western world have chosen to bail out the indebted and feckless via ultra-low interest rates, as a byproduct of staving off an even worse financial downturn.

I don’t think they’ve made the wrong decision, from their point of view, and perhaps the nation’s, especially in the short-term, when moral hazard can be conveniently chucked out the window. But if you’re a pensioner living on a fixed income – or indeed anyone without debts to be eroded by inflation – you’re paying for it.

It’s in this spirit that we should consider Chancellor George Osborne’s plans for the UK to issue 100-year government bonds (gilts).

In his Budget next week, Chancellor George Osborne will announce that he will consult on creating a new “super-long” gilt that could even be issued with no set redemption date.

The theory is that these super long-term gilts would allow the government to lock in the current record low interest rate for a very long time.

If the bond proved popular with investors, future governments would pay less debt interest for years to come.

I think this is a great idea, from George Osborne’s perspective. In fact, I’ve been suggesting to friends for months that governments (and companies for that matter) should take full advantage of the past three years of bearish fear and insecurity that has driven bond yields to record lows.

“When the ducks quack, feed ’em,” as they used to say on Wall Street.

I should think bond yields being higher at some point in the next 100 years or so is one of the best bets you could make, just after “always back the broker.”

An even better bet is that 100-year bonds will provide a derisory return, once inflation is taken into account, although we do not know the coupon yet so it’s hard to be entirely confident. (Even I’d consider putting some money into a 100-year bond paying over 6%, but that’s nothing like what will be offered!)

Of course, accurately valuing the returns due from a 100-year bond is the stuff of fantasy. It relies on benign expectations for interest rates that hold for a century.

Consider all the events of the past 100 years – that’s going back to before World War 1, remember – and you’ll see how barmy it would be to buy such a bond at any sort of low yield.

There are already undated long-term gilts on the market that prove my point, as The Telegraph also warns:

Gilts – or bonds issued by the British Government – may appear to be as safe as the Bank of England. But they are vulnerable to any increase in inflation in the period before they are redeemed because this will reduce the real value or purchasing power of both the coupon or income they pay and their maturity value on redemption.

There is nothing theoretical about this – as patriotic investors who bought gilts issued to pay for the First World War found to their cost. Andrew Bell, chief executive of the giant Witan Investment Trust, calculated that £100 invested in War Loan stock nearly a century ago would be worth little more than £2 today.

That calculation takes account of the reduction in the purchasing power of money since 1914.

For nearly as long as I’ve been investing, undated government bonds have been presented as a sort of curiosity piece, showing how silly investors were in olden times. Only recently has this image been undone, as the price of Consols and other irredeemable bonds have soared in the wake of the financial crisis.

Funny how purportedly obvious, inarguable truths are turned on their head if you hang around long enough in investing.

In that spirit, I should note that it’s not impossible these 100-year bonds will be a great buy. But I don’t think it’s remotely likely.

The end of the great bond bull market?

Perhaps I’m one of the last acolytes still infected by the ‘cult of equity’, and I’m ignoring for instance the persistently low bond yields that followed Japan’s bubble bursting in the late 1980s.

If so, I’m in good company. Only a few weeks ago Warren Buffett warned that these ultra-low bond yields were dangerous assets ready to blow.

The Economist also saw signs this week that the bond cycle may finally be turning, asking:

Are we witnessing one of those historic turning points in markets, on a par with March 2000 (when the dotcom bubble burst) or March 2009 (the post-Lehman low)?

The issue is not so much with equities which are continuing the stop-start recovery that has lasted for three years. The interesting issue is the bond market.

Remember, these are extraordinary weird times. Look at the blue line in this graph (from The Finance Blog): 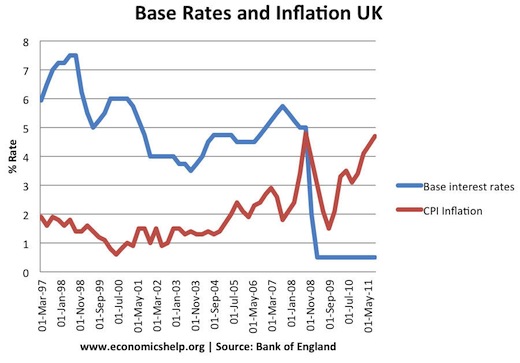 That blue line – representing flat near-zero interest rates from the Bank of England – is bizarre. It’s so odd that you could stretch that graph back 300 years, and you wouldn’t see another period that looks remotely like it.

In contrast, you only need to go back as far as the lifecycle of a typical Hollywood trilogy to see interest rates over 5%.

I wouldn’t be surprised if these 100-year bonds prove to be as blatantly signalling a change in the market as the P/E of the NASDAQ in the dotcom boom, or Gordon Brown offloading our gold reserves in the depths of its bear market.

Many semi-active investors like me have already voted with our feet, and long ago moved money out of government bonds accordingly. That proved a terrible decision in 2011, when gilts soared, but I’m confident it’ll prove the right decision in the medium to long-term.

Passive investors face a dilemma. Many portfolios have a set allocation of fixed interest in bonds.

If they decide to hold and face the music, I wouldn’t blame them. The whole point of the strategy is to avoid being wrong-footed by ‘obvious market calls’.

An alternative for the more flexible might be to cut your government bond exposure, but increase your allocation of special bonus interest rate chasing cash.

Institutions can’t move a few tens of thousands into special fixed rate savings bonds paying say 4%, but we can. I’d suggest you consider using that flexibility, and avoiding the low-yield bond menace.

True, cash isn’t equivalent to bonds, and it won’t rise if the stock market crashes. One response might be to hold more cash than you otherwise would, to reduce your risk in that way instead.

By George, I think he’s got it

As usual, The Daily Mail is utterly wrong on these bonds. It argues Osborne is trying to offload our debts to future generations.

The truth is we’ve already incurred these massive debts, whether explicitly or implicitly (such as through State pension commitments). The question is what interest rate we pay for those debts.

If George Osborne can get suckers to buy his 100-year promise at a multi-century low interest rate, I salute him as a taxpayer.

A cynic might also note that compelling pension funds to own government bonds – and then popularising the canard that they must ‘match their liabilities’ as an aspiration that makes a 0.5% real return look like a triumph, even if it makes such pensions essentially unaffordable for most in the meantime – won’t hurt his sales pitch any.

From the investing blogs

Book of the week: Carmen Reinhart and Ken Rogoff’s 2011 splendid sortie into financial history, This Time Is Different

, is getting a lot of fresh exposure after the former aired her views about the likelihood of governments trying to inflate away their national debts, and impoverishing savers as a result.