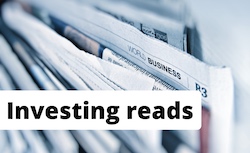 Politics this week. Feel free to skip to the week’s best money and investing links!

I voted for Boris Johnson, to the horror of wiser friends.

Not for prime minister and deliverer-in-chief of a Brexit even he didn’t really believe in. By the time of the General Election his conniving was already enough for me to see even the unpalatable Jeremy Corbyn as an elder statesman by contrast.

Rather, for Mayor of London a few years previously.

I thought London would benefit from his charisma. The quotes from the Iliad made me feel smarter. I was bored by career politicians and their clichés designed not to inspire you but to have you mentally tick a box and move on without thinking.

And I was once in a room with him. He drew all eyes like a matinee idol.

All the more impressive given he plainly isn’t. Rather, like a sorrowful dog who keeps pissing on your carpet, Johnson’s entire demeanor seems a conspiracy of nature that’s been optimized for forgiveness.

You want to ruffle his hair. To sigh. Oh Boris!

An aunt of mine – a tribal Labour voter – even expressed pity as she watched an apparently now tragic Johnson finally get prised out of office this week, with all the grace of a limpet coming off a rock.

My relative had forgotten he’d won the position in his own coup – taking his shot after Theresa May had been slightly more honest about the realities of leaving the EU, and in doing so breaking the first rule of Brexit.

My aunt became angry again when she was reminded about the hypocritical parties in lockdown. And the lies afterwards.

Still – she had to be reminded.

It ain’t half hot mum

Once you see through it, Johnson’s charisma makes him dangerous.

The pull is still there – you can feel it needling you. But it’s more the villainous appeal of The Joker.

Long-time readers know I would never forgive him for his self-serving machinations around Brexit. For standing up and saying what he knew was nonsense to an electorate whipped up on conspiracies about experts, immigration, and alienation.

But it beggars belief that those who voted for him to supposedly ‘take back control’ can look at the post-Referendum years through anything other than their fingers.

Short of doomsday scenarios, it could hardly have gone worse. The trashing of our institutions. The purging of the Tory party. The daily fabrications. Britain threatening to renege on its international deals like a tinpot dictatorship.

Come back Brussels. All is forgiven.

That Johnson still has defenders shouldn’t be surprising, but I just can’t help it.

Do Leavers have some kind of Stockholm Syndrome?

I suppose if you are one of the few who only voted us out because you feared Britain would become a vassal state of a remote EU bureaucracy, then some melancholy feeling is understandable.

Johnson did take us out of the EU.

So if you looked at the long list of problems facing humanity and decided bogus edicts about bendy bananas from across the channel were the biggest threat to your grandchildren, you got what you wanted.

Everyone else should think again.

Some people – on both sides – are claiming that Johnson didn’t even really ‘Get Brexit Done’.

Brexit was always a word cloud of contradictory aspirations.

Singapore-on-the-Thames for the 21st Century. Factory Britain from the 19th.

Economic gains for the taking. Economic pain as the price worth paying.

You could make almost any change and call it Brexit – while pissing off a contingent who’d voted for some other version.

Certainly the Tories didn’t need to go Full Monty Brexit, although it was probably inevitable once Johnson had stuck the knife into both May and her slightly saner deal for his own ends.

Remember that staying in the Single Market and/or the Customs Union was once touted as a feature of some versions of Brexit, not a bug.

But political calculus and reconciling an impossible mandate meant Johnson and Co. went for a Hard Brexit – Irish absurdities and all.

Finally we left the EU.

So yes, Johnson got Brexit done.

True, even Brexit’s most ardent cheerleaders have yet to identify almost any commensurate benefits beyond (for them) the end to free movement.

Of course Brexit has inflicted real and lasting damage to the UK economy – let alone its standing on the world stage.

But none of that is indicative of Brexit not getting done. On the contrary, it’s exactly what we should have expected.

I will concede that immigration into the UK has held up better post-Brexit than I feared it would, though the numbers are likely still muddled by the pandemic.

But that’s been the only positive surprise so far. (And given that a significant minority of Leave voters were motivated by immigration, they might feel differently about the uptick, anyway.)

I’m also aware that some Remainers thought Brexit would drive the UK economy off a cliff, which didn’t happen.

But you will look in vain for me predicting that.

Rather, I see Brexit as insidious because it drains vitality from our economy all over the place, like so many tics on a dog.

More trade friction here. Inward investment that goes elsewhere. A farmer ploughing his unpicked crops into a field. A student who doesn’t get an internship in Europe. Tedious border checks for anyone who works abroad.

And all for what?

Most obviously: the loss of our right to live, work, and retire anywhere in a beautiful and rich continent among 450 million other human beings.

That those who voted this freedom away don’t care about it – and have given us nothing good in return – is most galling of all.

Indeed you’d hope that finally Leave voters would at least reassess their views about Brexit in light of the past few years.

Two of its chief enablers – Dominic Cummings and Boris Johnson – long ago turned on each other.

People who lied there would be £350m more a week for the NHS couldn’t even come clean about partying in a pandemic.

But the polls are less than conclusive.

Nearly a third of Britons still think Brexit is being handled well. I guess for most of them it’s a case of ‘better out than in’ – however stinky the consequences.

But those who were on the fence or who believed there could be net economic benefits are welcome to change their minds.

I saw through Johnson and his nonsense. Others can still do the same – and reassess his toxic legacy of Brexit.

At least if Johnson was our Poundshop Trump, we’ve dodged the equivalent of the 6 January attacks.

Rishi Sunak and Sajid Javid deserve some thanks. Better late than never.

Democracy has many flaws but it has one supreme virtue, which is enabling a peaceful transition.

Similarly, my faint hope is the Conservative party will turn itself back into a party of the center again. It’s hard to recall that its Brexiteers were once a pretty ridiculous fringe faction that all-but blamed the EU for the rain in Manchester.

Can control be wrested away their fantasy politics? We’ll see.

As for Johnson, goodbye and good riddance indeed.

The email version of our article on the Best Cash ISAs on Tuesday featured a pretty annoying typo.

It should have stated that you can put £4,000 a year into a Lifetime ISA.

Huge apologies for any confusion caused. I’d sack the offending sub-editor but unfortunately it was me, and I have an article to write for next week so we’ll have to soldier on.

Also, a half-a-dozen readers have contacted me over the past couple of weeks to report that they’ve subscribed to get our posts as emails but, well, they are not getting our emails.

In all these cases they were in our system but marked as ‘bounced’.

When a reader reports their email is on the contrary alive and kicking, I can put them back onto the distribution list.

So if you’ve subscribed yet your email box is untroubled by us, you might be in this boat too.

Check your spam folder first (the ignominy!) and double-check you didn’t subscribe with another email address. After that, drop me a line via our Contact box (link top-right) stating the email address in question.

Have a great weekend everyone. The country is in a mess, but at least a window for change has opened.

From the archive-ator: It ain’t what you do, it’s what it does to you – Monevator

What does this week’s National Insurance rise mean for your money? – Which

UK energy bills could top £3,300 this winter, according to industry researchers – Guardian

Vanguard not quite perfect, reaches a $6.5m legal settlement in the US – Investment News 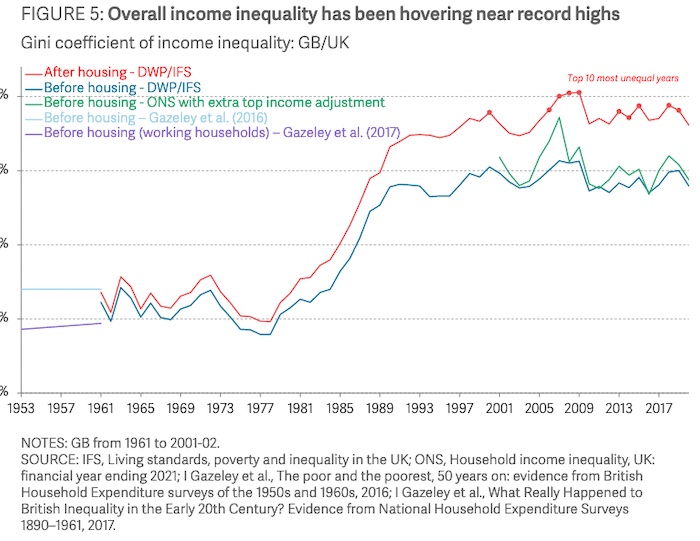 Cheapest mortgage deals revealed as rates continue to rise – Which

The pros and cons of ten-year fixed-rate mortgages – ThisIsMoney

Open an account with InvestEngine via our affiliate link and get £25 when you invest at least £100 (new customers only, T&Cs apply) – InvestEngine

Amazon Prime review: is it worth the money? – Be Clever With Your Cash

Worst first-half for US stocks mini-special 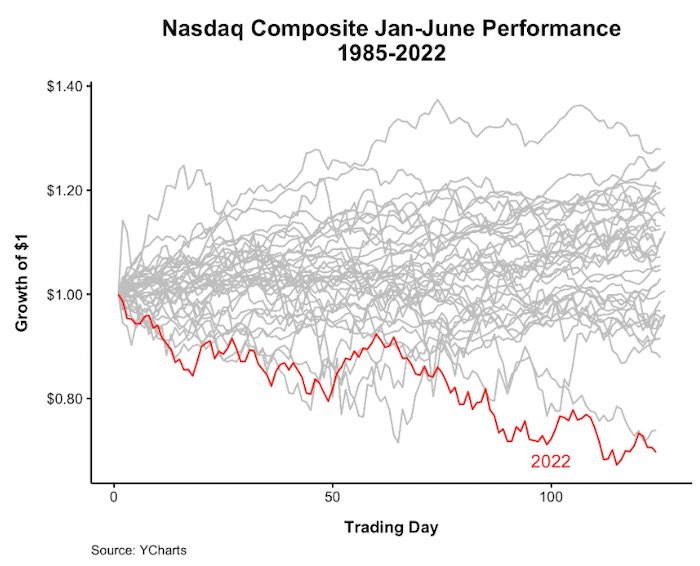 The worst first half ever for US markets… – The Irrelevant Investor

If history is a guide, we might hope for better from the next half – Quantifiable Edges

A deep dive into art as an investment – The Manual

In defense of dollar-cost averaging – Of Dollars and Data

What should long-term investors buy during a bear market? – A Wealth of Common Sense

The case for reverse mortgages [Called equity release in the UK; US but relevant] – Humble Dollar

Plan now for a recession [US but relevant; a deep read] – Research Affiliates

Chaos is a ladder – The Reformed Broker

US bank stocks appear cheap, even given the recession risk – MarketWatch

Amazon Unbound: Jeff Bezos and the Invention of a Global Empire by Brad Stone – £0.99 on Kindle

Secrets of Sand Hill Road: Venture Capital and How to Get It by Scott Kupor – £0.99 on Kindle

Mother of Invention by Katrine Marçal – £0.99 on Kindle

Be Careful What You Wish For by Simon Jordan – £0.99 on Kindle

“A massive betrayal”: how London’s Olympic legacy was sold out – Guardian

“Success isn’t found in the eyes of others: buying things you don’t need, with money you don’t have, to impress people you won’t know in 20 years’ time.”
– Scott Pape, The Barefoot Investor

Next post: The Slow and Steady passive portfolio update: Q2 2022