Weekend reading: 75 not out*

Just when you thought pensions had been rehabilitated with the freedom to spend your savings how you like in retirement – and the laudable success of auto-enrollment nudging you there – along comes a conservative think tank ready to bugger them up again.

Not content with his faction bringing us the thermo-nuclear bungle that is Brexit, former Tory ‘leader’ Iain Duncan Smith’s Centre for Social Justice suggest the government withhold the state pension until 75:

The SPA [State Pension Age] should better reflect the longer life expectancies that we now enjoy and be used to support the fiscal balance of the nation.

There’s a lot to be written about this. For one thing, my co-blogger The Accumulator might have to revisit his fear-de-mongering article on why your pension won’t be plundered.

More seriously, the CSJ report shows its workings, and it’s hard to come away from it without thinking Something Must Be Done. I also personally happen to like the idea of working indefinitely, in some capacity, professional damp squib to the FIRE brigade that I am. I believe it’s probably healthier for most of us.

However I’d certainly expect to be easing up into my 60s. Perhaps a day or two a week by 70. I’d want to have options. I wouldn’t want politicians forever moving the goalposts away from me like some demented version of football devised by the Greek philosopher Zeno.

An additional fear for the likes of us is that the age when we could access private pensions could also leap.

The alternative – wealthy types retiring in their 50s en masse to be served lattes on weekday afternoons by bitter septuagenarians – sounds almost worse.

Of course this is only a proposal. It carries exactly zilch formal weight. Even Duncan Smith has said it’s not his policy, and he’s a Magneto for nonsense.

But I do think it’s a reminder that the rules of the game can and will change again and again.

In just the life of this blog we’ve seen it with everything from the pension lifetime allowance to the taxation of dividends to those who came here from the EU in good faith and lived here for decades being ordered to pay up for the right to stay.

Change is constant, which is why I’m as bemused when I hear people explain their entire strategy is 100% based on pensions as I was when old-time investors told me they eschewed using ISAs because their dividends were tax-free.

Political risk is hard to avoid unless you’re ready and able to move (and let’s not mention expats again this week, eh? 😉 )

But there are pragmatic approaches you can take, such as using various investment vehicles together (ISAs and pensions, at a minimum, and probably also property), keeping your hand in at earning to preserve your human capital, and trying to stay healthy for as long as possible.

*If only Joe Root could say the same.

How to invest as an expat – Monevator [Controversial, several comments add a lot of value]

From the archive-ator: Is your cash safe in the bank? – Monevator 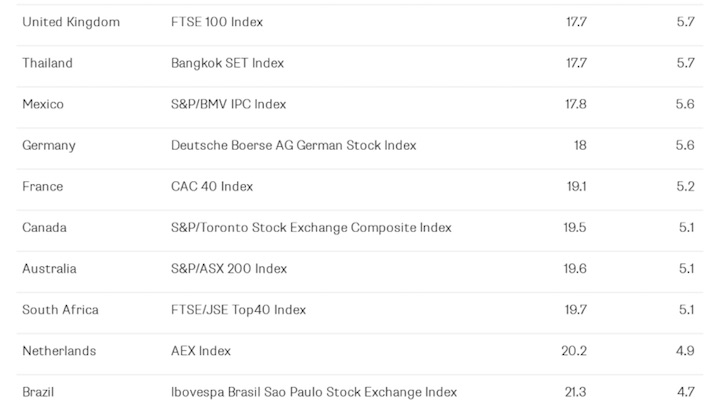 The top four portfolios to recession-proof your investments – Portfolio Charts

Financial struggle and the human instinct – The Simple Dollar

How to make a thousand bucks an hour – Mr Money Mustache

Which countries have the greatest per capita wealth? – Visual Capitalist

Why you should keep playing offence into early retirement – MarketWatch

A deep dive into the WeWork IPO – Stratechery

Is US market outperformance a result of its sizeable tech sector? – Elm Funds

Trend investing protects the downside, but at a cost – Movement Capital

The Winning Formula: Leadership, Strategy and Motivation The F1 Way by David Coulthard – £1.99 on Kindle

Essentialism: The Disciplined Pursuit of Less by Greg Mckeown – £1.99 on Kindle

The Miracle Morning: The 6 Habits that Will Transform your Life before 8AM by Hal Elrod – £0.99 on Kindle

The Asshole Survival Guide: How to Deal with People Who Treat You Like Dirt by Robert Sutton – £1.99 on Kindle

The Athletic keeps on signing subs. An antidote to clickbait media? – Bloomberg

“The psychologist Gerd Gigerenzer has a simple heuristic. Never ask the doctor what you should do. Ask him what he would do if he were in your place. You would be surprised at the difference”
– Nassim Nicholas Taleb, Anti-fragile: Things that Gain from Disorder

Next post: How will no-deal Brexit affect your investments?