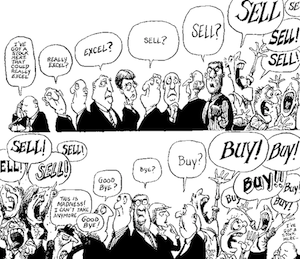 Given that investors’ emotions move in cycles from fear to greed and back again, two obvious questions to ask are “Where are we in the cycle now?” and, as greedy asset gatherers, “How can I make money from it?”

Entire books have been written about slumps and bubbles.

For this post we’re going to make do with a few over-simplified graphics.

Note that in the different attempts at visualizing investors’ emotions that I’ve collected below, you won’t find any shots from charting tools or similar

While I’ve no doubt that investors’ emotions do cycle, I’m very doubtful that many people can take short-term advantage of it through charts. So no double-tops, candlesticks, death crosses or any such technical analysis bric-a-brac here.

Rather, the main benefit to understanding emotions and investing is to know yourself better.

Once you appreciate how psychology moves the markets – and can influence yourself – it should help you stick to your plan, whether it be sensible passive investing or more hands-on active investing antics.

Nobody is immune to the cycle of fear and greed. Even the greatest investor can get carried away, or else be made miserable by a deep market downturn.

From euphoria to despair 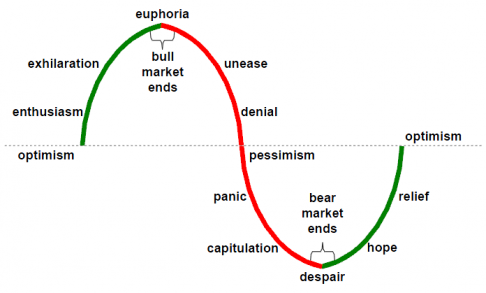 When I wrote that I thought the markets were a clear buy in March 2009 for anyone who was ever going to buy shares, I got nasty comments across the blogosphere.

I don’t mean “yeah, perhaps, but I don’t think he’s right”. I mean suggestions I was part of some secret narco-government backed plan to ramp up the market to make the last few people with any cash insolvent.

The nicer ones just said I was an idiot.

That’s what the bottom of a bear market looks like. (While I was confident it was a buying opportunity, I won’t pretend to have known the subsequent rally would come so swiftly!)

Nobody rings a bell at the top 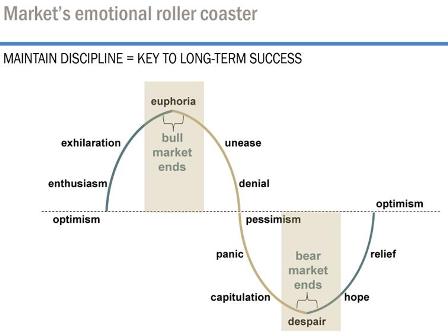 This is the same graph as above, really, but I like how the creator has put in the shaded areas. This stresses that there’s a phase of euphoria and of despair, rather than a single event that marks the top or bottom.

In terms of the US shares that make up the largest part of the assets of a global tracker, I’d guess we’re somewhere between exhilaration and euphoria.

That’s hardly the case for the Brexit-blighted UK market though. With domestic-facing stocks especially, it feels like we’ve been trudging through the denial to capitulation stage for at least three years.

As for the rest of the world – ex-US – I’m torn between thinking we’re sitting on an upswing at the optimism point, or sliding down the other side of the graph into pessimism!

The following graph is illustrative. It shows the divergence between the valuation of US shares and the rest of the world: 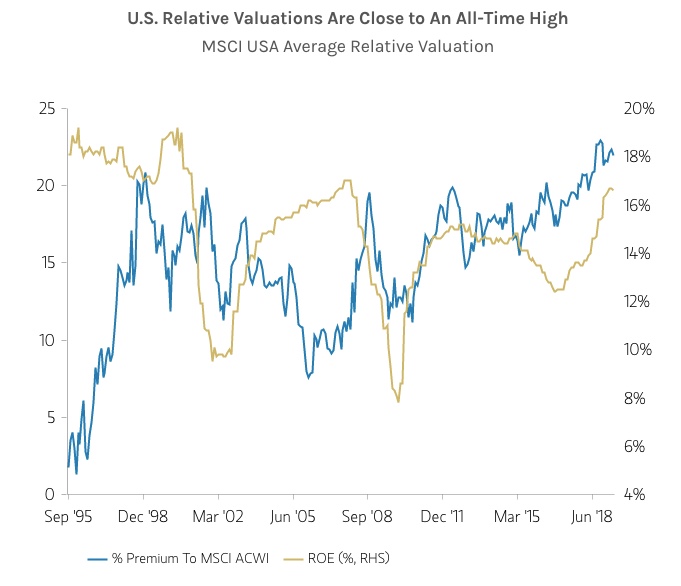 In other words, the US stock market looks very expensive compared to the rest of the world but – like the similar divergence between growth and value shares – this relative costliness has been the case for years now.

Timing a reversal is hugely difficult. Most investors will do better to stick to a passive investing plan.

Blast from the past: In the 2010 version of this article, which I’m updating in 2019, I judged global markets sat somewhere between hope and relief. I wrote: “If I’m right, then the masses who are still waiting for an optimistic mood before buying will pay a steep price in forgone returns.” History has shown that was true, demonstrating at least the potential for making a ‘precisely wrong but roughly right’ long-term forecast. (Or, alternatively, proving one can get lucky now and then!)

Most active investors, for their sins, need to pay attention to sentiment – otherwise they’ve no business active investing.

It’s usual better in the long run to buy an asset nobody currently wants, mainly because you might get it cheap.

If it’s cheap then there’s less far for it to fall, as well as much higher for it to climb.

Also there’s probably not much optimism ‘baked into’ the price. That means there’s potential for something unexpectedly good to happen, which could lead to a reappraisal of the asset’s value.

In contrast, buy something everyone loves when everyone is buying, and if it disappoints you face the double-whammy of a de-rating.

Elementary, you’d think, but for some reason people like to buy expensive. Just ask my friends, who almost to a man1 shunned my suggestions to invest for the long-term in the 2008/2009 bear market.

“Superior investors are people who have a better sense for what tickets are in the bowl, and thus for whether it’s worth participating in the lottery.

In other words, while superior investors — like everyone else — don’t know exactly what the future holds, they do have an above-average understanding of future tendencies.”

Nothing new under the sun 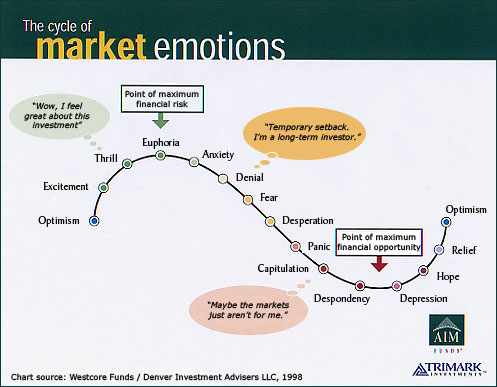 This is clearly just the chart above, jazzed up for a fund manager’s literature.

What’s interesting though is the date. This chart was created in 1998. Just two years later we saw the mother of all stock market bubbles, and nine years later one of its fastest and most frightening slumps.

If you’d seen this chart 12 years ago, wouldn’t you have been better placed to ride through that roller coaster?

Little ups and downs add up 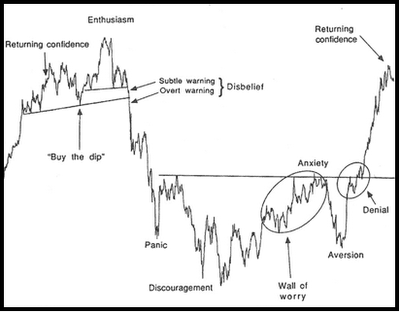 I like this graphic because it includes lots of jagged lines. The other charts make riding investors’ emotions look as simple as going up and down on a see-saw, but in reality it’s a lot tougher than it looks.

Is any particular zig the start of a new leg-up – or is it the last gasp before a zag down into a slump?

Funny old investors, and their emotions 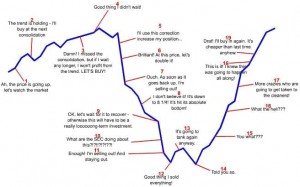 I’m pretty sure I first saw this graph during the dotcom boom. It’s been regularly wheeled out ever since.

No wonder: Whoever knocked it up all those years ago knew everything you need to know about investors’ emotions, and had clearly been around the block.

I wouldn’t be surprised if he or she had said these things to themselves. Books and blogs are reasonable teachers, but nothing beats living through a cycle of fear and greed to really appreciate sentiment and emotion in the market. And to get a sense of your own risk tolerance, of course.

Next post: Weekend reading: Great work ends early whether you want it to or not