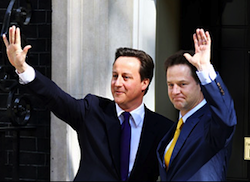 What a relief. For a few terrible hours, it seemed a barmy alliance of the losers could have left Labour clinging to power.

As it is, the right parties got the job.

Yes – parties. I believe this coalition could be the best result for seeing Britain through the vital economic rebalancing to come. Coalitions led us through World War 2, and the fallout from the Great Depression. Partnerships can work.

Indeed, we’re already seeing some welcome changes to Conservative policy under the influence of the Liberal Democrats.

Update: Since I published this article the official ‘pre-nup’ agreement between the Conservatives and the Lib Dems is now available as a PDF from the Conservative website. The main difference between the facts and the early rumors I report below is that the £10K personal tax threshold is an aspiration, not a concrete figure that will be made law anytime soon.

Second Update: You can now download the final coalition agreement as a PDF.

Here’s my take on what it means for us private investors.

Bank of England governor Mervyn King came out this morning and said he was pleased to see the coalition in place. Far from subtle, he said flat out that the need to tackle the deficit has grown even greater in recent weeks, clearly referring to Greece.

Labour hid the scale of the cuts required, and will doubtless barrack the new coalition in opposition. I don’t mind the latter so much – that’s the nature of a loyal opposition – but I can’t forgive the obfuscation before the election. We’re in a hole, and we need to get out of it. I’m glad King has stressed this.

These will surely remain lower as the coalition gets stuck into reducing the deficit faster than if Labour had kept running up unsustainable borrowing and spooked the gilt market. That said, King admitted today that inflation expectations are turning higher than he expected, which seemed to immediately hit the FTSE 100. As I’ve said before, I’d be more worried as a holder of bonds.

It looks like the Conservative’s have adopted the Lib Dem’s excellent proposal that the first £10,000 earned will come free of tax. As I pointed out before the election, this makes nearly all of us better off. It’s also a clear and simple threshold, provided it applies universally.

Inheritance tax threshold will stay at £350,000

Hurrah! I haven’t yet revealed to Monevator readers how much I’m in favour of inheritance tax. I’m happy for there to be some portion paid tax-free, but beyond that I’d even raise the rate. I believe in equal opportunity, not huge handouts for the genetically over-blessed. If people have made money, let them enjoy it. But let their kids earn their own.

As an investor it was hard for me to complain about CGT being reduced to 18%. But I didn’t really understand the rationale, particularly as short-term trading was taxed at the same rate as long-term holdings. Perhaps the new tax rate that’s apparently on the cards will include the return of taper relief?

For now, it’s vital to take steps to avoid capital gains tax ahead of any changes. Active share traders may eventually need to consider running their trading portfolios via spreadbets to avoid CGT altogether. I’ll explain how to do this without taking on excess risk in a future post.

Will we see the Lib Dem’s £2 million mansion tax? I doubt it. But there are reports that the new CGT proposals could hit the second homes market. In a country with limited housing supply, completely silly house prices and five million on the waiting list for council homes, I can’t shed a tear over that if it’s true. (I warned you I was no dyed-in-the-wool right winger!)

I’m all for the coalition taking an axe to middle class handouts like Child Trust Funds. While I fear a dependency culture, I don’t mind paying for poor kids to have shoes and food. But I don’t see why I should pay for the well-off to treat their sprogs to an Xbox 360. Let people spend their own money.

I expect – and certainly hope – that tackling the deficit will be much more focused on cutting public sector spending rather than hiking up taxes. That said, even if the direst predictions of 5-10p on the basic rate of income tax can be avoided now Labour is out (and I think they can), some tax rises are inevitable.

A 1% rise in VAT generates £4 billion in extra income, so a rise to 20% or even 22.5% seems a good bet, although there will obviously be a knock-on consequence for consumer spending.

I believe ISAs are safe under the coalition. Pensions, however, could be the subject of some marital rows between the Liberals and the Conservatives.

Few people claim higher-rate tax relief, yet in total they claim a lot – scrapping it could save £5 billion a year. But that might be a step too far for Cameron’s Conservatives.

What do you expect from the next five years? Let us know in the comments!