Review: How To Make A Million – Slowly, by John Lee 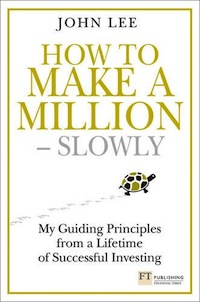 I suspect investors of the John Lee variety are becoming a vanishing breed. Now 71-years old, Lee grew up seeing his father sprawled on the drawing room floor, pipe in hand and fortune on the horizon, scouring defunct publications like the Stock Exchange Gazette for bargains.

“Money is not for spending, it’s for buying shares,” his late father used to say, and while Lee – today Lord Lee of Trafford – claims it was meant as a joke, he’s still followed in his father’s footsteps.

In 2003, Lee revealed to readers of his long-running Financial Times column that he was an ISA millionaire. Quite an achievement given that the maximum PEP and ISA contribution possible between 1987 and 2003 was £126,0001 and the main market had crashed just three years prior.

What’s more, Lee’s ISAs contain just a portion of his total holdings; his writings are scattered with rueful comments about capital gains tax due outside of tax shelters. (I regularly see investors who think they are either too poor or too rich to bother with ISAs – all are wrong, unless they plan on dire long-term returns.)

Lee’s shareholdings have likely multiplied several times since 2003, too. As a long-time follower I know his favourite companies, and his particular brand of small cap share has had a splendid 2013.

Assuming he hasn’t started liquidating his assets, his portfolio must be well into the multi-million pound range by now.

Lee is a wealthy investor, then, yet he’s one who doesn’t use the Internet. Who still attends AGMs and quizzes company management over British tea and biscuits. Who pours through paper-based annual reports for hidden clues to his companies’ prospects. Who doesn’t invest any of his fortune in active funds, index trackers – or overseas at all.

No, John Lee is a Lord of the Realm, a successful businessman, and a sitter-on-boards whose heart ticks fastest on discovering a small, family-run UK firm with a large cash pile and an heirless octogenarian in the chairman’s seat, pondering selling the business to the highest bidder.

He’s an old-fashioned and super-successful investor who is venerable enough to have learned the word ‘alpha’ in Greek in pre-school and for all I know takes beta-blockers for an ageing heart, but who doesn’t let either alpha or beta get in the way of his investment decisions.

Not smarter, but sexier

Given all that, plus his upbringing and his many years spent at Westminster, it’s no surprise that this is an old-fashioned book, too.

In fact, much of How to Make a Million – Slowly

is plain ‘old’, full stop, as the book contains numerous reprints of Lee’s columns for the FT.

Some of these are already a decade out-of-date. Obviously they will become ever more irrelevant to modern investors over time, in terms of the facts they contain.

But the reason they’re in the book is because of the messages they convey, not the facts.2 These messages should only become more relevant over the years, as the specifics are long forgotten and cease to cloud the picture.

And in some ways that’s true of the book itself.

You see How to Make a Million – Slowly

is about as far from, say, the passive workhorse Smarter Investing

as you could imagine.

Hale’s book is heavy on data, and to my mind light on charm. I’ve even told my co-blogger that I’m not sure I’d be investing if Smarter Investing was the only book on the subject I’d read.

Of course my co-blogger The Accumulator is a big fan of it partly because he believes that charm is the last thing you need when looking to secure your fortune. Rather, being beaten over the head with the key messages and a vaccination against the wiles of the financial services industry is what people need to swallow.

I agree. And yet, personally, I caught the investing bug not from the thought of a risk-adjusted well-diversified annually rebalanced 5-8% nominal return a year, but from the writings of Jim Slater

, and other articulate – and undoubtedly survivorship biased – active investors.

It’s down that end of the bookshelf where Lee’s book belongs. Indeed, the whole thing reads more like a chat with an avuncular grandfather (who knows, perhaps Lee’s own father?) than a modern treatise on discovering your edge or exploring the efficient frontier.

I hadn’t met anyone who’d ever bought a share until I was into my 20s. For me, that’s a gap worth filling.

How to make a million – really?

What the book also isn’t, really, is what it claims to be in the title – or at least not exactly.

Lee does summarise his approach, which is essentially to buy small to micro-sized niche companies that you judge to be trustworthy when they’re paying a good dividend yield and look cheap on a P/E basis. Then hold for as long as you feel able.

There are only a dozen or so pages that boil down to anything like a checklist. Anyone hoping for the new Zulu Principle

Nor is it, as I’ve hinted above, terrifically introspective about exactly how Lee’s gains were achieved. There is a lot of conjecture about quizzing directors and reinvesting dividends, but there’s not much questioning about risk and returns, or comparing Lee’s annual returns on a compounded basis with an appropriate benchmark.

If John Lee was Warren Buffett, no doubt some quant or academic would come along and explain it could all have been achieved by, say, borrowing money to buy a boatload of shares in a small cap investment trust or what have you (small cap ETFs not having been around for most of Lee’s lifetime, and barely today in the UK).

So let me be clear, rigour is not on offer here. Don’t buy this book expecting a formula, a secret, or even a How To plan.

Nor is this the book for you if you’ve read everything John Lee has ever written, you have a photographic memory, and you don’t want it all compiled in one convenient place (as I myself do), with a bit of intra-book repetition thrown in for good measure.

However if you want to feel like you’re spending time with a successful active investor, picking up plenty of wisdom through osmosis, and that you can learn from even his throwaway lines, then it will prove a worthwhile purchase.

If you love small caps and believe there’s more to risk than volatility – and more to judging a company than the numbers in a database – then this is absolutely the book for you.

That’s doubly true if you invest in the UK, where books by investment legends are very thin on the ground.

A book for lovers

It would be easy to follow Lee’s high dividend, low P/E approach to small caps yet be unlucky enough to invest in many more of the sort of duff shares he candidly reveals buying in his chapter entitled ‘My Mistakes’.

That’s why I stress there’s – patently, obviously – no formula to success. What cynics of stock picking might call his “special magic pixie dust” has surely made a difference to his returns. You won’t become the next John Lee purely by reading his book.

Should you try? I think Lee himself nails it when he writes:

In my view, to be a successful investor requires commitment and time, and you’re only going to put in the required effort if you find the stock market enjoyable and absorbing.

To be blunt, either you fall in love with investing – its fascination and its mysteries – or you don’t. You will know soon enough which it is.

If you don’t, there is no shame in this, just forget it – leave the investing of your money to others, either by choosing a mutual fund / investment or unit trust, or giving a stockbroker or bank discretion to handle your portfolio on an agreed basis.

I disagree with the last bit – if you don’t love investing, I suggest investing passively through trackers, rebalancing annually, and taking the other 364 and three-quarter days of the year off. There’s no need to waste money on brokers, bank managers, or expensive fund managers.

But I agree completely with the first two paragraphs.

If you do love active investing – that is, picking stocks, following companies, and trying to outdo the brightest minds in the business – then like me you’re probably already beyond help, and reading and absorbing this book will I think prove useful, as well as enjoyable.

The Accumulator asked me recently why I invest actively, given that I think most people should invest passively. I said it was because I love it. Some probing revealed that sure enough I was motivated by the possibility of doing better, but I maintain that’s a vital scoring mechanism, not a means to an end.

It’s like a game of golf. Without the chance of achieving a hole in one, golf is just a walk in the park – even if you do it for the comradeship, the challenge, fitness, or simply to get out of the house.

John Lee has done very nicely from his investing, but I suspect he would have kept it up even if he’d done half as well. His passion is what comes through most strongly in this book.

Active investing will never be a walk in the park – but for some of us the slog is the sweeter for it.

Note: You can buy How to Make a Million – Slowly

Next post: Weekend reading: Are you ready to start fearing the good times?