One of the most easily spotted and ever-repeated psychological errors we make is recency bias. This is the tendency to believe that what has happened lately will continue forever.

You see it all the time in comments on Monevator.

To give just three examples:

Of course, I can be as prone to recency bias as much as anyone. But by definition it’s easier to see it in other people.

Recessions are a great time for students of recency bias to pull up a stool, crack out a soda, and start taking notes.

People are invariably gloomy during recessions, and they’ve often lost money. Many are scared. Jobs are lost among family and friends, if not your own.

Yet things do bounce back. The economy does recover. Stock markets sniff it out sooner, and begin to climb 6-12 months in advance.

In the long-run (short of rare catastrophes) things aren’t so bad.

These highs and lows are well-illustrated by this pair of graphs highlighted this week by The Value Perspective: 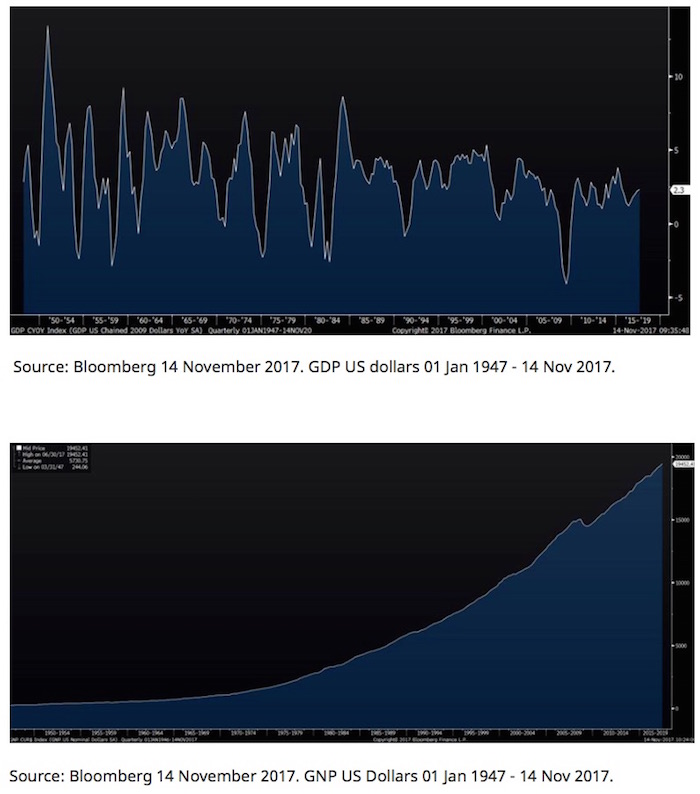 Ready to have your mind blown? The two charts show the same thing:

One may look deeply volatile and scary and the other smooth and reassuring but they actually both represent the same information.

The chart at the top shows how US gross domestic product (GDP) numbers have bounced around since the end of the second world war while the chart on the bottom shows the cumulative effect of that – the actual nominal growth of the US economy in that time.

I keep trying to explain this to people about Brexit. I expect volatility short-term – we’re already seeing that – and with respect to the second chart I expect our slope to be less steep than it would have been.

But we’ll still grow, eventually, over the long-term. It’s just we’ll probably have slower growth, lower total output, and hence a lower standard of living. There will be less money to spend on the NHS and so forth than we would have. And all for very little gain.

To tie this back to investing, here’s one of my all-time favourite graphics from Portfolio Charts.

Look at the following graph. Which of the scenarios – the three colored lines – would you have rather invested through? 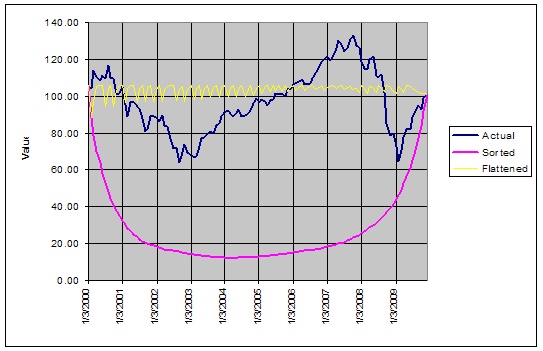 Ready to have your mind blown, again? They all show the same returns!

If you’re like me, the yellow portfolio intuitively seems to have the lowest volatility and the magenta option seems downright terrifying.

Well guess what — they all have the identical average return and standard deviation!

The blue series is taken from a real fund. The magenta series takes the exact same returns numbers and simply reorders them from worst to best while the yellow series juggles them to stay as flat as possible.

While the order of returns has a massive effect on the personal experience of the investor, it has no impact at all on the standard deviation calculations.

Ponder the first two graphs of US GDP and this third graph showing how sorting returns changes our perception of risk.

This is brain food for investors.

Next post: Weekend reading: Bitcoin is a bubble. Probably.

Previous post: Budget 2017: Can building more homes be a shot in the arm for slow-growth Brexit Britain?