This post is one of a series looking at returns in the decade after the financial crisis.

Commodities were hot in the early noughties. Prices boomed, they became easily accessible through the invention of Exchange Traded Commodities (ETCs), and the broad commodities story was amazing:

That list of selling points made broad commodities the dream diversifier.

Unfortunately it really was a dream, at least so far as the past ten years is concerned. Trustnet provides the chart that tells our story1: 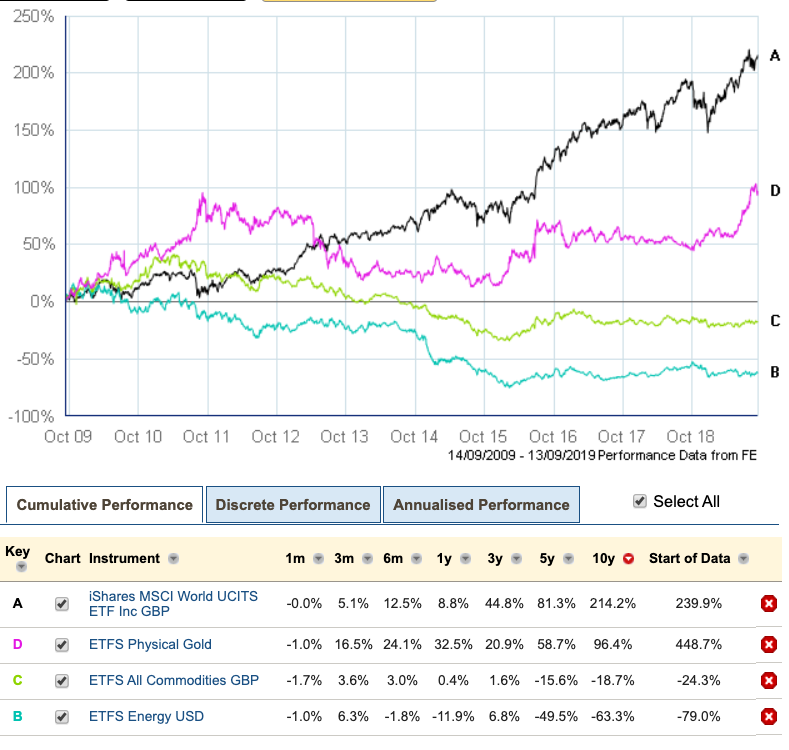 Subsequent research has poured hot and cold hogwash over the claims of equity like returns and reliable inflation hedging from commodities.

Meanwhile anyone living the dream woke up to high volatility and a decade of losing returns: -2% annualised over the last decade, or a -5% real return (see lime line C).

I looked at the ETFS Energy ETC due to its exposure to oil and gas (cyan line B). Oil’s boom during the 1970s was used as evidence that it’s a strong hedge against stagflationary recessions.

The oil price hit nosebleed territory in 2008 and despite the 2009 pullback, the rise of those energy-hungry emerging markets meant the oil price could only go one way, right?

That’s right, it went down. Subsequently the ETFS Energy ETC lost -9.5% annualised (-12.5% real), the worst performer of all in this review.

Maybe the gold bugs were right along? Physical gold had a tremendous Global Financial Crisis returning 90% between November 2007 and February 2009. Since then it’s brought in a 7% annualised return (4% real).

Not bad for an asset with an expected real return of zero.

Gold is meant to be valuable because of its low correlation with other assets and that bears out in the chart above. Compare the pink line D (gold) with the black line A (MSCI World).

I’ve stayed out of gold in my accumulation years due to its lack of expected return and dividends but there’s a case for it in a deaccumulation portfolio.

Note that in our last 10-year retrospective recap we discussed in some detail getting gold exposure via the gold miners. That’s as opposed to owning the metal itself, which is what we’re talking about here.

Are any readers keeping their faith with broad commodities as an asset class over the next ten years? Let us know in the comments below.

We’ll continue to gaze back 10 years to see how several other passive-friendly strategies have fared. Subscribe to get all the posts.

Next post: Weekend reading: The biggest lesson from the demise of Woodford’s empire

Previous post: Weekend reading: The on the cusp of a deal so let’s not jinx it by saying anything edition